A recent study indicates that, in the current drought, California is relying on groundwater for nearly 60 percent of its water needs, up from a more typical 40 percent. Why is that a concern?
During dry years, water agencies rely on groundwater because they don’t have supplemental water to import. Water agencies that can’t take advantage of groundwater have to take treated surface water. That has to come from somewhere, and it comes from a reservoir. Pretty soon those reservoirs go down. That’s a real problem in those areas.

Are groundwater supplies found throughout the Southern California region?
We are very fortunate in Southern California. For example, the San Gabriel Valley has a large groundwater basin that acts like a huge sand bowl that we can use to store or “bank” water during wet years and extract the stored water in droughts. The cities in the area take advantage of the fact that the basin can be recharged in one area, and the water can be pumped out and used in another area. People in the San Gabriel Valley are in good shape right now because of the banked water. The San Fernando Valley is a source of water for the L.A. Department of Water and Power, plus, to some extent, Burbank and Glendale. Some groundwater is produced in South Central L.A. Torrance and Hawthorne rely on groundwater. It is unfortunate that some of this groundwater is contaminated and needs to be treated. Once you get south of San Clemente, the amount of groundwater that’s available becomes very limited.

How is water stored underground?
The storage areas are aquifers. Aquifers are sandy material, so there is void space between the particles. Imagine a pail full of golf balls: There is a lot of empty space between the balls. That’s where the water is. A typical aquifer has 20–30 percent void space in it. These can be huge underground reservoirs.

Will desalination and increased treating and recycling of wastewater provide relief? And what about imported water?
Sea water is definitely very expensive to desalt. The cost is probably close to the future costs of imported water. Advanced treated wastewater is expensive, but it probably won’t be too long before the imported water will become equally expensive.

What’s your biggest worry about the state’s water crisis?
My biggest concern is that we won’t do anything. Climate change is going to have an effect on how the water comes to us. Let’s imagine that, due to climate change, our precipitation is in the form of rainfall, which it probably will be. The precipitation hits the ground, but it doesn’t stay there in the form of snowpack; it runs off. We don’t have the reservoir capacity to store that water or convey it to places where we can store it underground. We need to have places where we can park this water. 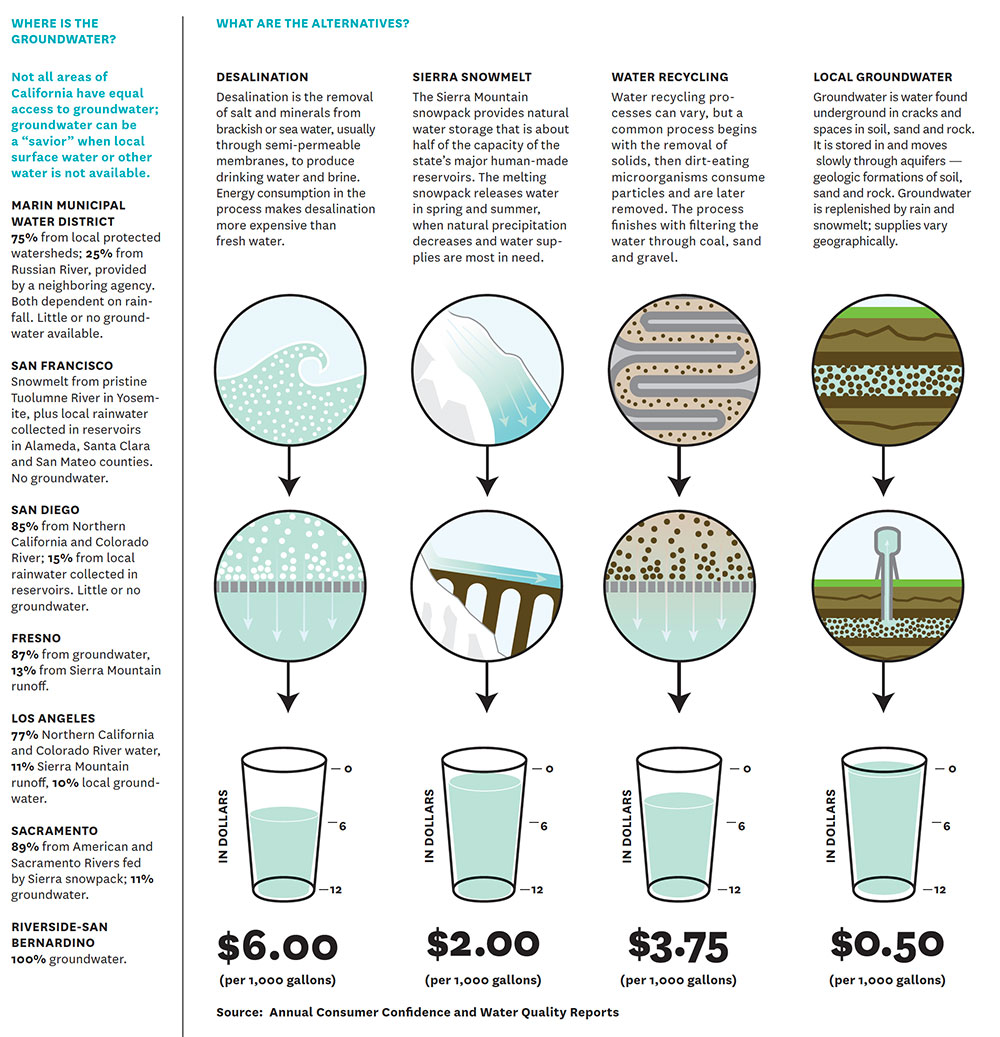