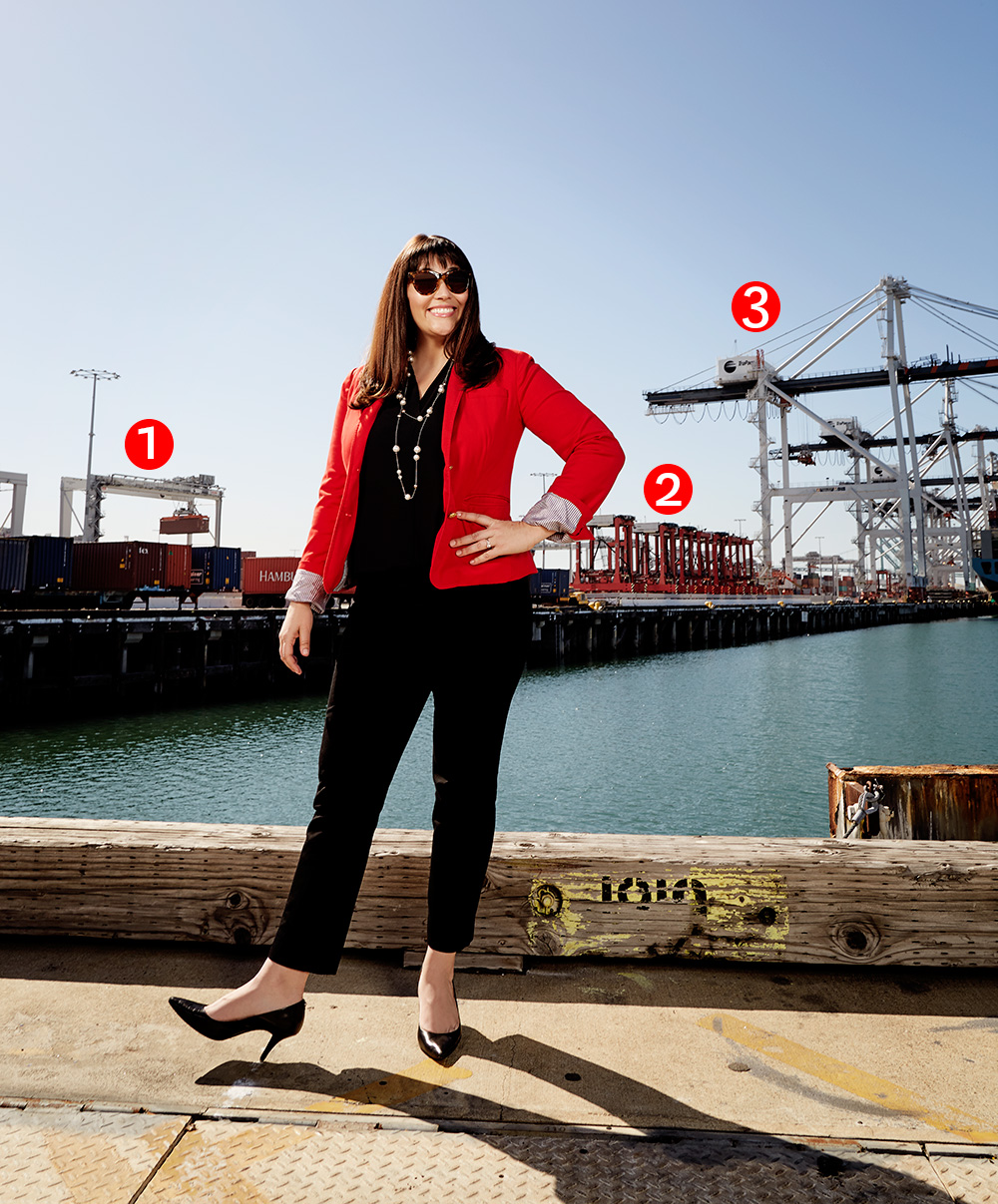 Adrienne Fedrick Newbold, a civil engineer with the Port of Los Angeles Engineering Division, earned a bachelor’s degree in civil engineering. She is engineering project manager of the TraPac Automated Terminal Redevelopment Project, a $210 million undertaking at the port that included the planning, design, construction and operation of 100 acres of the first automated terminal on the West Coast. The project came in on time and under budget. Newbold earned the ASCE Metropolitan Los Angeles Section Outstanding Younger Civil Engineer Award in 2013. One of Newbold’s favorite quotes is that of Ralph Waldo Emerson, who said “Nothing great was ever achieved without enthusiasm.”

“I’m a very enthusiastic person,” she says. “My team says my enthusiasm is what kept up their morale over the five-year period of the project lifecycle.”

1. AUTOMATED SHUTTLE CARRIERS
The automated shuttle carriers transport containers to and from the wharf to the waterside transfer area where automated stacking cranes pick them up for truck departure or to the on-dock rail yard for rail departure. The shuttles are guided by a system that uses a complex combination of GPS, laser sensors and thousands of magnets embedded in the concrete to monitor and navigate their movements — a technology that is the first of its kind in the world.

2. AUTOMATED STACKING CRANES
The automated stacking cranes are electrically powered, rail-mounted cranes that are operated by an automated terminal logistics system allowing them to sort, groom and prepare containers for truck or ship departure/arrival. The technology increases terminal safety and reduces air emissions.

3. SHIP‑TO‑SHORE CRANE
A ship-to-shore crane is a large, dockside gantry crane that loads and unloads containers from large container ship vessels. STS cranes run on electric power, not diesel, and are rail-mounted and 243 feet tall. Two to four cranes would usually unload and load a vessel, a process that takes about three days.

The Port of Los Angeles is the No. 1 port in the United States in volume and cargo value, handling 8.8 million TEU (twenty-foot equivalent unit) in 2016, or $272 billion in cargo value. An equivalent unit is a measure of containerized cargo capacity equal to one standard 20 feet × 8 feet container. Before the late ’50s, cargo arrived at the port in various forms, including crates and pallets. Unloading was time-consuming, and damage to cargo was significant. Containerization, then, arrived as a shipping revolution. In 1959, Matson Navigation Company’s Hawaiian Merchant delivered 20 containers to the port, beginning the port’s shift to containerization. Typical ships today carry 8,000 to 14,000 TEU, but last year the Benjamin Franklin vessel called at POLA, holding 18,000 TEU. The Madrid Maersk, the biggest ship in the world, holds 22,000 TEU.