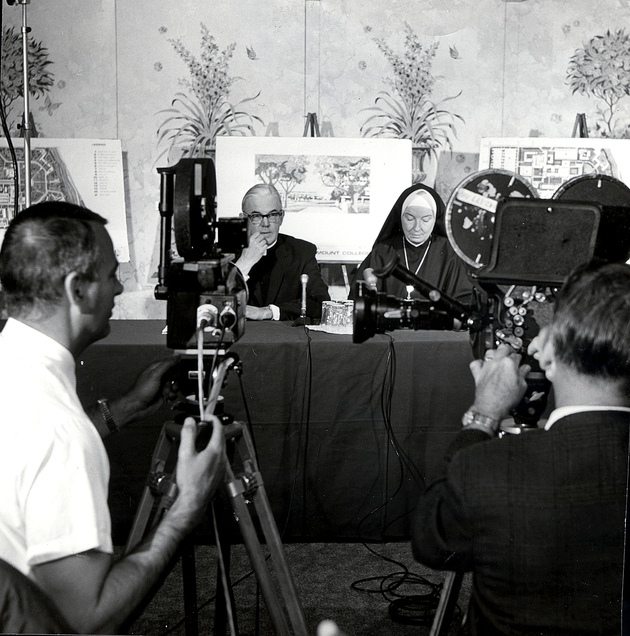 Both of its foundational institutions needed growth to survive. Marymount counted on increasing enrollment, but its Palos Verdes location was remote. Loyola saw that the future of higher education was coeducational. It needed female students. Other needs existed, too, but L.A.’s Cardinal James Francis McIntyre, who opposed coeducation, stood in the way. Yet, Loyola President Charles Casassa, S.J., and Marymount President Raymunde McKay, R.S.H.M., persuaded McIntyre to approve a joint venture — co-instruction, or affiliation.

Then began seven years of negotiations, evolving into a complex web of interactions involving trustees, faculty, alumni, provincials and heads of international religious orders. Almost all aspects of university life had to be re-examined, from facility-sharing to student governments and even the number of librarians. Both institutions feared the loss of unique culture and identity. Everything from fundraising to faculty jobs clouded the picture.

In September 1968, affiliation was achieved: Loyola-Marymount, Los Angeles became a reality, and Marymount’s female students moved into the newly built McKay residence hall that month. But affiliation didn’t solve every problem, including many that appeared at the start. At the root of it all, perhaps, were two fears. Kevin Starr in his new book, “Loyola Marymount University, 1911–2011” summed them up as Marymount’s struggle to maintain parity and Loyola’s desire to not give up the store.

Yet, by mid-1972, both parties were moving toward merging, if with some trepidation. Perhaps two signs of progress helped make the future possible: Loyola-Marymount’s unified fundraising efforts were going well, and the students were getting along just fine.

By July 1972, almost all institutional issues were settled, but deciding the university’s new name was a final hurdle. The resolution was a tough negotiation itself, but it also set in stone a commitment to both traditions.