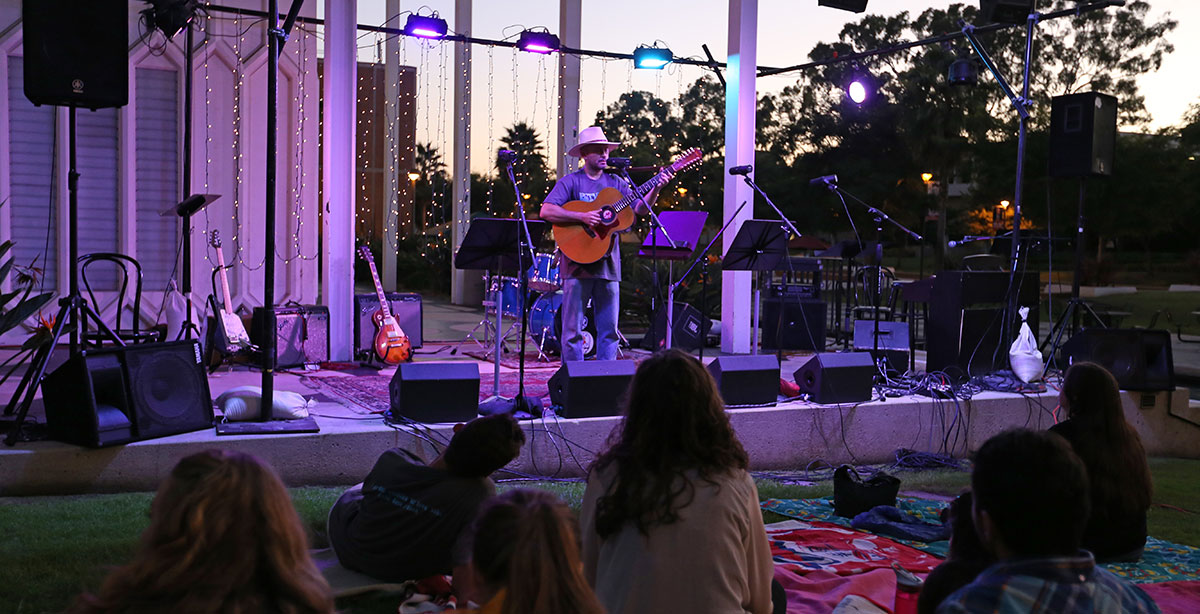 Every person in the theater department gathered outside Foley Hall that terrible night nine years ago after sophomore Sam Wasson died in a traffic accident on the way home from a student trip. Classmates, friends and teachers huddled together outside the building, in a spot now known as Sam’s Corner, crying, hugging and singing.

“We sang all night,” remembers lighting designer and LMU lecturer Johnny Garofalo M.B.A. ’03, then master electrician for the department. “It was horribly tragic, but it was magical.”

It still is. Every Oct. 23, the anniversary of Sam’s death, LMU’s theater community reconvenes at Sam’s Corner to sing and play Beatles songs — Sam’s favorite music. The annual concert is well known as BTLS4SAM and draws up to 150 people.

Current students who never met or knew Sam enjoy the music and camaraderie just as much as alumni, who return year after year. Sam’s parents come, too, grateful so many caring people remember their son so fondly.

“Sam was one of those people you always wanted to be around,” says Jason Sheppard ’97, M.A. ’15, technical director and theater instructor. “He was a larger-than-life person with a big smile, and he was always whistling or singing Beatles songs.”

BTLS4SAM began in 2008, on the first anniversary of Sam’s death, when Sheppard and Garofalo took the lead in replicating that initial spontaneous expression of love and inclusion at Sam’s Corner. The next year they turned it into a fundraiser, selling event T-shirts to help fund a scholarship in Sam’s name.

The evening features some 20 acts by students or alumni, from a cappella choirs to full rock bands, from amateur soloists to professional musicians — sometimes including Lukas Nelson, who spent a year and a half at LMU, and his brother, Micah (Willie’s sons), along with singer-songwriter Logan Metz ’10, Sam’s roommate. Each show ends with a heartfelt singalong to a different iconic Beatles hit.

“What’s crazy,” Sheppard says, “is that losing Sam was such a hard event for our department, and now BTLS4SAM is such a joyous occasion that people look forward to it.”