Not long ago, I handed my mother a copy of my résumé. “If you were an employer looking to fill a position and I had applied, would you hire me?” I asked in a voice tinged with all the hope and promise of a recent graduate. She gave it a cursory glance despite knowing its contents as well as I do.

“Probably not,” she said bluntly, and handed it back to me. In that moment, I watched, horrified and helpless, as my dreams seemed to sink unceremoniously into a black hole.

“There’s nothing wrong with your résumé,” my mother continued, gently. “But this is a difficult economy, and you haven’t been trained for a specific industry." Excellent, I thought to myself. In the midst of a recession, what employer would be willing to give me a chance?

The English language has a limited number of ways to describe people who are capable of work but without jobs, and most, if not all, of them have negative connotations. This is unfortunate, because unemployment can be a far more nuanced life stage than our society cares to acknowledge. At its most valuable, unemployment gives people the opportunity to step back and evaluate their options.

For me, an evaluation was necessary because of varied choices I made in college. I graduated with a double major in biology and history, although when I first started at LMU, I wanted to be a doctor. A semester later, I changed my mind. During one summer, I worked in a medical research lab. During the next, I interned at the J. Paul Getty Museum. After that, I briefly reconsidered medicine before finally ruling it out.

My indecision was my foremost challenge as graduation loomed. At that point, I would have ideally created a personalized guide detailing how I should handle my next 40 years. But from what I have heard, mapping out an exact career path is a largely futile exercise. Many of the working professionals I know, for instance, developed their careers by pursuing unforeseen job openings or acting on timely tips from colleagues. However, as my mother explained to me, some planning is required to obtain the type of skills training that gives job applicants a marketable edge.

From Classroom to Interviews
After graduation, my forays into job search websites repeatedly confirmed the importance of training and experience, especially during a recession. At first glance, employment sites seemed to list plenty of available positions. But the openings always fell into one of two categories: jobs for which I was obviously not qualified and jobs for which I was almost — but not quite — qualified. It seemed that in an effort to cut costs, businesses had either eliminated or chosen not to fill entry-level positions for which a recent college graduate might plausibly apply. “Try anyway,” people said, and in cases where I thought it was appropriate, I did. But disregarding a job description’s explicit stipulation that a viable applicant should, for example, have three or more years of relevant experience felt akin to ignoring the directions on a test in elementary school. Moreover, it was a waste of time. After reading a news article in which an employer listed the top reasons he rejected résumés (one was “applicant does not fit listed qualifications”). I decided to reassess my game plan.

My first task was to identify the kind of industry training I needed to better my job prospects. At the time, I was in the middle of a health development internship with the disease eradication programs at The Carter Center, former President Jimmy Carter’s Atlanta-based nonprofit. While there, I became excited about public health — a stimulating and meaningful intersection of my science and social science backgrounds. Once my decision to pursue graduate studies in public health had been made, I targeted my job search for positions more conducive to a gap year. Soon after, I was hired as an instructor at a national test prep company.

In the end, the recession job market is a simple case of supply and demand. When many unemployed applicants are competing for a limited number of openings, employers have the luxury of picking candidates who come with training and experience. This puts many recent graduates at a disadvantage, forcing them to compensate in other ways or to redefine their approach.

One of the simplest, most valuable lessons I have learned as a biology and history major is that the timing of larger movements — whether of an evolutionary, revolutionary, or, in this case, economic nature — has the potential to powerfully shape the course of an individual’s life. Had I graduated in a booming economy and immediately sailed into a job, my future plans and prospects might have been completely different. Employment opportunities may be thin now, but this challenge begets another kind of opportunity — one that allows undergraduates to better prepare for the options that will arise when the tide of the job market turns. 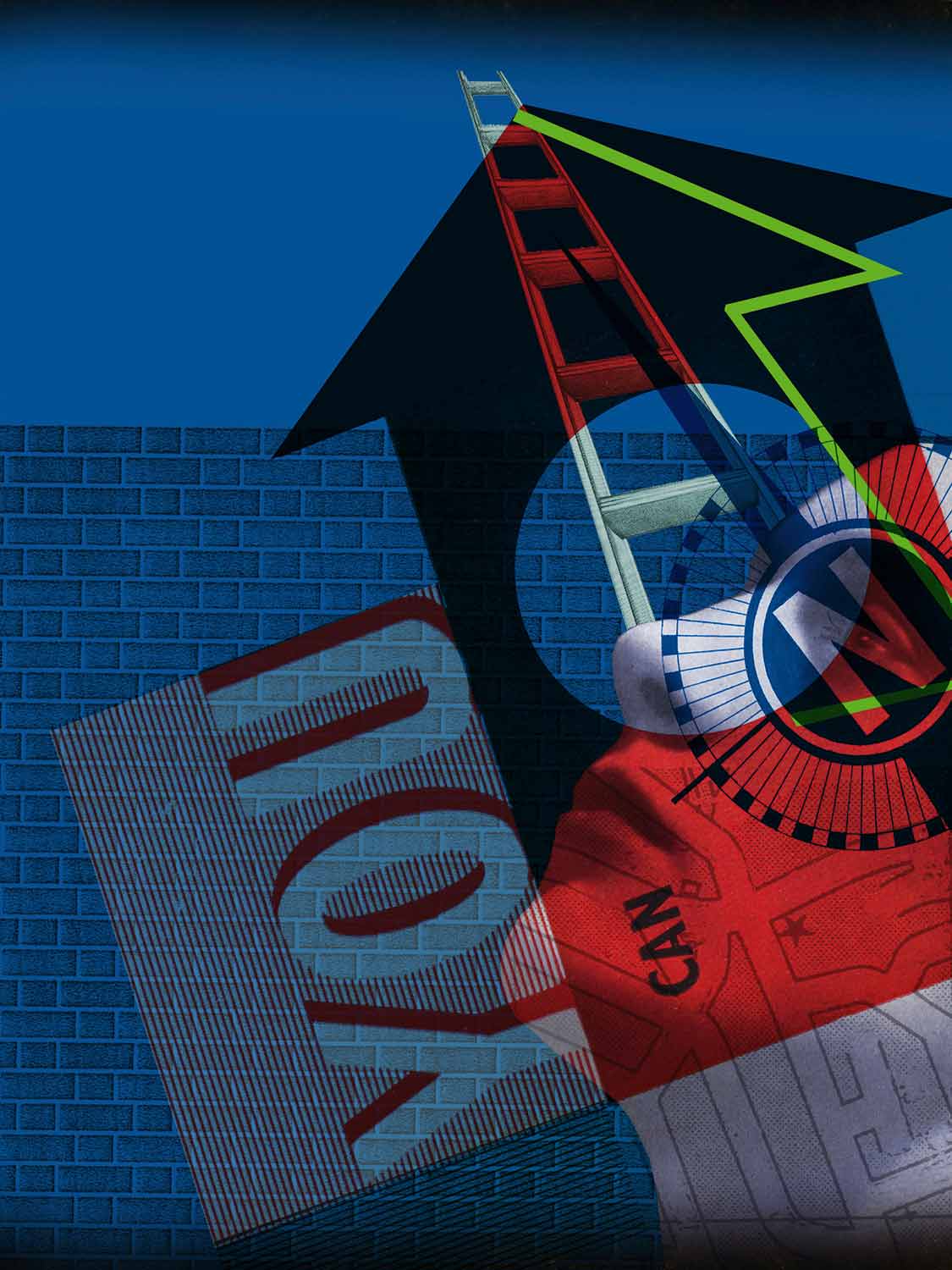 NOT AS BAD AS THEY SAY — Jonathan Perkins ’12

Unemployment is something I have yet to experience. I say this with as much humility as possible because I know that getting a full-time job before graduating from LMU is the result of several factors, one of which is simply being in the right place at the right time. But if luck is part of the equation, several other factors cannot be overlooked if you, a friend or a family member is having a hard time finding employment right out of school. My advice: Know where your passion lies, and follow that passion with a focus and determination that sets you apart from everyone else.

My passion is art; specifically, I enjoy working with clay and other materials to create innovative pieces. My love for art began with clay monsters as a child and evolved into giant science projects in high school and serious ceramics in college. I just love to imagine something and then make it. But let’s face it, earning a living as an artist is a hard, impractical path. So I turned to my next interest, biochemistry, for my major and an intended career. For me, LMU offered two worlds: science, labs and research with some incredibly inspiring professors on one hand, and hundreds of hours spent alone over a ceramics wheel on the other. So how did these two worlds collide and lead to a job?

Several days into the 2012 spring break, I received an email from my LMU art mentor, Professor Rudy Fleck, informing me that a car company in the area was looking to hire. Cars? Art? I really couldn’t imagine what the two had in common. Besides, I was already applying to graduate programs in biochemistry and trying to get interviews with biotech firms. I was well down the science road and pretty excited about it. But I decided to email the car company’s human resources representative because I love cars. (What 22-year-old male doesn’t?) At the very least, any response to my email would be a learning experience.

I was staying at a friend’s house near Lake Havasu, Ariz., when I was told I would receive a call from the company’s representative. I had sacrificed an amazing afternoon of boating with my friends for the chance to talk to this individual, a choice that was difficult to make at the time but that may have been the smartest thing I’ve ever done. Finally, the call came from Monique Perez, a Tesla Motors recruiter. I learned that Tesla was interested in hiring someone to join the clay modeling team full time at its design studio. I was taken aback because I’d thought automotive clay modeling was a thing of the past, and I assumed the position would be part time. I came to the realization that all those years of art might actually become useful. The fact that I’d be working with engineers and automotive designers was especially appealing because I work like an artist and think like a biochemist. Paying attention to details is the hallmark of both professions.

I made myself available for the interviews, regardless of time or place. I wanted the Tesla team to know that despite my youth, I was serious. I presented an unvarnished version of myself to them, putting my comically long hair in a ponytail and talking honestly about some of my failed art experiments and favorite hobbies (including brewing beer). And I asked a lot of questions. In my first meeting, the interviewer (now my boss) said, “I just had to meet you because I’ve never seen a résumé like this before." I guess art awards and science research don’t often collide.

Once Tesla offered me a job, I agreed to start right away even if it meant dropping a final semester course I really wanted to take and forgoing the post-college trip to Europe I had planned. As it turned out, I didn’t have to do either (thank you, Tesla), which was a great way to finish my LMU years.

Luck + Passion + Preparation
To say my fledgling career is a risk is an understatement. I don’t make a lot of money, and I am very much a trainee; I still need to prove myself. In many companies, a position like mine would be little more than an internship with benefits. But what stands out is that a true working future lies before me in a field I didn’t know existed and was open to me only because I never let go of my first and foremost passion: art. I chose to go to LMU specifically because of its excellent ceramics offerings in studio arts even though I knew I would major in something else. Turns out, that was a key move. So thank you, LMU. Thank you, Professor Fleck, and thank you, Professors Jeremy McCallum, Emily Jarvis and James Roe, who challenged and guided me in science, enabling me to work in a professional environment.

As I said, chance and luck are factors in finding employment. However, there are a number of other favorable qualities that are undoubtedly controllable, like holding on to your passion. Identifying and exemplifying those qualities through action and choice will most likely tip the scale in your favor with regard to finding employment.