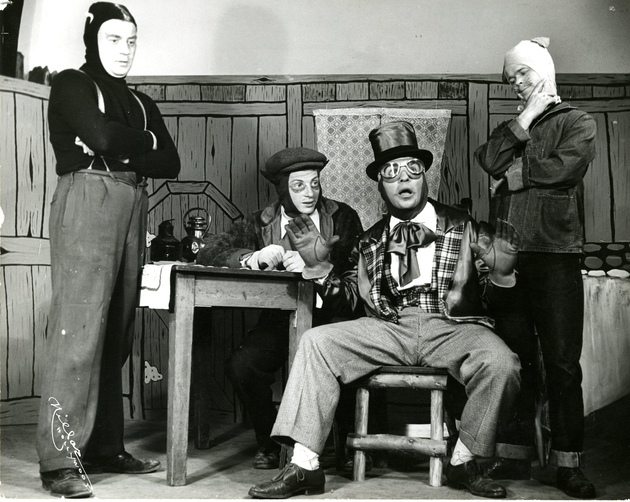 In February, LMU student actors costumed as zombies and festooned with fake blood took to the stage for a final curtain call on the 2010–11 Del Rey Players season.

The Players are the bluff’s enduring student-created and student-run theater group. Founded in 1931, when Loyola University was home to only a clutch of structures and 250 students — all male — the Players over the decades have mounted more than 200 comedies, dramas and musicals.

The Players evolved from a live radio troupe that broadcast out of St. Robert’s Hall. For 76 years, they were designated as an LMU “club.” Three years ago, the Players were elevated to “university program.” This status update put the Players on par with the Loyolan, KXLU and the Tower yearbook, and provided the troupe with funding and a staff advisor who serves as liaison to school administrators.

But all that nomenclature was far from Players’ minds on that February night, when those students-as-zombies sprayed confetti into the cheering crowd at the conclusion of their double-feature performances of “Dark Matters” and “Night of the Living Dead.” In lieu of taking a traditional bow, the students-as-zombies tap-danced to the song “Puttin’ on the Ritz.” They gestured in appreciation to their colleagues in the crew, off-stage. Then they raced back to their dressing rooms, whooping and hollering in a collective catharsis.

“It was a big, big moment and a really nice culmination of the past three years and all of the efforts and the wondering, ‘Why do I work myself to the bone so much for this?’ ” says Sara Garcia ’11, artistic director.

Garcia answered her own question. “This is why,” she says. “These feelings, the sense of love, and the sense of the theater world that we have here is worth all of it. Every sleepless night, the late-night calls, coming in early to figure out stuff — all of it was worth it, because we did it together.”

DEL REY BLOOD LINES
Togetherness is a theme that comes up regularly in conversations with Players past and present. Julie Leveque ’07 was practically born into the group. Her mother, Carolyn Bauer, administrative assistant in the School of Film and Television, and her father, Tom Leveque, were early 1970s members. Her sister, Holly Leveque ’11, took the stage, too, sharing the spotlight with Julie in 2007’s “Alice’s Adventures in Wonderland.”

“I love the Del Rey Players with all my heart,” Julie Leveque says. “Growing up, I loved listening to my parents and their college friends talk about the shows they did. I knew I wanted that same experience.”

Deborah Payne Fisk ’74 was one of those college friends; she’s now a professor at American University specializing in dramatic literature and theater history. “We were a very tight cohort,” Payne Fisk says of all the Players.

Tight enough, Payne Fisk says, that during one production, amid all the late-night rehearsals, study sessions, jobs, sharing of coffee cups and — yes — cigarettes, the Players were hit by an outbreak of a contagious illness. “It was awful,” Payne Fisk says. “Something like half the cast was felled with mono.”

Tom Caramagno played Snoopy to Payne Fisk’s Lucy in half of the Players’ performances of “You’re a Good Man, Charlie Brown.”

Caramagno was involved with the Players from 1965 to 1974, as he worked on his B.A., two master’s degrees and a Ph.D. “It was totally a labor of love,” Caramagno says of the Players. “It was more like community theater. You had people with other things going on in their lives, but they had the spark. They wanted to be on stage for a little while.”

Speaking of stages, beginning this fall, the Del Rey Theater, located at North Hall 102, will be renamed the Del Rey Studio. By either name, the facility was closed to the Players this year, with infrastructure repairs scheduled to occur this summer.

That meant the Players went on the road to perform two of their 2010–11 productions at Westchester High School. The group was familiar with the space, having previously stepped in during LAUSD budget cuts to become almost the de facto directors of the high school’s drama program.

Being peripatetic is old hat for the Players. In their infancy, they performed at iconic Los Angeles venues such as the 1,270-seat Wilshire Ebell Theater, on Wilshire Blvd., as well as long-gone Carthay Circle Theater, on San Vicente Blvd. Later performances took place everywhere from Sacred Heart Chapel to a federal prison in Lompoc, Calif., where “The Bat” was staged.

THE LITTLE THEATER
In time, the Players made a home at LMU’s Little Theater, in what is now North Hall, until 1968 when the theatre department opened. The Players then moved into a small rehearsal studio in the Foley building, Bauer says. Then-faculty member and Players director Paul W. Kaufman and friends sawed wine barrels in half to create seats for the facility. Fire marshals nixed the finished wooden products, but the “Wine Cellar Theater” name stuck.

Caramagno recalls fondly the venue’s intimacy. When the troupe presented a performance of “The Teahouse of the August Moon,” a wet goat was brought in from the rain to play its part, and Caramagno remembers watching the audience react, row by row, as the beast’s odor drifted through the house, from front to back.

Tending to livestock isn’t a typical Players’ responsibility, but just about everything else is. Since the group’s founding, students have handled the business and creative aspects of running what Players Staff Advisor Lydia Ammossow calls “a co-curricular, para-professional experience in which students have the opportunity to run a real-life theater company.”

In addition to Ammossow’s role, faculty members serving as play directors is the other historic exception to the Players as student-only group. Examples of such directors include the barrel-sawing, beloved Kaufman and his immediate predecessor, A. Martial Capbern.

Despite differing directing styles, each of the two men kept to the Players’ intent of producing mainstream — not experimental — theater. “Our program,” Capbern wrote during his employ, “is slanted to entertainment rather than to academics.”

That distinction distinguishes the group from the Theater Arts Department. “With the Del Rey Players, you don’t have to be a theater major,” Nicole Rossi ’09 says. “The theater department is more geared towards students who are looking to create themselves a career in theater.”

Rossi, who directed “Urinetown” for the Players and served as the group’s president, now works as a professional stage manager. She keeps a binder filled with 20 cast, action and other photographs from the Players’ history. One image shows actress Ingrid Bergman touring the 1947 presentation of “Ah, Wilderness.”

Myriad connections exist between the Players and the entertainment industry. A playbill, for example, from 1933’s “Berkeley Square” production thanks four major motion picture studios for their “generous assistance.” Bing Crosby is listed as a patron in multiple programs from that era.

Actor and painter Dwayne Hickman ’57 was a television star before, during and after his time at LMU. Though in school, he was a star on the “The Bob Cummings Show,” with little time to join the troupe’s productions. But he did attend Players’ performances, including those featuring Bob Denver ’57, Hickman’s future co-star on the hit show “The Many Loves of Dobie Gillis” and star of “Gilligan’s Island.”

“They were very well-thought of,” Hickman says of the Players. “They attracted a lot of attention and did good shows.”

80-YEAR CELEBRATION
That attention will be front and center again on Sept. 25, 2011, as part of the 2011 Alumni Reunion Weekend. Among the many celebrations that weekend will be the Players’ 80th anniversary reception and reunion. The gathering is likely to feature a tour of the renovated Del Rey Studio, a champagne toast and a preview of the first piece the Players will perform, for the Bellarmine Forum, during the 2011–12 season.

Of course, before Players can become party to this sort of alumni curtain call — with or without the tap-dancing zombies — a would-be Player has to first work up the gumption to join the troupe.