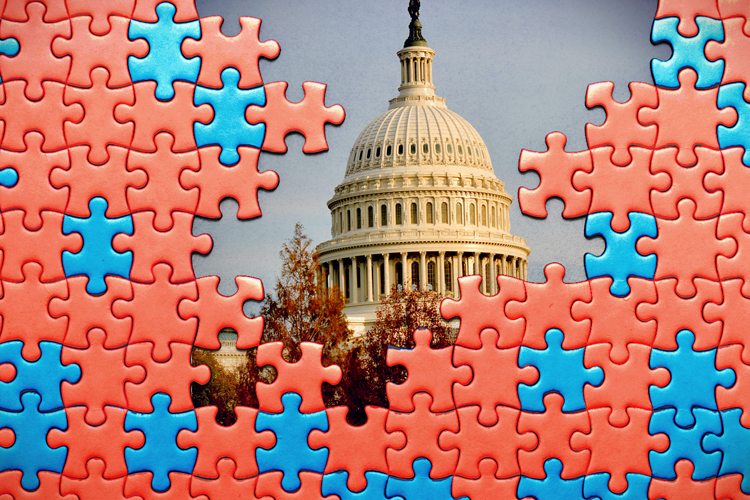 After years of avoiding cases involving partisan gerrymandering, the U.S. Supreme Court announced this past June that it may be willing to draw a line. In October, the court it will hear arguments over Gill v. Whitford, in which a Wisconsin district court found that the drawing of the state’s state legislative districts violated the Constitution.

At its most cynical, gerrymandering could be defined as the process by which the boundaries of voting districts are drawn to waste votes. Sometimes the votes of one political party or ethnic group are jammed into a single district, known as packing, to minimize voters’ impact elsewhere; in other cases, those voters are spread thinly across multiple districts, known as cracking, so that they have minimal effect across the board. In any case, although gerrymandering cases often have been taken into the courts, it can be difficult to identify and legislate against the practice.

We spoke to Justin Levitt, a nationally recognized expert on election law who is a professor of law and associate dean for research at Loyola Law School in Los Angeles. From 2015–17, he served as deputy assistant attorney general in the Civil Rights Division of the U.S. Department of Justice. Levitt was interviewed by Scott Timberg, a frequent contributor to LMU Magazine.

In the grand scheme of things, how important is the Wisconsin case Gill v. Whitford?
This case is a big deal. For those looking for one silver bullet to fix everything, it's not going to do that. But it will reshape the rules on how district lines are drawn, and not just congressional lines but state legislative and local lines all over the country. It could provide a lot of instruction to the people drawing those lines. In many areas of the country, partisan gerrymandering runs to excess, and the court has the opportunity to cut off that excess. That’s a big deal.

Despite the fact that gerrymandering has been part of the American experience from the nation’s beginnings, the Supreme Court has typically shied away from gerrymandering cases. Why has it been reticent?
Dipping a toe into redistricting involved so many political and partisan choices that the court felt it was not for the court to go there. The court had a real hands-off view, with a few exceptions. Earl Warren, chief justice of the court from 1953–69, said the single most important cases he decided were the equal population cases, the ones known as one person-one vote.

We see this when nominated justices come to confirmation hearings, right? At his hearing, Chief Justice John Roberts said he was not an ideological being, but just an umpire who calls balls and strikes.
First of all, the power to decide what’s a ball and what’s a strike is an enormously important power. If I could change the size of the strike zone, I could revolutionize the game even if I were just calling balls and strikes.

The court has certainly not been shy in taking on hotly contested issues, including those involving its own power. Right from the get-go, there was a question about whether the Constitution gave the Supreme Court — or any court — the power to strike down any congressional laws. That’s a pretty contested issue. The issues about slavery, equal rights, abortion — the court has touched an awful lot of hot button issues over time. I don’t think the court deludes itself by thinking that it is an entity without impact on the political sphere.

Since the ’60s, the court has become more comfortable in throwing its weight around, specifically in the constitutional process of elections, and that includes district boundaries.

This reminds me of Justice Potter Stewart’s comment about obscenity: “I know it when I see it.”
Or at least, “I know when I haven’t seen it.”

The last time the court really tackled the partisan gerrymandering issue in detail was 2004. All nine justices said, “Too much partisanship in the process is unconstitutional,” although they disagreed on how much was too much and who should decide.

So, they laid down a principle, but didn’t define it.
Yes, that’s as far as they got. But their principle was theoretical. Since then we’ve been sitting basically there — teetering on the edge of a standard that can be articulated. This is the first time the issue has come back up before the court in a way that may lead to some incremental clarity. They might say, “We’re out of the business [of deciding].” They might say, “We’re in the business [of deciding], and we know it when we see it, and this is it, but we’re not gonna’ tell you what else is it.”

We don’t know how this case will be decided, but it seems likely that one or more justices will need to be replaced, to be nominated by the current administration and approved by a Republican senate. Do you have a sense of how the court’s handling of redistricting might change as the court’s composition changes?
The way to think about it is like an aircraft carrier. It moves, but it moves slowly. It doesn’t often pull a U-turn. The courts will probably do mostly what they have done, with a few changes around the edges. If they decide firmly on a question, it’s rare to see them radically alter course. But there are all kinds of new questions that can come up.

Does the Supreme Court pay some attention to broad, gradual changes in public opinion? Has increased attention to gerrymandering shaped the way the court views the issue?
I think public opinion has had some impact on the margins. When the justices sit down and take a look at the Constitution and the existing law, I don’t think they follow public opinion closely enough to be swayed by something over and above what the law requires. But they have taken note of some structures that have cropped up in states to remove some of the more damaging aspects of partisan gerrymandering. I think members of the court have picked up on a groundswell of people trying to come up with alternatives.

We’ve seen this in California: Former Gov. Arnold Schwarzenegger, a moderate Republican, is working against gerrymandering.
Yes. The court has also seen the rise of some bitter polarization among legislators and the public. The connection between that polarization and the district lines are anything but clear, but I think the justices may be wondering if some of the redistricting is driving some of the polarization.

Coming back to the Gill v. Whitford case, let’s say the court decides there’s a violation and comes down against the district boundaries as drawn by the Republican Party. Would that erode the court’s reputation for integrity, particularly in the public’s perception?
I don’t think so. I think it’s been well-proven that what people believe about Bush vs. Gore, for example, depends largely on whether they’re Democrats or Republicans. I think there is less danger here, because people feel less viscerally about a specific state legislature. And this issue really cuts both ways: Democrats are upset in Wisconsin, Republicans are furious in Maryland. I think people recognize that there is ample incentive for state legislatures to gerrymander along partisan lines, no matter who is in charge. But the court isn’t so concerned about undoing maps of the past as in putting in place rules for the future.