If ever foreign news bureaus were useful, they surely are now when it comes to China. On almost every front, the Middle Kingdom is asserting itself on issues ranging from building bases in the South China Sea, to organizing international trade pacts, targeting Taiwan’s status as an international actor, and moving forward in technology innovation. China even aims to catch up to world soccer. We asked journalist John Corrigan ’77 to give us an eyewitness account of life in China’s capital, Beijing. Here’s his report. 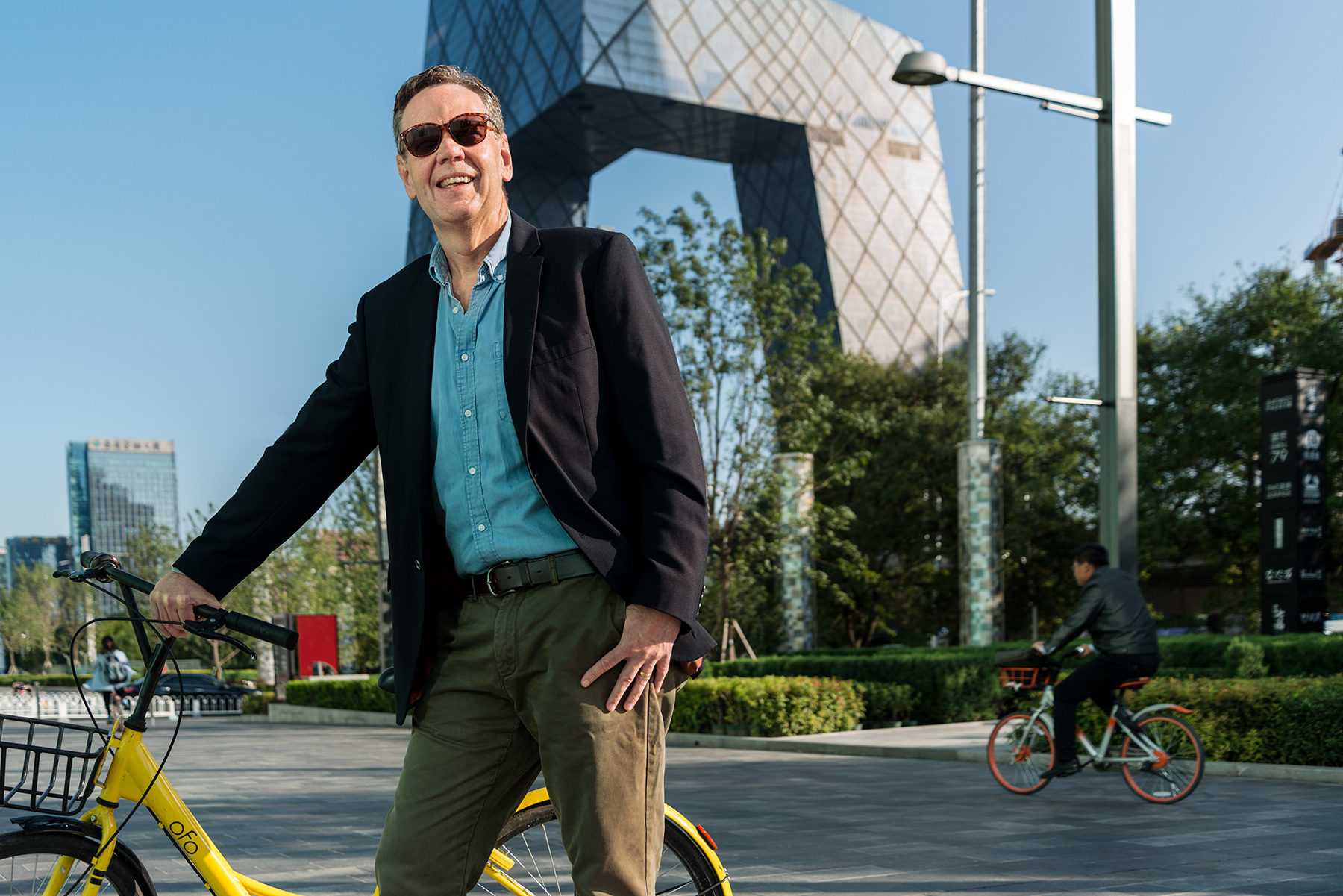 John Corrigan is based in Beijing as China business editor of The Wall Street Journal. He oversees coverage of topics including technology, consumers and entertainment. He has edited recent stories on China’s use of facial recognition and other technologies for surveillance. Corrigan previously was the assistant managing editor for arts and entertainment at the Los Angeles Times and business editor. He was project editor of “The Wal-Mart Effect,” 2004 winner of the Pulitzer Prize in National Reporting. He also led the Times’ investigation into Toyota’s sudden acceleration problem, which was a Pulitzer Prize finalist in 2010 and won journalism’s Gerald Loeb Award. At LMU, he earned degrees in communication arts and political science from the Bellarmine College of Liberal Arts.

The posh hotel lounge in Beijing offered a snug retreat from the bleak December night, but it wasn’t the frosty air that was on the minds of journalists at the holiday bash inside. It was the gunk floating around in it.

An air-quality index app is a must if you work in China’s capital, and the revelers at the Foreign Correspondents’ Club of China year-end party traded readings as the particulate numbers climbed higher throughout the night. The AQI crested 500 around midnight. That’s officially considered hazardous.

If foul air was one distraction, Donald Trump was another. A day before, the president-elect breached decades of precedent by accepting a congratulatory phone call from Taiwanese President Tsai Ing-wen. That infuriated the Chinese government, which wants foreign leaders to pretend there is no Taiwanese president. The Trump-Taiwan story would dominate the news cycle for days, and those journalists still working on follow-ups wouldn’t be toasting another year in China this night.

The dozens of others sipping drinks and sharing gripes were a testament to the strength and esprit de corps of the foreign press corps here, a refreshing sight to someone who has seen both come under stress in the U.S. Whether it’s a bull session at the bar after work or a news media convention of some sort, it’s tougher than ever to pull a big crowd of reporters and editors these days amid the great winnowing that’s been going on for nearly 20 years now.

But in China, so many things are different. Air pollution is at its worst in winter, cars don’t yield to pedestrians (I mean, they really don’t yield), and journalists don’t seem in quite as short supply.

The latest directory from China’s Ministry of Foreign Affairs lists hundreds of foreign journalists from 50-odd countries in Beijing alone. The world’s major economies are here in force — Japan has 17 news organizations represented and Germany has 20. The U.S. has 32, including The Wall Street Journal, which hired me as its China business editor in 2016.

In the Journal’s Beijing bureau, we take turns attending the daily press conference put on by the foreign ministry. Scores of reporters attend, and the big briefing room gets especially crowded when President Trump has tweeted something about China or when North Korea has launched another missile. My tape recorder batteries turned up dead just before a session when China’s views would be demanded on both Trump and North Korea; thankfully a reporter from the Russian news agency RIA Novosti gave me her spares. The ranks of foreign correspondents may have thinned a bit here over the years, but for Americans living in towns where there’s no longer a local paper, it may be easier to get news from China than it is from their own city hall.

If the foreign press corps here is robust, then China’s domestic news army is massive — thanks of course to the wonders of state support. It’s not exactly the kind of reporting Americans are accustomed to, but major news events are covered, and there are the occasional exposés into topics one presumes have been declared safe to expose.

The Chinese press can be seen in full force during the annual political jamboree known as Lianghui, or Two Sessions, held in Beijing each March. More than 3,000 journalists were credentialed for Two Sessions, so-called because it refers to concurrent meetings of the National People’s Congress.

It has all the appearances of a significant news event, but it seemed a bit like what American political conventions have largely become — a staged event, with the realpolitik taking place somewhere else.

So why China? There is so much here that Americans should know about. I guide the Journal’s business and technology coverage in China, and it often seems as if I have stepped five years into the future.

Everyone does everything via smartphone, from paying a restaurant tab to taking out a college loan. China is also at the cutting edge of surveillance technology, as we chronicled in a recent Page One story on facial recognition. This technology is emerging globally, but nowhere more profoundly than in China, where authorities are using facial recognition on public streets and in subway stations, at airports and at border crossings. More significantly, China stands out by harnessing facial recognition technology to influence social behavior — such as setting up cameras at crosswalks to identify and publicly shame people crossing against a red light. Who knows how things might evolve from there.

As with any assignment, there are drawbacks: distance from family and friends, and those cold, polluted days of winter. But few stories can beat China at this point in history.