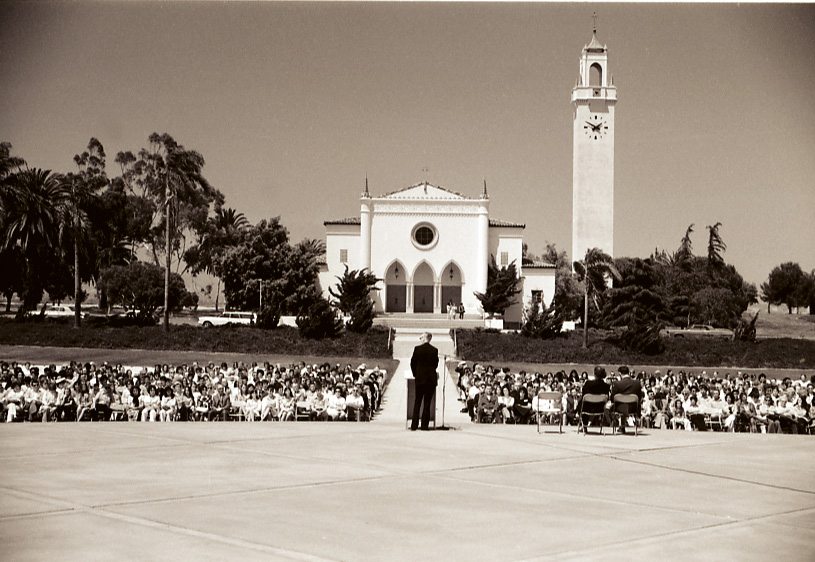 A century ago, the Jesuits opened their new institution, Los Angeles College, for student registration. They were offering a secondary education, with the promise of a college curriculum to come. Seventy-eight young men — boys, really — showed up, as Kevin Starr tells the story in his “Loyola Marymount University, 1911–2011: A Centennial History.” They had no desks. In fact, the Jesuits had no furniture. The tuition fee was $5 a month.

The Jesuits’ college became certified to offer bachelor’s and master’s degrees in 1914, when it acquired the necessary California state charter. As of 1926, high school, college and law students were all being educated there.

If the admission process was idiosyncratic in the 1920s, then it may seem hard to believe that in 1966 things still could be informal. That’s what Mitch L’Heroux remembers. He became Loyola University’s first director of admission in 1966, hired by President Charles S. Casassa, S.J., serving until 1990. L’Heroux recalls that admission was a fairly clerical process. Students submitted school records to the Registrar’s Office, and the dean decided their fate. A financial aid office came a year later.

In 1966, L’Heroux says, Loyola University enrolled about 265 first-year students. The undergraduate student population numbered about 1,400. But soon the enrollment began to increase dramatically.

During the 1970s, LMU’s acceptance rate — the percentage of applying students to whom the university offers a spot — was about 75 percent. Recruiting broadened from Catholic high schools to public schools and community colleges. After the merger, recruitment focused on students, especially women, for the College of Communication and Fine Arts and other programs that originated with Marymount College. In the late ’70s, the first admissions officer for African American recruitment was hired.

Today, the college admission environment — with the Common Application and the Internet as a major source of college information, for example — would probably be unimaginable to students of the ’20s, ’30s and ’40s, perhaps even the ’50s.

Applications for the class of 2016 — the class that will enter this coming fall — numbered 11,824, 6 percent higher than the previous year and the seventh consecutive year for which applications increased. About 1,250 will be enrolled. The Class of 2015, which entered this past fall, had an average 3.7 GPA, with SATs averaging about 1,807 (on the modern 2,400-point scale). Today, LMU casts a wide net, recruiting nationwide and in Asia, Latin America and Europe.

A century ago, with not even a desk, a new student must have found the path daunting. Ten decades later, the desks, and so much more, are here. If an LMU education is still daunting, it’s probably for the right reasons.