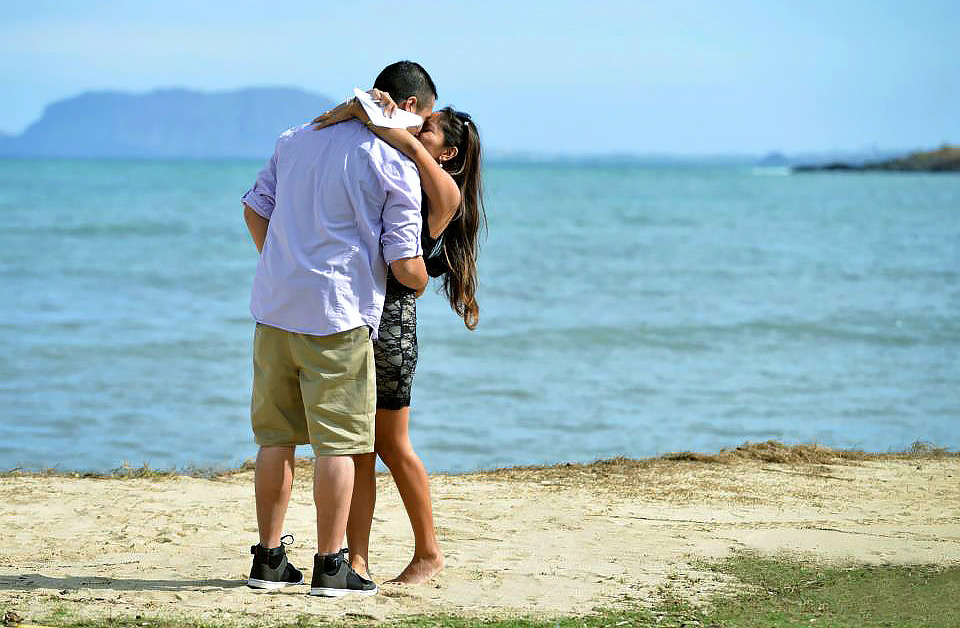 When Shalimar Zabanal ’06 found the replica of Aladdin’s lamp, she suspected some magic was coming. The lamp was part of a series of clues for a scavenger hunt her mother had devised. The clues were scattered around Kualoa Park on Oahu in Hawai’i, where she grew up.

Shalimar had returned home in 2012 when her father passed away. Family ties are very important to her so she wanted to be home during that difficult time. The reason for the outing to Kualoa Park was to take a family photo, and the game was just for fun; her mom, Leorosie, enjoys doing things like that. Shalimar had no reason to suspect anything unusual was about to happen. Her boyfriend, Bryant Verador ’06, was back in L.A., or so she thought.

Bryant, who had been Shalimar’s boyfriend for eight years, put his plan into action. He caught a flight to Hawai’i without Shalimar knowing and was met by her family. Bryant hid out with Shalimar’s siblings for three days without being discovered. He was getting ready to be found.

The lamp held some meaning for Shalimar. She’s a big fan of Disney, and all that goes with it: boy meets girl, happy endings, all of that. Inside the lamp was a note, directing her to a particular spot in the park.

During their sophomore year, Bryant ran into Shalimar outside Rains Hall. She was standing with a group of friends, and he was rushing to his job at Burns Recreation Center. He apologized for the unintended contact, but then he lingered to connect with her, making him late for work. He asked her out, and they’ve been together since.

In Kualoa Park, Bryant waited, the answer to the clue in the lamp. And then, to Shalimar’s surprise and delight, when she found Bryant, he had a speech prepared so he wouldn’t get flustered. He ended with “Will you marry me?”

Her answer: Yes. They were married Dec. 13, 2014, on Secret Island in Kualoa Park, with their families and friends surrounding them.

Shalimar (Zabanal) Verador ’06 earned her degree in communication and minored in Asian Pacific Studies. She is a finance and accounting recruiter at Roth Staffing Companies in Century City, California. Bryant Verador ’06 earned his degree in marketing and management and minored in Asian Pacific Studies. He works as a digital marketing analyst at Activision Blizzard in Irvine, California. They live in Venice, California.

John Kissell is a writer and editor with the LMU Division of Marketing, Communications and External Relations. He joined LMU in 2009 after 25 years on the news desks of the L.A. Times and The Daily Breeze. Kissell also teaches news writing and editing for the Journalism Program in LMU’s Department of English.