When Timothy Law Snyder, Ph.D. gave his inauguration address in October, he outlined a vision for Jesuit higher education rooted in magis, which he defines as the restless urge to do more for those who are here, for those to come, and for the earth itself. A few weeks later, we met with LMU’s 16th president to explore that vision further. Snyder was interviewed by Editor Joseph Wakelee-Lynch.

The obvious one is getting to know everybody. A major goal for me is getting to know the community. That’s faculty, staff, students, administrators, alumni, foundation officials, members of three religious orders, the archbishop’s office, governmental officials, key players in Los Angeles, Playa Vista and more. That’s a major undertaking. And not just getting to know them but being able to understand what they do, why they do it, what they believe in, with whom they work and what their accomplishments are.

What is a university president’s greatest power?

The greatest power is the range of people with whom you can communicate. Internally, you’re communicating with faculty, staff and students. Externally, you’re communicating with alumni, government leaders, corporate and foundation representatives, and others. As president, you have the ability to draw them together around commonalities. What you’re really doing is harnessing the power of ideas and experiences of others. That’s the greatest power.

In your inauguration address, you emphasized imagination and creativity, suggesting they can influence not just programs but the university’s culture. How does a president accomplish that?

As president, you’re trying to create conversations. An important question within any institutional culture is, “How open are we to new ideas?” When somebody presents something new, we as a community should ask ourselves, “How might we respond to that?” If we’re quick to judge, we can miss the opportunity to experience the idea in full. We need to look at the new idea through the mind of the person presenting it, so that we can see the value as its ideator sees it. From there, we can make connections, correlating ideas thematically. At LMU, culturally, we need to be more thematic than we have in the past. We have a vast cauldron of ideas and conversations that any institution must have and thrive on. We need to find a way to enable them toward common goals.

How does your background shape the way you see leadership?

Having taken the traditional academic path — pre-tenured faculty member, tenured, department chair, dean, VP and so on — has helped. My music career helped because it gives me an aesthetic dimension, and I ran the business part of it using what I learned in accounting courses. I did all the accounting myself. As a mathematician, you’re always kind of digging in an underground cave. You sense something is true, and you have to prove it. So you try a proof technique and make a path, but it doesn’t go anywhere. You never know whether you are one swing of the pickax from your solution, or whether you have to back out and start again. That process teaches you persistence, gives you practice in knowing when to give up and brings you mountains of practice in mitigating failure.

Is there an episode of failure in your life after which you could say to yourself, “I learned something,” and what did you learn?

When I was at Georgetown, we had a novel idea to build a cybercafé in a back stairwell that used to be the main entrance of the science building but had become an entrance to a parking lot. So it wasn’t being used. I found a donor, and we really hit it off — he was going to pay for the café. At that time cybercafés were brand new and few in number, and ours was going to be extraordinary by virtue of the donor’s vision and the size of his gift. Some of the older faculty thought it would ruin the building. I didn’t realize that people actually still saw the back stairwell as the grand entrance of the building. I caved and probably shouldn’t have. We ended up for the most part losing a donor and a novel, great experience. It could have brought more people into the science building. Nobody would go in there other than the scientists. When I left, some of the very people who argued against the café said to me, “Well, we should’ve listened to you.” I think I broke down a little too early on that one. 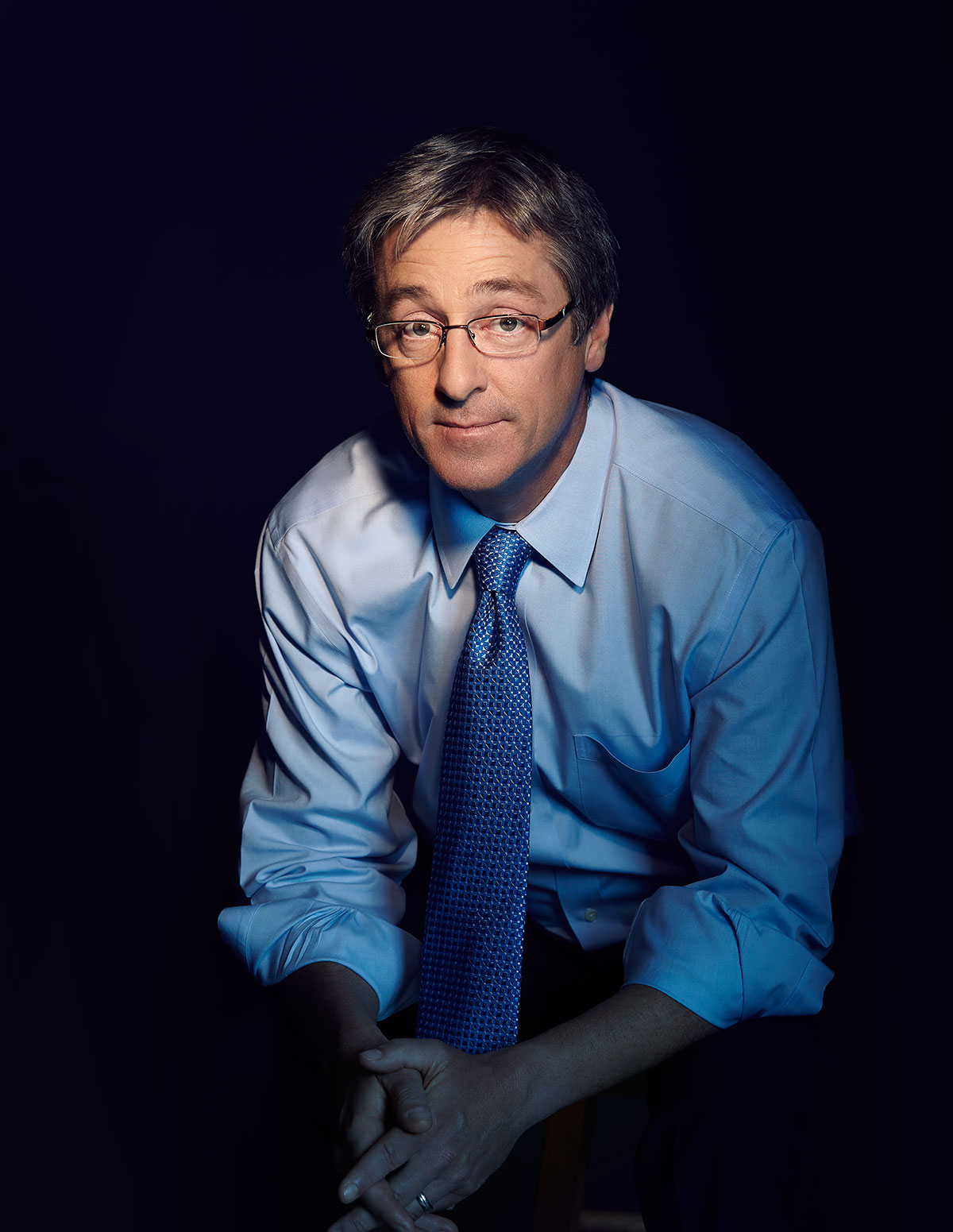 As someone who is both a mathematician and a musician, do you ever feel torn between your left brain’s information processing and your right brain’s creativity?

They’re cross-chatting constantly, incessantly. So I never feel any conflict there. They’re in sync. The corpus callosum, the bundle of nerves that connects the two halves, is active.

So what’s the fun part about the fact that, in your head, the brain’s two halves are chatting all the time?

You just have a sometimes beautiful, sometimes scary, sometimes annoying, electric field of ideas. And the question is, how do you get current flowing as opposed to static. I never think of anything as a right-brain activity or a left-brain activity. It’s hard to separate them.

You’ve said you would like an even more robust study abroad program, and you cited Asia as a place of opportunity. What do you hope LMU’s presence in Asia looks like in 10 years?

As we know, Asia is a lot closer, so to speak, than it has been in the past, governmentally, economically and so on. LMU, in fact, already has a Study Abroad presence in China, Japan, South Korea, India and the Philippines. In the future, we will see students [being] much more comfortable and eager to be in Asian countries, and not just through Study Abroad. Many of them will have been to Asia before they enroll. I think we’re going to have more touchpoints with Asia. Study Abroad is a good way to prepare for that, a good way to help students understand Asian and world cultures. Asia is so vast. We enroll many students who not only see Asia as foreign, but also as exotic. If you spend a semester somewhere, the exotic becomes normal, and you begin to understand it. Our world and cultures are demanding that the next generation develops such understanding.

What does LMU need to focus on to be a Jesuit institution that is spoken of in the same terms as Georgetown and Boston College?

That shouldn’t be our goal. We should have renown similar to theirs, but we have to be careful that we don’t seek to accommodate their handprints or footprints. We are our own institution, and we stand on our own legs. We should strengthen ourselves using all institutions and their successes and stories as potential guides of where we might go. But in no way do we want to adopt the template of another institution, no matter how good it is. Georgetown and Boston College are great “siblings,” and they’re Jesuit as well, so we have a lot to learn from them. But we’ve reached a point where we can legitimately stand on our own and strengthen ourselves within the scope of our identity.

Name one challenge that you believe LMU must succeed in meeting during your tenure.

We need to get on the same page with a branding strategy — accepting, understanding and working with a strategy that will help others understand us better. People have an opinion of us. They have an emotional response to us; they have an intellectual response to us. We want to influence and evolve that response. That involves discovering your identity, and not just communicating it but translating it into the minds of the public so effectively that they not only know your identity, but they also broadcast it back to you and others. We succeed if and only if we hear from others, independent of provocation, exactly who we are. It’s really about identity.

What is the greatest challenge in private higher education today?

The challenges remain affordability and image. The two are linked. Sometimes people view the liberal arts as fluff or as something special that only special people like professors do. They don’t recognize that we are helping young minds develop in powerful ways. We help students recognize their gifts in ways that will pay back to society in important, valuable, plentiful ways, including economic.

We’ve recently seen nationwide protests on college campuses plagued by racial discrimination. What does diversity mean to you and what is a president’s responsibility toward it?

If diversity was once about ethnic and racial representation, then it is a much broader topic today. It is partly about the choices we make and how we make them. A first step includes making sure all voices are represented and valued in strategic decision making. As a president, I must help foster a community where diversity, inclusion, respect and dialogue are at the center of everything we do. I am responsible for continuing and expanding our institutional commitment to diversity, not because of the national dialogue, but because it is a core value of our Catholic, Jesuit and Marymount traditions — and greater diversity brings about greater strength. I am proud our students have engaged in the national conversation, and I have asked the entire LMU family to continue the dialogue about how we can do better.

When you need to get away from the stress of the President’s office, where will we find you and what will you be doing there?

At the Wiltern, seeing a concert. I was there last night.