This past May, the Pew Research Center issued a report on America’s shrinking middle class in U.S. cities. One conclusion: Like the rest of the nation, the middle class of the broad Los Angeles area (L.A.–Long Beach–Anaheim) does not constitute a majority of the population. Writer Scott Timberg spoke with three analysts about an economic and population trend that’s been developing for decades.

When Jennifer Pate was a girl growing up in the East Bay town of Concord, California, she didn’t realize she was doing serious economic research. But the family games of monopoly she played whether sitting at home or vacationing in her folks’ mobile home were actually a good primer on the nature of capitalism and the world she would move into as an adult.

“If you think about it, it’s just like a game of Monopoly,” she says of the market economy in the United States. “Who’s holding property? And how do you get ahead if you’re not?” The similarities hit her squarely years later, when she was an undergraduate at the University of California, Davis. “I realized it was about accumulating monopoly — once you control the board, no one else has a chance. [Our economy] is a similar sort of system. Once we tilt toward inequality, we keep going.”

Pate, who has taught economics in the Bellarmine College of Liberal Arts since 2005, is hardly the only person worried about income inequality, the erosion of the middle class or the dominance of what has come to be called “the 1 percent.” But she has done important research on these topics, working her findings into the textbook she co-wrote with Ryan C. Amacher, “Principles of Microeconomics.” Despite both parents in a family typically working full time and for longer hours than their parents worked, goals such as homeownership, good schools, college education and financial stability are getting harder to achieve and sustain. Real wages, Pate notes, have been flat for 40 years.

Pate is one of several on the school’s faculty who share these concerns. “I think you’ll find if you study Canada that they’ve not been through what we have,” says James Devine, professor of economics. “They’ve been less susceptible to the neoliberal idea that markets are always the solution. And they have not allowed financiers to take over the way we have. Those things work together.”

In 2014, figures from the Luxembourg Income Study Database showed that our northern neighbor — which avoided many of the ravages of the Great Recession that wiped out many U.S. homeowners — had finally passed the U.S. in having the world’s richest middle class. 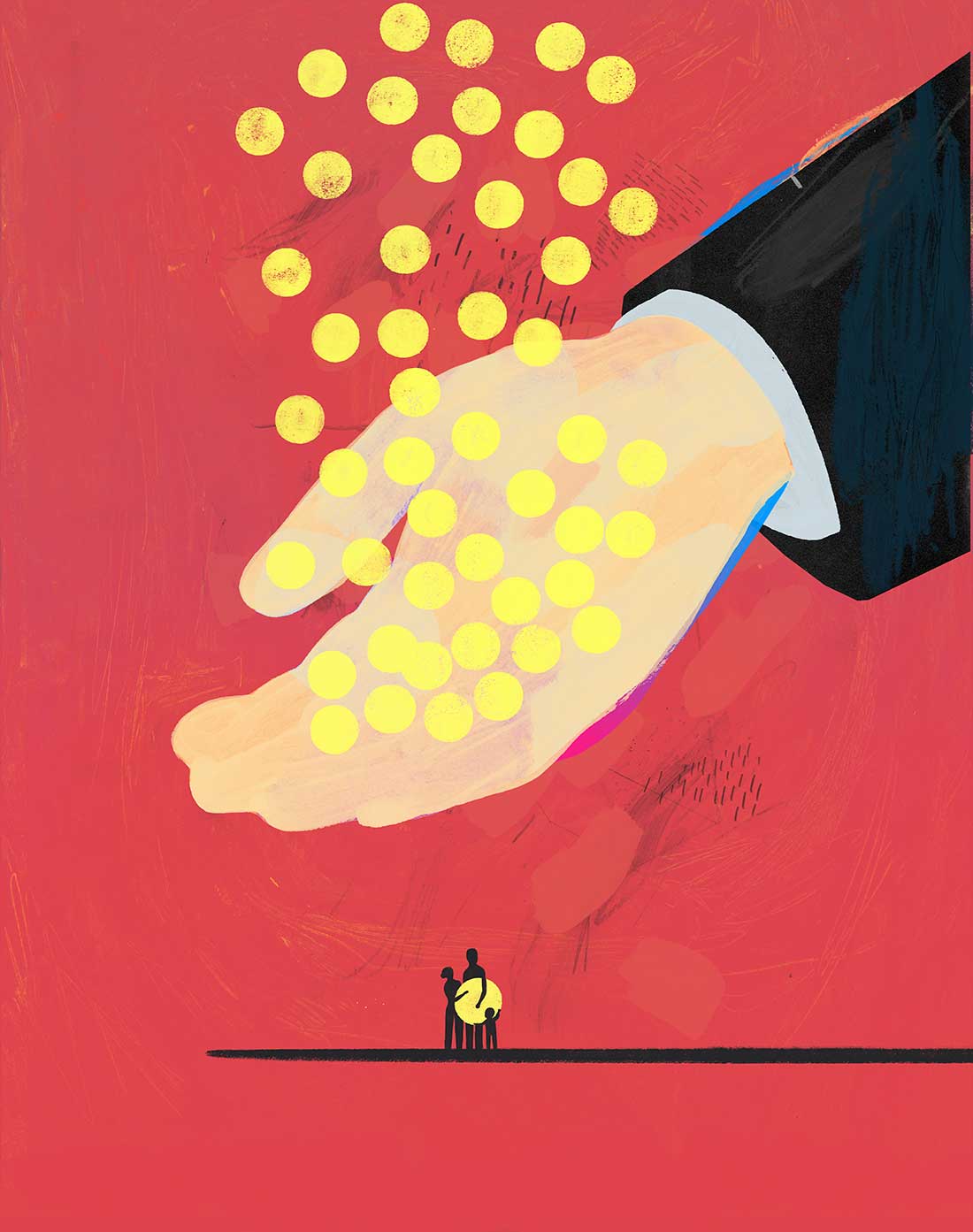 Pate sometimes visits international gatherings, where she’s greeted by a combination of teasing and incredulity from her foreign colleagues. “Our income equality, if you look at developed countries, puts us at about 90th on the list. When I go to international conferences, people ask, ‘Why don’t Americans revolt?’ We’re self-governing: Why don’t the bottom 80 percent come up with a policy that serves them?”

There is no consensus on what “middle class” really means, but it is a term woven through with implications and connotations, especially in the United States. In fact, the phrase is so rich a part of American myth that people both wealthier and poorer than any possible definition claim to be part of it.

Pate sees the middle class as hard to define, but says it’s probably best identified as families close to the median household income, which the Census Bureau defined as around $56,000 for 2015. In many places — like Westside Los Angeles, for instance — that sum does not go very far at all. Another way of looking at it, she says, is through goods: “The house, two cars in the driveway — it’s the American dream.”

The well-respected Pew Research Center describes “middle-income households” as those earning between $42,000 and $125,000. But there are all kinds of intangibles typically associated with middle-class identity, like education (did you go to college or have the ability to send your child to one?), security (can your finances survive a medical emergency?), predictability (do you know how and when your next paycheck will arrive?), and cultural or culinary tastes and aspirations.

Devine’s definition is simpler: “A family that owns one house, and only one, with significant equity. If you own something else that’s not just a cabin in the woods, you’re rich.”

A typical element of middle-class culture is thinking you did it all yourself, that you or your family is somehow “self-made,” unlike those lazy poor people or those spoiled, extractive rich folks. But the American middle class — at least, the large, stable middle class that thrived from the 1940s to the ’70s — was built as surely as its socially engineered, government-supported Scandinavian equivalent.

In the U.S., connections to middle-class identity run deep. “It’s been right there from the beginning, since the American Revolution took place near the start of the rising bourgeoisie in Europe,” says Sean Dempsey, S.J., professor of history, who specializes in religious and urban history. “But when we talk about the middle class in the United States, we’re mostly talking about a class that was built in the ’30s through New Deal policies, and the relationship among government, large corporations and labor unions — with industrial capitalism underneath.”

Programs like Social Security, the mortgage-interest deduction and the massive postwar expansion of public universities, like the University of California system, helped move working people into a robust middle tier. Things changed, most historians concur, in the ’70s and ’80s.

“So the story of the rise and decline of the middle class,” Dempsey says, “is very much about a coming together of elements that would later come apart. Maybe the most important one of all is the flight of corporations and corporate capital,” as companies and jobs left Northern cities for less dense areas, the nonunion South, overseas and phony incorporations like the Cayman Islands.

The process was amplified by the Great Recession, which led to the loss of millions of jobs and a reduction in homeownership, especially in California. “It’s been almost a decade since the recession, and we’re just getting to the point where median wages are where they were before,” says Pate. “Meanwhile, our top bracket continues to go up. Even in bad times, the money tends to flow upward.” 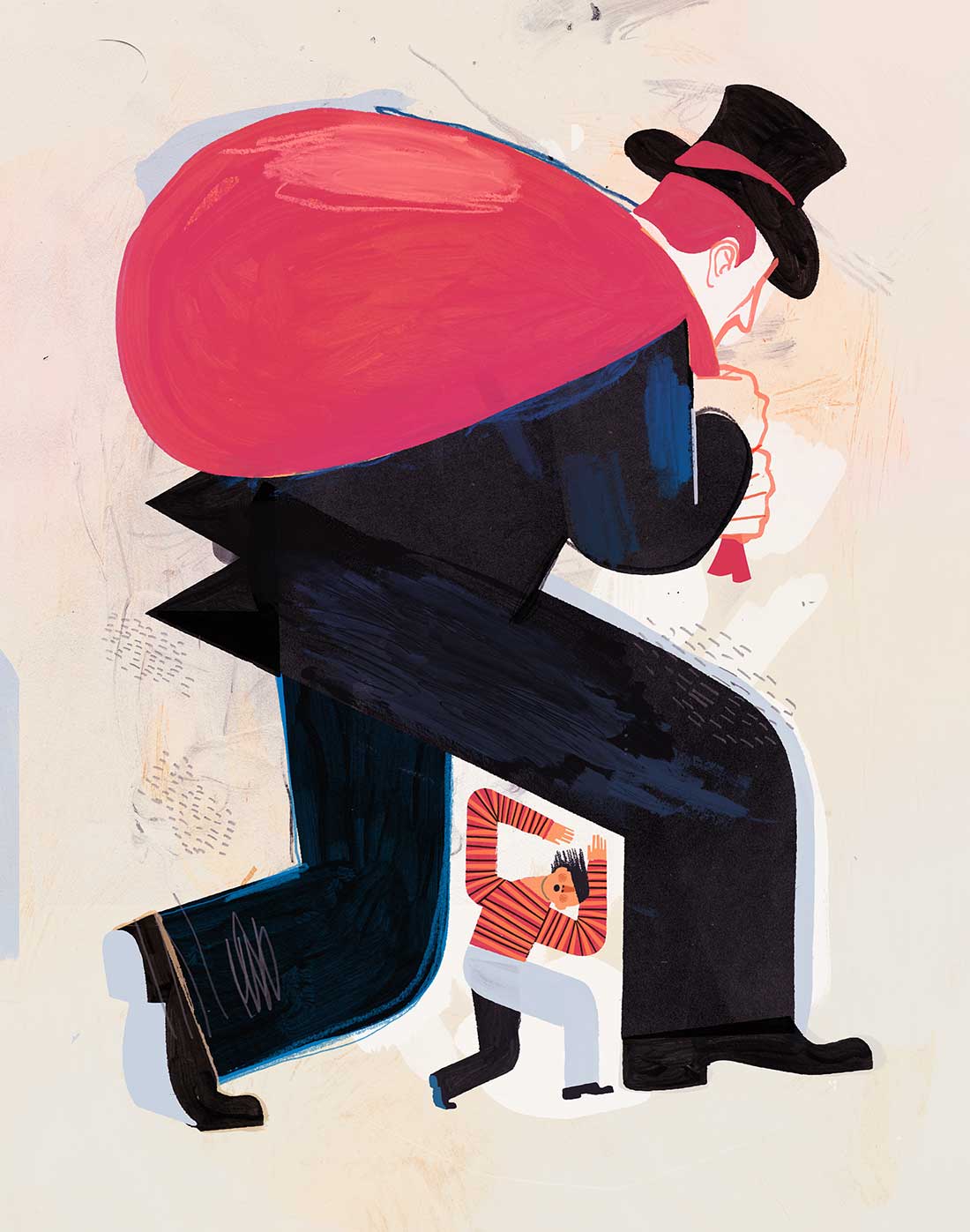 The digital economy that arose after industrial jobs began to disappear has worsened the situation both for working people and educated professionals. “A lot of these new industries are less labor intensive,” Dempsey says. “So instead of 100 people on an assembly line, you have two people with Ph.D.’s working on a project.” Further, automation has grown enormously and replaced human workers since the middle class mid-century heyday.

Despite these trends and forces, Devine and Dempsey agree that the decimation was not inevitable. “My argument is that there was still plenty that could have been done to bolster the middle class,” says Dempsey, who describes one subclass as “the Precariat” — as in precarious — a destabilized group that makes good money sometimes but can rarely count on it. “It didn’t have to turn out this way.”

Very recently, the news has been a bit better: The nation has mostly recovered from the recession, poverty rates are down, and September’s census data showed a rare 5.2 percent rise in median income. “The middle class gets a big raise … finally!” shouted a headline on CNNMoney. But Pate remains skeptical.

“That’s like having a severe drought and then having a day of rain,” she says. “We’d need to have that continue for a very long time for it to have a real effect on the middle class.”

CRITIQUE FROM LEFT TO RIGHT

While the critique of inequity and the erosion of the middle class typically comes from the liberal left, it’s become an across-the-board concern over the past few years: Conservative politicians including Mitt Romney and Paul Ryan have brought it up, interpreting the crisis differently than progressives do. Pro-market types and The Economist magazine point out that the expansion of capitalism has lifted millions of people in the former Third World out of poverty.

But it is the worship of the supposed free market that has gotten us into trouble, at least in the U.S., Devine says. “A lot of it,” he says, “has to do with our tradition of every man (or woman) for yourself. ‘You’re on your own!’ ” It makes American voters and politicians less likely to adopt models from other developed countries, such as single-payer health care, public infrastructure investment and state support for higher education.

“This is not a problem you can say you do or don’t believe in,” Pate says. “This is data collected by the IRS. We can all agree on the numbers, but then we ask what we can do about it. That’s when it gets complicated.”

Pate would like to see much of what Devine recommends. But she also enjoys discussing the problem with a wide range of students and says that the Jesuit tradition and Pope Francis both recoil at extreme inequality. “Generally when I bring it up, students — regardless of political ideology — are appalled,” she says. “They may be fiscally conservative, but we’re still a social justice-oriented school. Once you agree that it’s something we need to fix, there’s a lot of middle ground.”

Scott Timberg is a culture writer for the website Salon and the author of “Culture Crash: The Killing of the Creative Class,” which was named a winner in the nonfiction category in the Eighth Annual National Arts & Entertainment Journalism Awards. Timberg worked as a Los Angeles Times staff writer for six years, and his writing has appeared in The New York Times and Los Angeles magazine. His ArtsJournal blog is called CultureCrash. Follow him on Twitter @TheMisreadCity.