A child asks me the other day if I have ever been to Los Angeles, and I answer no and yes, which is to say that I have not, as yet, set foot in that ancient settlement, but I bet very few people have read as much about it as I have — not just Raymond Chandler and James Ellroy and Nathanael West, but accounts of the years when it was Spanish and Mexican, and the years before that when it was variously Hokan and Tongva and Gabrielino and Fernandeño; we forget, steadily, arrogantly, dismissively, lazily, that what is today the city and county was populated three and five and ten and twenty thousand years ago, not only by men and women and children but by uncountable millions of animals, whose experience of Los Angeles can only be imagined; what would a dire wolf’s pains and pleasures have been like, wandering among the trees and bears, the bogs and inlets, the tar pits where a girl and her dog were interred ten thousand years ago?

Cities exist backward and forward in time, of course, and it is refreshing to occasionally ponder them as verbs, rather than as sprawling seething nouns; to think of New York as a lovely little island on which to haul up your canoe and slurp down oysters, before continuing south to evade the grim winter; to contemplate Chicago without a single house or hotel, when it was a river-mouth famous for the wild garlic that grew there in profusion; to imagine Miami as a dense steaming green thicket, and Portland as a good place to spear Tyee salmon, and Atlanta as a citadel of the Muscogee people, who were famous as seers, and prophesized the coming of comets and earthquakes, and their own demise at the hands of invaders from across the sea. 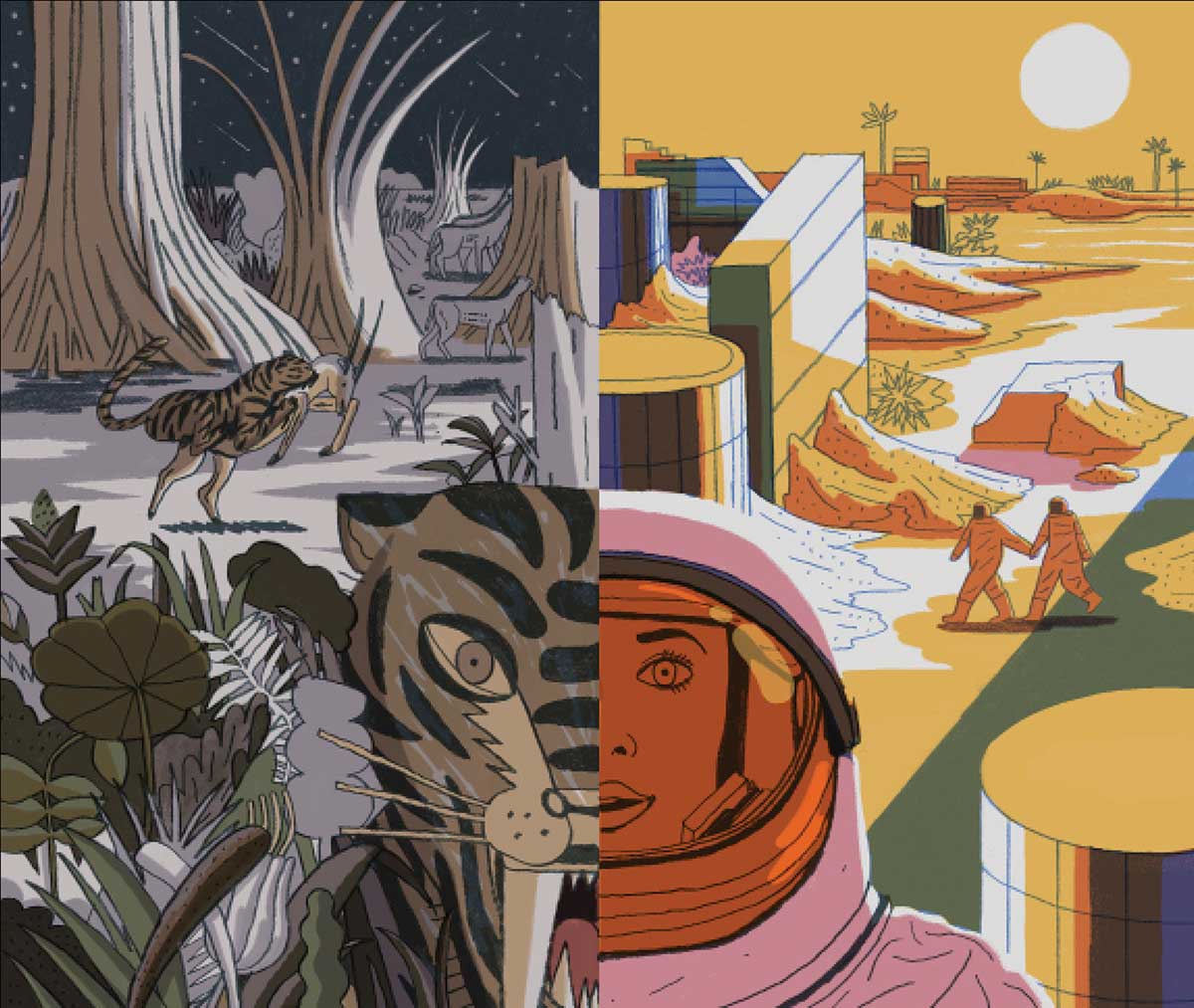 Similarly it can be riveting to dream them forward — to imagine Seattle merging eventually with Vancouver and Victoria, to become the vast City of the rising Salish Sea; and New Orleans eventually to be a floating city, perched on a tremendous plastic raft in the Gulf of Mexico, so that it can never again be inundated, but instead append itself to Alabama or Texas or the Yucután, depending on wind and weather; and Toronto and Detroit finally joined as Toroit or Detronto, capital of the Lake Country, to which millions have emigrated in search of clean water and cool weather.

And Los Angeles? Not long ago, by the measure of the wild world, it was cool and misty, ferns and fronds, sloths and scallops, an open jungle; then came thousands of years of human beings, who shaped the land and waters to their own purposes, for good and ill; and the wild world changed, partly by the machines of men and partly by its own mysterious calendar; and now the default imaginative image of the future of the city is apocalyptic, despairing, savage, a nightmare in endless Technicolor iterations, with a soundtrack of snarls. But what if the most famous product of the place is applied to the place itself, and imagination finds new ways to live in what the Tongva people long ago called Yaa? Could sea water be recruited in ways that balance rising seas? Could all that collected salt be sculpted into the most astonishing pillars and towers and statues? Could all that flat sharp light be recruited in ways so remarkable that eventually the Santa Ana winds blow away the brooding curtains of poisonous smoke? Could wit and humor and generosity be ever more valuable products, so immensely valuable that drugs and violence go out of business? Could that be? Are you so very sure that it cannot be? How very easy to be cynical and skeptical, to expect the worst of human beings, to assume, with all too clear evidence, that we will be mean and small and greedy and violent and devious; but if ever there was a city in which the residents could appeal aptly to their better angels, to the irrepressible creative urge, to the gift of wild imagination that human beings have perhaps more than any other species, it is, just possibly, perhaps wonderfully, Los Angeles.