Article and Illustration by Van Partible '93

As with television, I often look at my life in terms of seasons. Sometimes my life feels like an endless summer, other times a colorless winter. Regardless, each season is time-limited. Unfortunately, in real life, it’s hard to know beforehand when one season ends or another is beginning. It truly is a journey of faith.

In 1997, after graduating LMU, I sold my senior animation thesis project, called “Mess O’ Blues,” and developed it into the cartoon series “Johnny Bravo” for the Cartoon Network. It was an amazing first season, but I was taken by surprise when the company fired me amid the Warner Brothers takeover of Turner Broadcasting. The show continued on for several more seasons but with a completely different crew from Warner Brothers. I can only compare it to being forced to give up your baby for adoption and watching it go to parents who were making choices you didn’t agree with.

Because of the nature of the business, the next production I worked on only lasted for three years. In 2000, I found myself on the job market again. I was still only seven years into my career, but this time, I let despair take over. After months of pounding the pavement, I was faced with the reality of a nonexistent income and no job prospects on the horizon. Some hard talks ensued with my wife, and I reconciled with the fact that I needed to expand my job search outside of the entertainment industry.

After doing an inventory of my marketable skills, I focused on the fact that I could write and that I was good with people. With that as a starting point, I began applying for jobs at hotels, where I felt my people skills would be best utilized. Plus, I would meet interesting characters from all over the world and write about them. I ended up getting a front desk job at a nearby Marriott.

I was relieved to have a job again, but inside, I felt a deep sense of shame and failure. I wasn’t really prepared to go from earning a six-figure salary to minimum wage. My lowest moment came when my boss brought me into his office and told me, “Guess what? I know you’ve only been here a month, but I’m happy to say that you’ve earned yourself a 25-cent raise!” Then he pulled his arm back like he was working a slot machine and said, “Cha-ching!”

When faced with adversity, I often ask myself, “If I believe I’m exactly where God wants me to be, then what is He trying to teach me from this experience?”

When I was let go from “Johnny Bravo,” I felt like a victim. I was told that it had a lot to do with the fact that I lacked the managerial skills needed to handle a multi-million dollar production. I saw things differently and took the news more personally. Interestingly enough, the orientation program at the Marriott had a course in managerial training. It was there that I discovered the holes in my thinking and learned a multitude of skills that I still use today. The course was a huge confidence builder, because it illuminated the fact that my being fired had more to do with my inexperience than it had to do with my talent.

Six weeks into my hotel stint, I mustered up enough courage to schedule a pitch meeting at the Cartoon Network with the same people who had let me go. It was a pitch for a new show idea, but the meeting was a huge risk because some awkwardness remained between us, and it still felt fresh. The pitch was one of the most difficult that I had ever made, but it was also the most rewarding because something about my presentation in that meeting led them to offer me the job of producing another season of “Johnny Bravo.”

I turned in my two weeks’ notice at the Marriott later the same day.

My current manager once told me that, in order to have a successful career in Hollywood, the No. 1 thing you need is the ability to cope with despair. It’s a tough lesson to learn because being successful means putting yourself out there and risking failure.

But even with the shame that comes with failure, I gained a greater gift of competence and confidence that I could never take for granted. The lessons I learned have worked well for me in the seasons since this story, and I know that they will in the seasons to come. 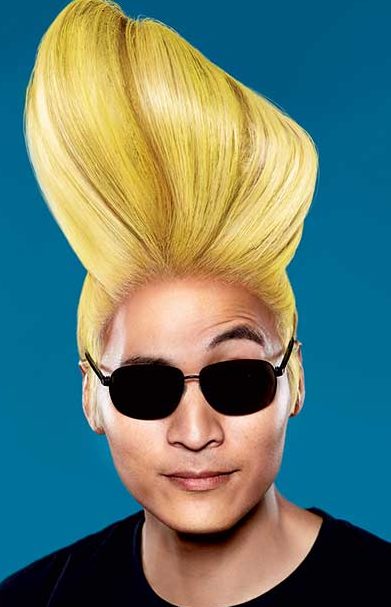 Van Partible has worked at Walt Disney TV Animation, Film Roman, Warner Brothers, NBC and Cartoon Network Asia. Born in Manila, he grew up in Salinas, Calif. At LMU, Partible studied animation as a studio arts major. Partible created “Mess O’ Blues” as a senior animation thesis. After his professor, Dan McLaughlin, showed it to a friend at Hanna-Barbera Cartoons, the project became “Johnny Bravo,” a Cartoon Network mainstay. Partible remembers watching TV cartoons every Saturday morning as a boy in Salinas. Bugs Bunny, he says, was the first animated character to leave an impact on him. Partible teaches character design in the School of Film and Television.
See Full Issue