The history of Los Angeles murals takes a path through most Los Angeles neighborhoods. Some observers say the story begins with the native Gabrieleno-Tongva peoples, who painted pictures on nearby rocks and cave walls.

In the 20th century, Olvera Street briefly became home to a landmark mural: David Alfaro Siqueiros’ “América Tropical,” a 1932 work that provocatively depicted a crucified Mexican worker. It was soon painted over.

Alejandro Poli Jr. ’93, whose artist name is Man One, has painted some of L.A.’s murals, including “The Downtown Artist at Large” and “Regenerations.” Murals have shaped his life and art. As a boy, he walked with his mother to markets in Boyle Heights and was awestruck by the murals of the legendary East Los Streetscapers. As a teen, Poli painted graffiti. But it was the art, not claiming a turf, that attracted him. “My goal wasn’t to be the biggest vandal in L.A.; my goal was to be the best artist in L.A.,” he says.

Poli studied fine arts at LMU. His work, now acclaimed, draws heavily on a graffiti style. He has received sponsorships and commissions from corporations and had his own gallery called Crewest. His murals can be seen in Panama, Mexico and Northern Ireland as well as Los Angeles. For Poli, the work was born in his childhood. “I dreamed of doing large-scale art on building walls,” he says. 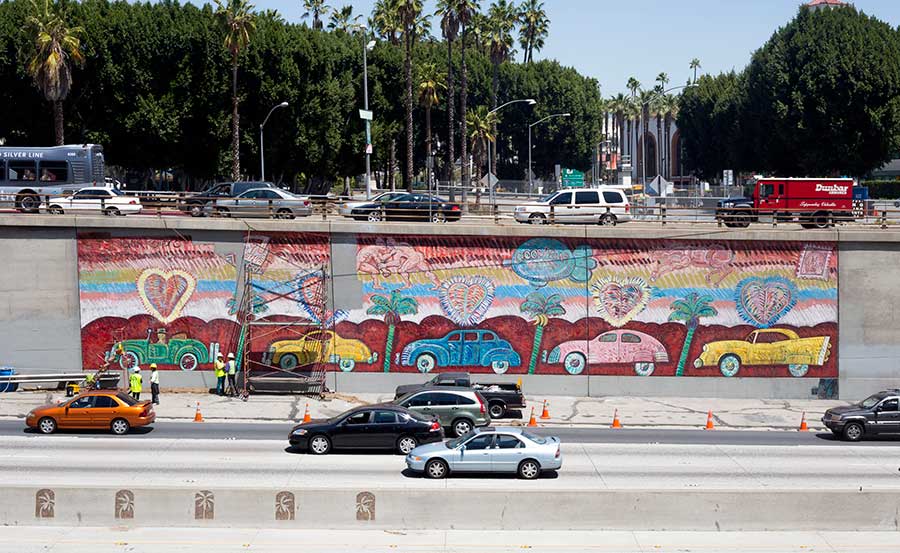 Public space is the stage for urban life, where different cultures mash together to form the identity of a city.

As an urban designer and landscape architect, I spend my waking hours thinking, dreaming and designing public space. Los Angeles was not built with a grand city plan or main civic space, but rather grew primarily through private real estate interests, making public space second to profit. My passion for L.A.’s murals comes from their ability to broaden the range of people creating the city beyond politicians, developers and designers. Murals allow anyone with vision and a can of paint to invent new public spaces.

The murals I find most interesting are often in the hardest to reach, least inhabitable parts of the city: freeways, tunnels, bridges, and overpasses. By working with infrastructure, muralists do more than reclaim public spaces, they make new places. Many freeway murals were commissioned for the 1984 Olympics, such as “L.A. Freeway Kids” by Glenna Boltuch Avila and “Going to the Olympics” by Frank Romero. These murals are not only artistic but urban acts that assert that all space can be made beautiful.

Murals challenge the relationship between the artist and the viewer. In a traditional gallery, art becomes an object of consumption. Murals offer an interactive and collaborative relationship. When a mural is sited on a freeway wall, travelers become participants in the piece as they sit in traffic during a morning commute. By dissolving the barrier between artist and viewer, murals become a means for community to flourish.

Murals do more than change the city’s physical appearance. They make it possible to envision and create alternative ways of using public space, making Los Angeles more vibrant and interesting. Many trends shaping the design of new public spaces reflect an interest in drawing people out of their homes to engage with the community. I see a direct connection between murals, gourmet food trucks and an ever-growing network of farmers’ markets. L.A.’s streets are becoming a much more public place. This reclaiming of the public realm owes much to the past and present pioneering muralists of our city.

Christopher Torres ’09 is a landscape and urban designer at Rios Clementi Hale Studios in Los Angeles. He has studied murals in Los Angeles, New York and Paris. 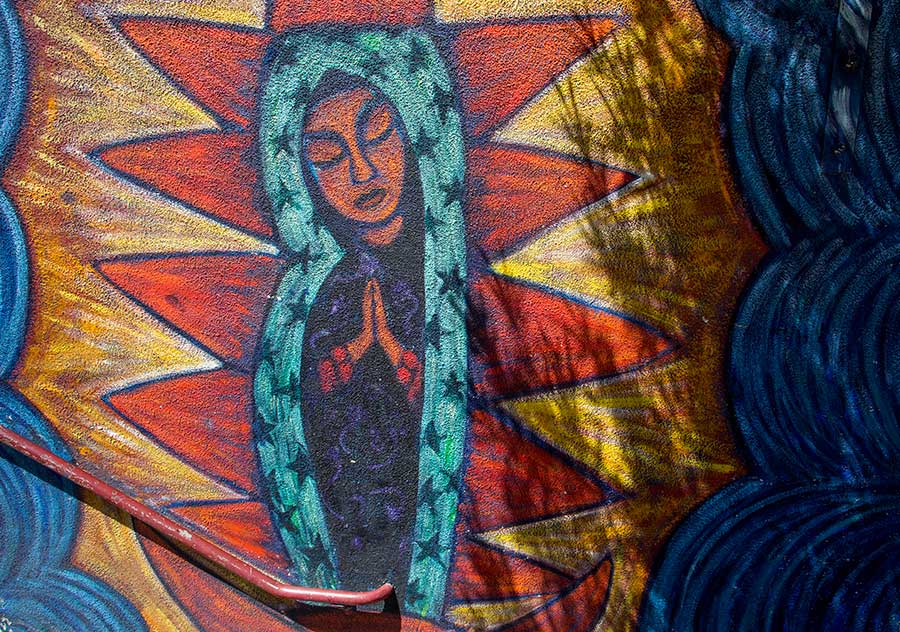 You can’t really see this mural from the street, so you stand there … peeking … and then someone says, “Entra, bienvenida.”

You acquiesce to the welcome; you so much want to see her. You walk past the red, makeshift stop sign attached to the fence that proclaims “Stop the Raids, Pilipino Workers Center,” and you wonder what these raids are and is there something you could do to help stop them. Then you notice small wooden crosses dotting a patch of grass. The word scrawled on the crosses is “desconocido,” which means “unknown.” These crosses honor soldiers of a different kind — those who fought against the enemy of desperate poverty in far-off lands. You look up knowing you should pray, searching for words, and still she calls you.

So you keep walking, past the hurrying people, the children playing tag. It’s only a few feet, but you feel you have crossed countries. You turn to hear a viejito playing a Spanish guitar. He sits on an old, wooden chair by the door where the homeless men will come tonight to get a meal, a sleeping bag and some well-deserved rest. His song reminds you that life is “flor y canto,” full of flowers and music. He offers you those; they’re yours.

All your senses are awake now as you near her. She waits, silent, on a corner of the old wall, all bright blue and oranges and yellows. You turn your head to the mingling of the sounds of the volunteers making meals for the poor and the comunidad singing a hymn inside the small church. “Of course,” your heart sings, “it is all a banquet, and she is the mother asking for the finest wine from her Son.”

Then you reach her. Dolores Mission’s stunning mural of Our Lady of Guadalupe, by Jose Ramirez, keeps watch over all of this commotion, her eyes closed, head tilted, hands in prayer. She stands where she is loved and where she can remind each of us that we’re loved. To be able to see her, to touch her, you have to get to know her people, her “beloved little ones,” as she called Juan Diego. La Virgen de Guadalupe stands there, at the foot of dilapidated cement steps inside the courtyard of this legendary Jesuit parish.

She and her beloved, just waiting for a visit … from you.

Cecilia González-Andrieu ’80, M.A. ’01, is associate professor of theological studies in the Department of Theological Studies. Her new book is titled “Bridge to Wonder: Art as a Gospel of Beauty.” 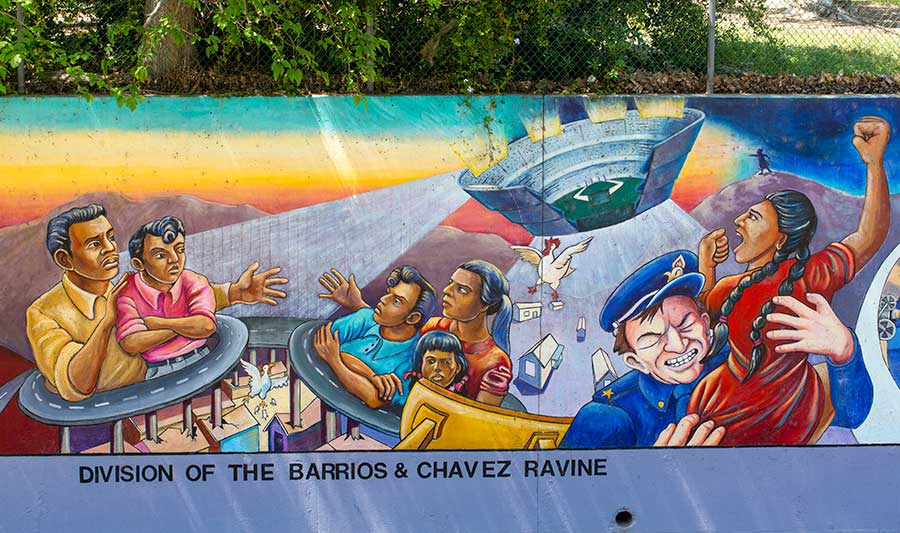 Los Angeles is one of today’s great art centers, with artists, museums and art schools that rival if not surpass those of any other city.

L.A. is also home to more than 1,500 murals, including what may be the world’s longest: the “Great Wall of Los Angeles,” located in the San Fernando Valley’s Tujunga Wash flood control channel. Started in 1974, the Great Wall depicts the history of California from pre-civilization to the mid-20th century, focusing on the contributions of the region’s diverse ethnic communities. Its creator, artist Judy Baca, used a crew of at-risk youth from across Los Angeles to paint the panels that stretch nearly a mile in length.

As an impressionable Valley kid, I distinctly remember spending time poring over the mural’s imagery. The kindergarten I attended was across the street. The mural’s impact on my understanding of history and how history gets recorded was immeasurable.

The section titled “Division of the Barrios and Chavez Ravine” had a profound influence. Growing up, I was, and still am, a diehard Dodgers fan. The Dodgers were my team. Like Dodger Manager Tommy Lasorda, I bled Dodger blue. But the mural’s depiction of the forcible removal of a Chicano family from their home in Chavez Ravine to make way for the building of Dodger Stadium gave me pause: It illustrated an injustice implicating my team and city in a terrible wrong.

Then I studied the wall’s other portrayals of injustice, like the 1943 Zoot Suit riots and the World War II Japanese internment camps. I pored over the representations of triumphs of minority figures, such as Charles Drew, M.D., Harry Hay and Albert Einstein. The mural exposed a history not found in school textbooks and made me sensitive at a young age to the subjectivities of historical narrative.

This is the power of public art, and the best murals, whether by Michelangelo, Diego Rivera or Judy Baca, have the ability to affect social and political change. The Great Wall is just one of a thousand examples of such art hidden in plain sight throughout Los Angeles. All that is required to appreciate and partake in this art is an openness of eyes and mind.

Damon Willick is an associate professor of modern and contemporary art history in the Department of Art History. His current research focuses on Los Angeles’ postwar emergence as a contemporary art center.