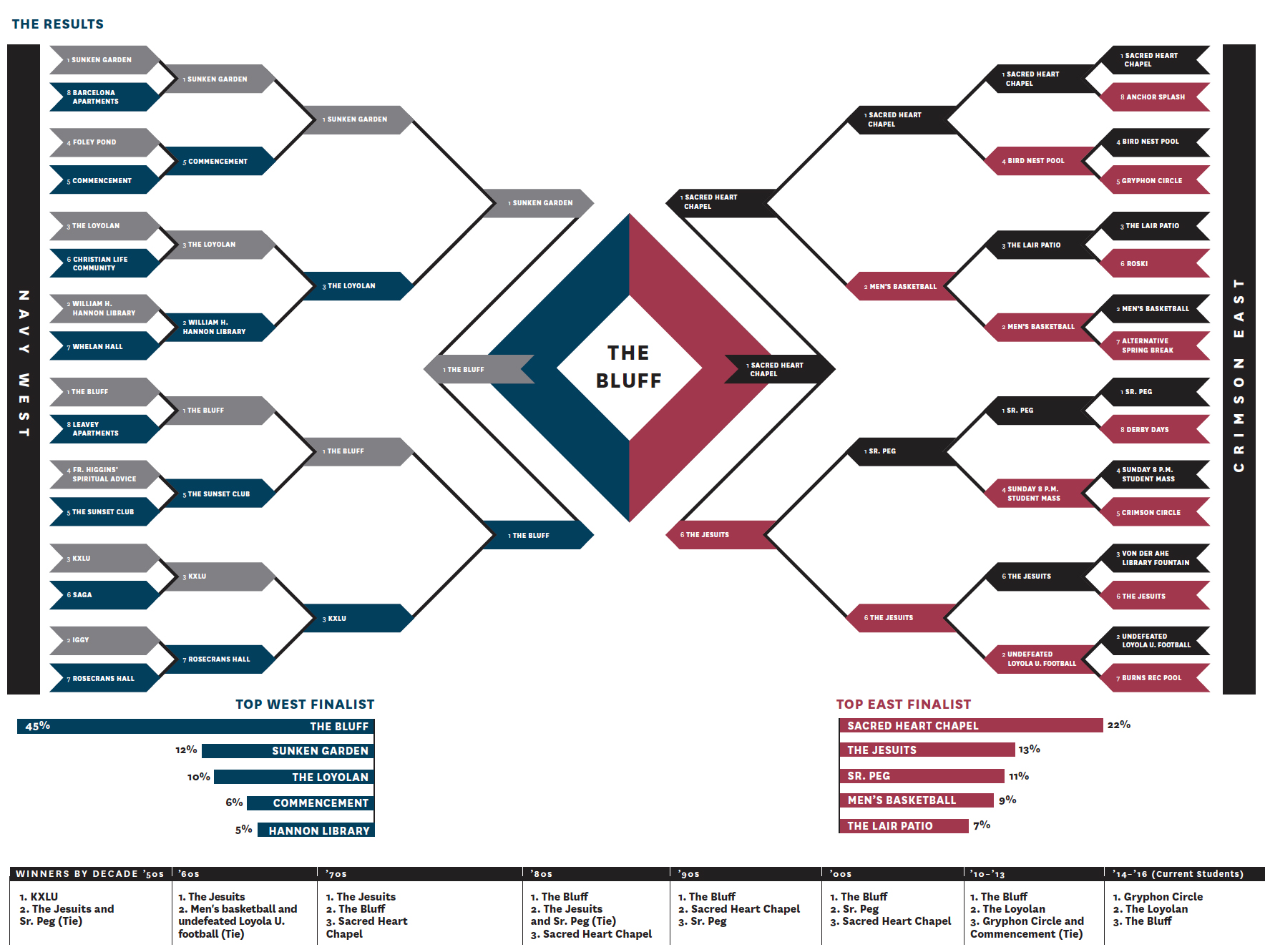 THE BLUFF
The bluff. In 1927, Harry H. Culver, a real estate developer who hoped the Jesuits would move their college there, called it “a panorama of charming views.” Today, it’s even more panoramic. In fact, the bluff is the most popular favorite thing about LMU. Here’s why some of us think so:

Virginia ’14: “On my first visit, I stood on the bluff overlooking Northern L.A., and it felt like home. Even though I was 3,000 miles from my own home, I just knew that this, LMU, was where I was supposed to be.”

Sandra Fuchs ’86: “The bluff. What a great place to sit and think or talk to a good friend.”

Ortizde@hotmail.com: “The bluff was the first thing I saw when I visited the campus and has been the single thing that I can’t get out of my mind. Gorgeous and intimidating at the same time.” Jeremy ’14: “Tough call between the bluff and the chapel, both symbols of God’s glory.”

COMMENTS
I miss the pool mainly because that was where I spent a majority of my time, being a swimmer!
Lauren Mathewson ’07

The brackets eliminated some of my favorites too early: chapel vs. men’s basketball was uncool so early! Midnight pickup basketball in the gym was my favorite thing!
Nathan Staples ’93

The Jesuits who resided in Whelan Hall and the other dorms bring back the best and most hilarious of memories … just ask the Jesuits.
Mario Palladini ’78

I can’t believe a dining hall made it to the finals in my bracket.
Michael Phelan ’05

Spent some hours listening to the Von Der Ahe fountain when I should have been reading.
Gabriela Gualano ’10

Whelan was my first stomping grounds at LMU. I was the King of Whelan in 2002–03, so it holds a special place in my heart.
Will Sisk ’06

Whelan should not be allowed on this list.
Scott Howard ’08

The one item you missed: the people. The best part of LMU: faculty, staff and students!
Sandra Fuchs ’86

The food services guy who makes omelets and talks like Chef from “South Park.”
James Ratner ’01

Tuesday night at the movies with Ben Abbene.
Steve LaGuardia ’74

You pitted Sr. Peg against the Jesuits? Funny!
Laura Flynn ’87

Filling out the bracket brought back a lot of great memories. Thanks!
Barbara (Curran) Rosen ’81

WRITE-INS
We asked for write-ins, and you sent them. The top 4: University Hall (really?), Greek Life, Special Games (Hakuna matata!) and the Lions Den. Also, profs and staff members, off-campus eateries and a Black Flag concert. But what are these: Beatles for Sam, The Magic Bus, Glow Dance, Harry O’s and St. Patrick’s Day Green Lion? If you know, contact us. Maybe they’ll become future stories.