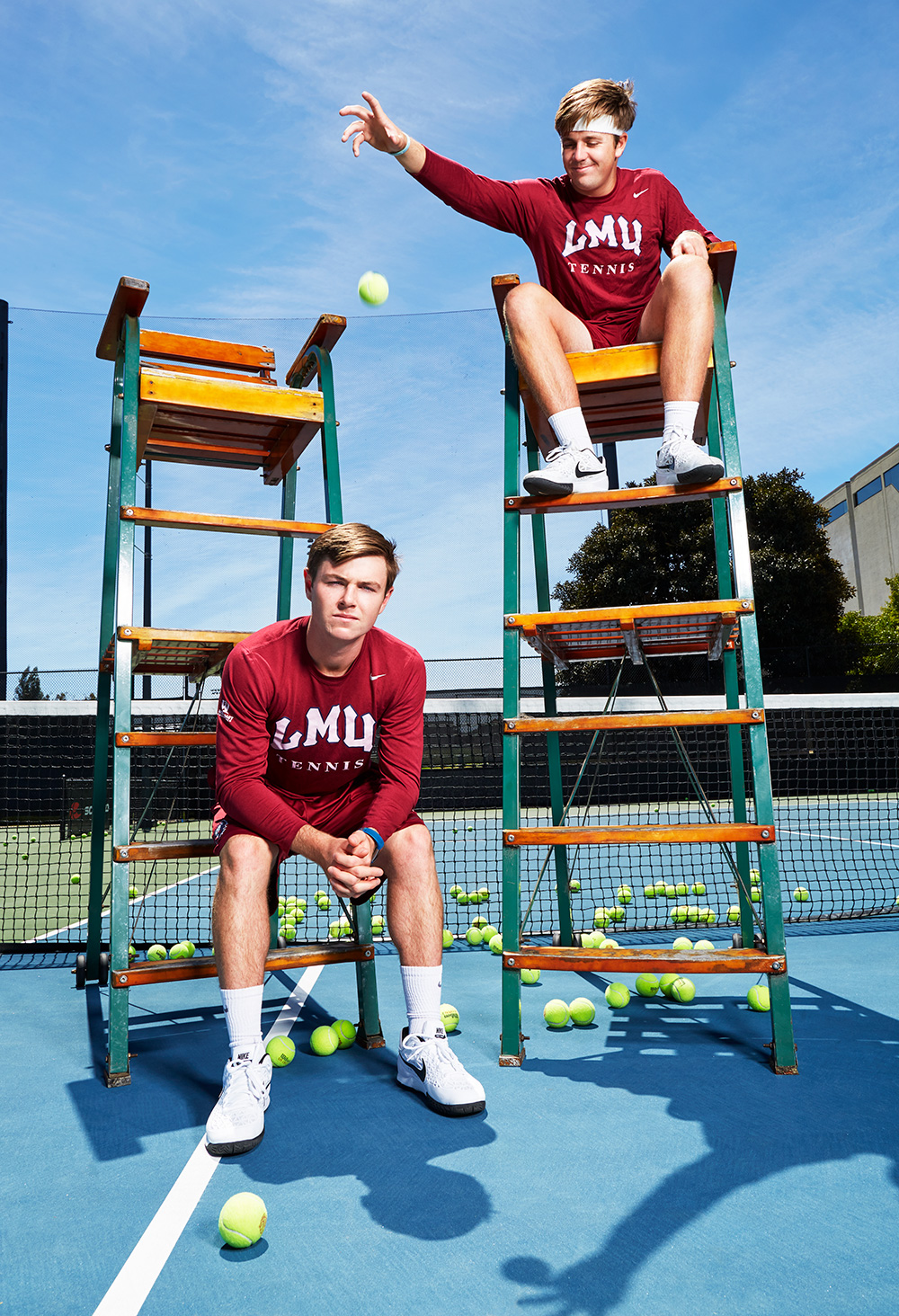 Luke Bohuslav ’17 and Ryan Brown ’20, a senior and a freshman respectively, make up a doubles team for the LMU men’s tennis program. Not only are their skills different but complementary, their personalities — Bohuslav, sedate; Brown, exuberant — are distinct yet mesh. This past season, they posted a record together of 11–9. Bohuslav grew up in Orinda, California, and played multiple sports: baseball, basketball, soccer, golf and swimming. Brown, from Manhattan Beach, California, followed in the steps of his father, Scott Brown ’87, who also played tennis at LMU. We asked Bohoslav and Brown a few questions to get at the intangible glue that binds them together as a team.

What are your strengths on the court?
RYAN: My energy, not so much my strokes. Positive energy for every point. It helps me play my best.
LUKE: My backhand is my best shot, as well as my movement, my athleticism. I get to a lot of balls.

What is your teammate’s strength on the court?
RYAN: His backhand, easily. Out of all the college players I’ve seen, Luke has one of the best one-handed backhands.
LUKE: Definitely energy! Everybody can feel it, it’s contagious.

What makes a doubles team work, in terms of physical talent?
LUKE: It helps if one of you is big!
RYAN: You have to have good lateral movement, especially at the net where you’re moving a lot. It’s good to have someone like Luke, because he can run down any ball. Someone who is fast helps a lot.

Do you guys ever yell at each other on the court?
LUKE: I don’t think I ever have.
RYAN: No, not all. We’re pretty nice to each other.

Are doubles partners always so polite?
RYAN: Usually. It’s hard to be a successful doubles team if you’re getting mad at each other.

If you shared an apartment together, which one of you would do the dishes and clean the bathroom?
RYAN: Luke.
LUKE: I guess me.

Does it work for a doubles team if one guy is loose, never feels pressure and is maybe a little goofy, while the other guy is serious, totally focused and has the classic killer instinct?
LUKE: Yes, definitely.
RYAN: You have to have that balance on the court: someone who is really loose and enjoying himself and someone else who can dial down and come up with a big point. Luke does that. I’m always up and down, with high energy. But Luke is good on the big points.

When a match goes bad on the court, is it ever one person’s fault and not the other’s?
LUKE: No. There are so many points that you play in a doubles match that it’s hard to say there’s one reason. You’re not going to play a doubles set in college without both people making mistakes.

How important is camaraderie to a college tennis team’s success? Can a tennis team succeed without that?
LUKE: All four years that I’ve been here, we’ve had a very close-knit team. I guess I could see a team succeed that isn’t super close. But I think it’s hard in college tennis because we spend so much time together, practicing six days a week and traveling together.

Luke, what does Ryan do off the court that drives you nuts?
LUKE: He snores. He can fall asleep anywhere, but he snores. I can’t stand snoring.
RYAN: Nothing Luke does drives me crazy, but one thing is Luke loves going to eat at the same place, either Subway or Chipotle, or Pinkberry if we want dessert. Sometimes I have to say, “No, I can’t do it. I just can’t get Chipotle again.”
LUKE: I guess I have my routines.

Luke, does Ryan do anything on the court that drives you crazy?
LUKE: There have been a couple times in matches where it’s close and he’s yelling and he spit on me. That bugs me on court. He always apologizes though.

What does the other one have that the two of you cannot win a doubles match without?
LUKE: His energy and positivity. Whenever I miss a shot, he says, “It’s fine. Get the next one.” We couldn’t win without that.
RYAN: Luke is pretty clutch. When we’re in a deuce point, he always makes the return. I can’t win without him being clutch.