In August, students in the M-School’s New World Branding and Advertising class received their assignment: identify a problem within the community and execute a creative solution. Baker, Wudrick, Truong and Velasquez created Seco Jackets — a campaign to keep L.A.’s homeless dry. 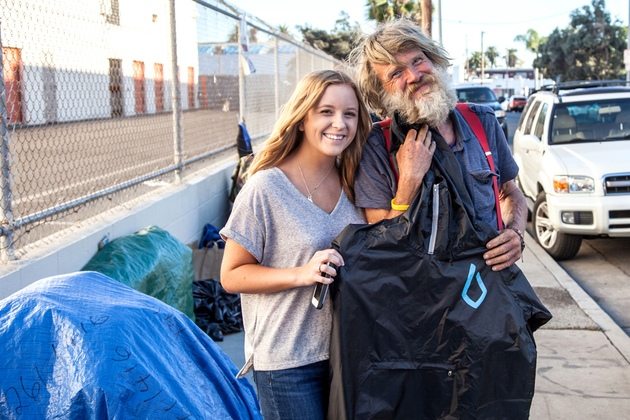 José L. Martinez ’11, former editor of the Los Angeles Loyolan, is a second-year law student at Stanford Law School. A frequent writer for LMU Magazine, his interview with Emma Carrasco ’82, chief marketing officer of NPR, appears here. His essay about being a first-generation university student and, now, law student is here.

There are more than 44,000 homeless people in Los Angeles County, less than one-third of whom live in shelters. In all, 10 percent are veterans, a quarter are dealing with substance abuse, and 3 in ten live with mental illness. More than 2,000 are minors, many of whom live alone on the streets.

The problem has become so acute that L.A. Mayor Eric Garcetti and several City Council members declared a citywide state of emergency in September, promising to devote up to $100 million to the issue. But the students in LMU’s M-School were looking to do something more immediate.

“Since El Niño was approaching, and everyone was freaking out about how much rain we’re going to get this winter in L.A., we wanted to help the homeless stay dry and warm,” said Emily Baker, a senior marketing major.

The M-School is a program in the College of Business Administration that seeks to transform the way students learn about marketing and advertising. You won’t find any textbooks here: Given the constant flux in the field, printed textbooks are obsolete almost as soon as they come off the press. Instead, instructors teach classes alongside industry professionals and focus on four Cs: creativity, collaboration, communication and critical thinking/problem solving.

In August, students in the M-School’s New World Branding and Advertising class received their assignment: identify a problem within the community and execute a creative solution. Baker, Wudrick, Truong and Velasquez created Seco Jackets — a campaign to keep L.A.’s homeless dry.

“Our goal was to break the line between homeless people and non-homeless people, and bring some kind of empathy and compassion to the homeless community in L.A.,” said Wudrick. “We struggled with finding a way to bridge that gap, and the jackets ended up doing just that.”

Once the students came up with their idea, they launched a crowdfunding campaign to make the jackets, which cost $14 apiece. They created a logo and designed the jackets, making sure to keep them stylish and maintain a consistent brand voice, one that was “optimistic” and “hopeful.” Once the jackets were made, the students not only distributed them, but they also exploited social media, using Instagram and Facebook to tell the stories of the people who received the jackets.

“We really wanted to make people feel [that] when they donated, they could see where the donation was going and feel a personal connection with [the recipient],” said Baker. “We wanted it to be about more than just giving a jacket.”

Matt Stefl, co-director of M-School and clinical professor in the College of Business Administration, said despite the complexity of the problem of homelessness the rain jackets were a “really simple idea that cut through a bunch of noise.”

“It really comes down to the insight that we all know what it’s like to be stuck in the rain,” he said. “It tapped into people’s compassionate hearts about what it really means to be homeless.”

Baker, Truong, Velasquez and Wudrick, for their part, have been thrilled to see the response Seco Jackets has gotten so far.

“I thought this was going to be another school project I would just do for a grade,” said Wudrick. “But I learned to engage and care about the homeless community like I never have before.”

“I feel like we’ve made a huge difference, which I didn’t expect,” said Baker. “What’s really eye-opening to me is that anyone can make a difference — we just happened to come together and say, let’s create some rain jackets. And it just blew up.”