Marissa Montes and Emily Robinson are co-directors of Loyola Immigrant Justice Clinic, which they founded in 2012 at Loyola Law School. LIJC provides free consultations and legal services and education twice a week to the immigrant community of Los Angeles at Homeboy Industries and Dolores Mission Catholic Church, as well as real-world experience in immigration law to Loyola Law School students. We spoke to them about recent developments in immigration issues in Los Angeles.

In mid-February, Juan Manuel Montes, a Deferred Action for Childhood Arrivals (DACA) student, was arrested and deported. After ward, President Donald Trump said he is not “after dreamers.” Does the arrest nonetheless raise important issues?
ER: This arrest is a consequence of a rigorous enforcement policy. When you make everyone an enforcement priority as opposed to using a tiered-priority enforcement program that President Obama used, it’s likely that these kinds of mistakes will happen. At this point, Immigration and Customs Enforcement officers and border officials are emboldened to seize and remove anyone who they identify as not a U.S. citizen. While on some level it was comforting to hear that the president is not prioritizing DACA students and recipients, there is no language that’s formal in terms of a policy memorandum or protocol [that would specify who is not a priority]. So until the memos [outlining the enforcement] priorities are revised, I don’t know how comfortable we feel as human rights advocates.

MM: DACA is supposed to grant you protection from deportation, but it’s not absolute. It’s not actual residency, it’s not citizenship. People who have DACA have to be sure that they do not do anything that puts their Deferred Action [status] in jeopardy, like getting arrested for things like driving under the influence.

Is it likely that ICE officials will conduct arrests on college campuses?
MM: As attorneys, we can never guarantee something or never say never. The likelihood of ICE actually coming into a law school campus or an undergraduate institution is pretty slim because politically it’s not a good move. Would this administration do it? I wouldn’t put it past them. But this is why it is so important for students as well as institutions to know their rights when it comes to how far they are obligated to cooperate with the government in releasing information.

The government says it is interested only in arresting undocumented people with criminal records. Is that what you see happening?
MM: I would describe it as a free for all. Everyone who is undocumented or not a U.S. citizen and who has an immigration-barring criminal conviction in the eyes of this administration is fair game for deportation. They have made that clear in executive orders and in how the president has used the term criminal.

How would you describe the primary effect among the communities you work with?
ER: The community is fearful about seeking immigration legal advice even though that could not be more important right now. There is concern about going to the doctor, taking your children to school, going to school yourself and receiving public benefits.

MM: I’ve had many clients tell me, “I don’t want to apply for benefits for my U.S. citizen children because I’m fearful that it puts me at risk.” I assure them that so long as they’re not the ones getting the benefits, legally, they can’t be detained and that their family members who are U.S. citizens or green-card holders are eligible to pursue public services and benefits.

In your view, how has the Catholic Church responded to this issue?
ER: I would like to see it be more active, but I do think it has taken steps to work with community-based advocates to contemplate how it could roll out sanctuary policies. There’s a lot to consider: being singled out by the federal government as a sanctuary institution, cuts to federal funding, for example. It’s intimidating, but the Catholic Church has always been a strong leader in terms of its statements in support of immigrant communities, and this would be a great time to take an even more radical stance in support of humanity and human rights because what’s happening right now is broad-based human rights violations, in my opinion. 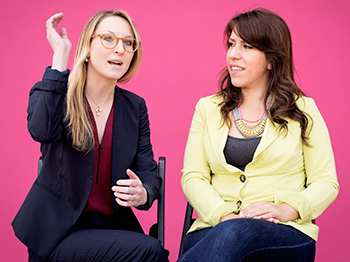