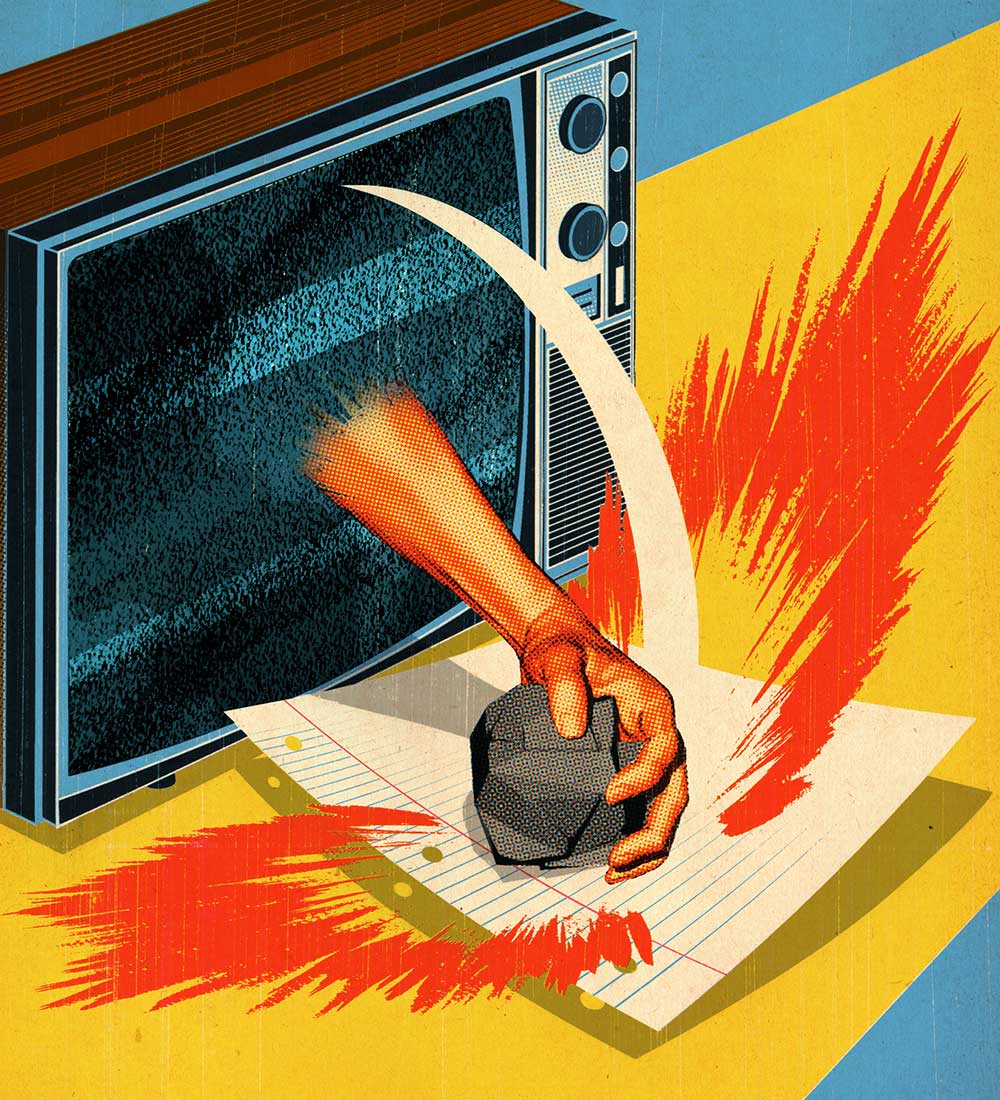 Among matters I ask students to confront when I teach “Media Ethics” are those about violence and its media portrayal. I ask what kind of world they want to live in — a world where we accept violence as normal and natural, where we say “there’s always been violence” and “nothing can be done about it”? Or a world where “violence is unacceptable” and where violence is rare and not glorified? Their answer comes easily: a world of lessened violence. But how we get there is tricky, as is the role of media.

We know violence is a key feature in stories that dominate our main stages of film, television and sports. In life, we hope conflict can be resolved without violence. Yet on these stages, conflict resolution and winning are dominated by violence and aggression. Violence can be a screenwriter’s quick fix: injecting excitement, stimulating the audience and quickly advancing the storyline rather than bogging it down with negotiations of conflict resolution. This tendency has resulted in frequent viewers of storied violence believing that the world is far more dangerous and scary than it really is. They may not be more likely to commit violent crimes, but their beliefs are influenced by the storied world, and they buy more guns and security systems. They more readily justify violence as a legitimate way to resolve conflict.

Interestingly, in film and television, “good guys” often inflict as much violence as “bad guys.” When this occurs, violence in the service of good may be too easily justified. After all, in life, even the baddest guys, including those who inflicted 9/11 terror, may think of themselves as good guys. When this happens, we reconfigure the aphorism “might makes right” to “right makes might right.”

Jeffrey Goldstein, in “Why We Watch: The Attractions of Violent Entertainment,” points out that siding on the right side of justice fuels identification with violence. He also argues that, whether good or bad, we are largely talking about guys. As Goldstein notes, “violent entertainment appeals primarily to males, and it appeals to them in groups.” As a result, when we characterize violence as a social problem, we overlook that it is largely a problem of masculinity. While women commit violence and men inflict violence on women, most violence is man on man. This is mirrored in film and television, where “men of action” dominate our heroic roles. On the playing fields of sports that culturally matter the most, stories of heroic “men of action” who employ strength, aggression and force are both routine and mythic.

Some students struggle at this point. After all, we need heroes who forcefully act and are on “our team.” True enough. But it’s worth reflecting on what it means to be a “real man” in media and sport narratives — especially when we are experiencing a “crisis of masculinity” in which boys increasingly struggle in or don’t complete their education, compete poorly in the job marketplace, and populate the criminal justice system. I have called our celebration of a very limited vision of masculinity “vestigial hypermasculinity,” because it features physicality, aggression and violence, things that may work in an action-adventure movie or on a playing field but don’t play out as well in everyday life. The vestigial hypermasculinity that men see celebrated in their media and sports mirrors may be flattering, but it may not be serving them well. We can do better.