If one imagines a five-point scale to rank the most interesting creature found in nature, hummingbirds might score a straight 5.0. Their color, speed, maneuverability, sound — the thrum of small wings beating faster than the human eye can distinguish — and metabolism are all utterly fascinating characteristics. Student researchers share the same curiosity, and they’re in the middle of a study of the metabolism of female nesting hummingbirds on campus.—The Editor.

Near the end of April 2016, halfway between the spring equinox and summer solstice, LMU students began pulling successive late nights on their laptops as they ramped up for final exams. But these budding scholars weren’t the only campus residents preparing to launch into a brighter future. The student body adrenaline spike happened to coincide with a seasonal baby boom among the smallest birds on the planet: Thousands of shining young hummingbirds were fledging from their nests across Southern California.

Since Los Angeles is home to more hummingbirds than any city in the U.S., the sweeping LMU campus provides an ideal laboratory to monitor nesting females during a breeding season that can extend from December through June.

In fall 2016, a group of 10 students working with LMU’s Center for Urban Resilience (CURes), led by Erich Eberts ’16, a CURes 2016–17 research fellow, began developing plans for a research project that would examine the nighttime metabolic state of nesting female hummingbirds. To be specific, they wanted to understand whether those birds go into torpor at night. Torpor is a hibernation-like state that hummingbirds enter when they must conserve energy.

“There have been five or six papers that have answered similar questions,” Eberts says, “but they did so while studying small numbers of nests, and most of those papers were published prior to 1985.” A goal of the CURes study, he says, is to collect a more robust data set that would allow the researchers to paint a better picture of nighttime energy use by nesting females.

Hummingbirds maintain a warm-blooded temperature and can execute unique aerial feats like hovering and making 360-degree turns in midair. Their metabolism is the highest of any birds in the world. In flight, smaller species spin their wings more than 100 times per second. During courtship displays, males have been filmed traveling a mind-blowing 385 body lengths per second (the equivalent of a human dropping 800 yards per second). Hummingbirds’ heart rate can equal 1,200 beats per minute during peak activity but may be slowed to less than 50 beats when cold weather, a shortage of food or injury forces them into torpor. To get through temperate nights in Southern California, which has a relatively warm ambient temperature year-round, hummingbirds load up on fruit flies, nectar from flowers and sugar water put out by adoring humans. A night’s rest for a hummingbird can last from nine to 12 hours. 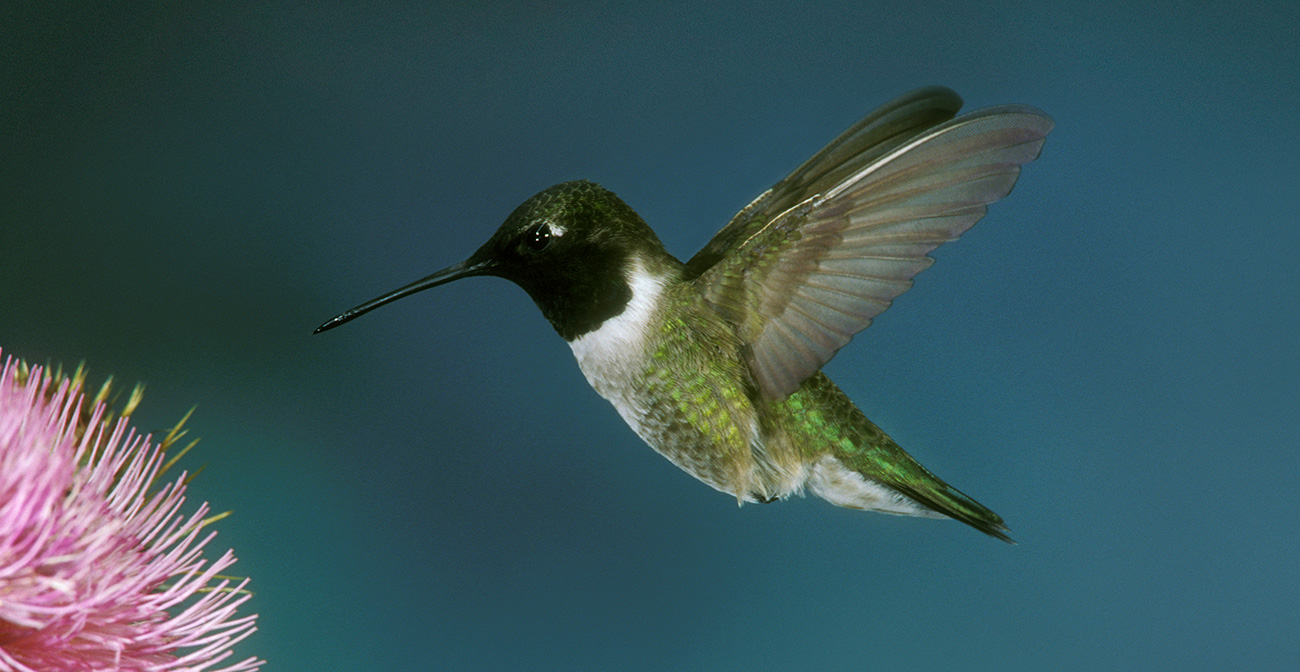 Working with Peter Auger, CURes senior research scientist and operations manager — and a wildlife field biologist himself — Eberts had been studying hummingbird visitation rates and their interactions at artificial feeders as an undergraduate in the Frank R. Seaver College of Science and Engineering. But he and other students had noticed that hummingbirds also were nesting on the LMU campus, and they realized they could film and observe hummingbirds’ nesting activities.

In August 2016, Eberts attended the North American Ornithological Conference in Washington, D.C. Some eight months earlier, he had traveled to Ecuador for eight weeks to join a team studying torpor and energy expenditure among hummingbirds. The D.C. gathering, the theme of which was “Bringing Science and Conservation Together,” drew about 2,000 ornithological professionals, amateurs and students, and Eberts met with several colleagues who were researching torpor through thermal imaging. The idea for research that looked at torpor in nesting females at LMU was born.

When hummingbirds go into torpor to conserve energy, their temperature drops dramatically, as much as from a daytime temperature of 105 F to as low as 40 F. Coming out of torpor can take about 20 minutes. A nesting female experiencing torpor, often considered a temperature decrease of more than 10 degrees, would put her chicks at risk. “We hypothesized that we would not see torpor,” says Eberts, who continues to work on the LMU project while a graduate student at the University of Toronto Scarborough.

During fall 2016, the CURes team began planning their project, aiming to launch in the following spring nesting season. The most common species nesting in Los Angeles are Allen’s, Anna’s and black-chinned hummingbirds. Female hummingbirds construct their nests — which are approximately the size of a golf ball — with spider silk, which provides unrivaled elasticity to accommodate fast-maturing chicks while keeping them tightly contained and insulated. Nesting mothers also rely on a creative mix of organic and synthetic material that includes grass, twigs, moss, bark, seed tassels, pet and human hair, downy feathers from other birds, and laundry lint from dryer vents. It’s an elaborate conglomeration of materials that results in camouflaged structures that protect young hummingbirds from predators until they are strong enough to fly.

The LMU campus, as it turns out, is a hospitable environment for hummingbird nests: Frequent watering of the grounds and many trees and shrubs, especially near buildings, provide protection from wind and rain. The team had identified 26 nests — solely with Allen’s hummingbirds — found near University Hall, Sacred Heart Chapel, Leavey residence halls, Doolan Hall and elsewhere. They organized a crowdsourcing campaign to raise $5,000 to purchase lightweight FLIR Vue Pro thermal-imaging cameras, which can be mounted on small branches, and FLIR lent the team another.

In January 2017, the CURes students began their observations. “What we hoped to be able to study in a nest was the mother hummingbird during the full range of activity,” says junior Melissa Morado, a biology major and lead student researcher, “from the laying of eggs to the moment the chicks fledged”— and begin learning how to survive on their own.

The team had 10 Yi Home cameras that gave the researchers the ability to easily monitor activity in the nests. Those images were streamed by Wi-Fi to a receiver in a lab in the Research Annex, near North Hall. Observing the nesting process from as early as possible was important, because that allowed students to evaluate which nests would likely offer the most promising results.

After selecting a nest to study, the researchers mounted around it a FLIR thermal-imaging camera, a Yi Home camera for continuous observation and a temperature data-logger on a pole. Thermal-imaging cameras were placed in such a way as to be able to focus the camera on the eye of the mother bird, the ideal data point for temperature measurement. The data-logger allowed the researchers to measure the ambient temperature at the nest. “The degree that the mother’s temperature decreases is determined by the ambient temperature,” Morado says.

Between the first week of January and the final week of April, the research team shifted cameras around the LMU campus from nest to nest, according to which nests were more likely to maximize the quality of the data they intended to collect. A full camera setup might remain at a location anywhere from four to seven days.

By the end of the spring semester, the team had collected data in the form of time-lapse thermal images from a total of 11 nests, taken two at a time on any given night, producing reams of temperature information about changing energy levels in mother hummingbirds and ambient temperatures.

During the fall months of 2017, the team has been analyzing the data. So far, they’ve uncovered evidence that nesting females undergo a 5 to 7 degree drop in body temperature at night, which Eberts describes as “shallow hypothermia.” Those results would confirm earlier studies, but the CURes project does so with a wealth of information, and the study will continue through the 2017–18 academic year. In addition to ongoing analysis of the past spring’s data, the team is making plans to gather still more information during the coming nesting season in 2018.

“Now we know exactly what we need to best gather information,” Morado says, “and what accommodation is better for us when we put our cameras out.”

Another season of studying LMU’s nests will dramatically increase the amount of data, buttressing the team’s conclusions about nesting female hummingbirds. A study such as this, Morado adds, also could become a very useful examination of changing hummingbird behavior in an urban environment, leading perhaps to comparisons over time from one spring to another.

Still, underlying the useful discoveries researchers make about hummingbirds is the simple fact that the birds are almost uniquely interesting and intriguing. Acrobatically gifted and visually mesmerizing, they fascinate researchers and non-scientists alike. Morado, for one, sees the creatures from both points of view. Hummingbird eggs are shockingly small, she says, and when chicks are born they look little like what they will become.

Then, for a moment, Morado sets aside her scientist’s perspective. “It’s hard to imagine,” she says, “that they’re going to develop into beautiful birds.”

Terry Masear is the author of “Fastest Things on Wings: Rescuing Hummingbirds in Hollywood,” a nonfiction account of her work as a hummingbird rehabilitator who rescues hummingbirds in the Los Angeles area. Masear, who now lives in Portland, Oregon, is part of Los Angeles Hummingbird Rescue, which rescues more than 1,000 orphaned and injured hummingbirds in Southern California each year. Joseph Wakelee-Lynch is editor of LMU Magazine.