“It’s lovely to live on a raft. We had the sky up there, all speckled with stars, and we used to lay on our backs and look up at them, and discuss about whether they was made, or only just happened. Jim he allowed they was made, but I allowed they happened; I judged it would have took too long to make so many.”
―Mark Twain, “The Adventures of Huckleberry Finn”

Hugh Fox cut an unforgettable figure that spring of 1959, when he first suggested to his freshman English students the idea of re-enacting Huckleberry Finn’s storied rafting trip down the muddy Mississippi.

Looking out on a roomful of Loyola boys from behind horn-rimmed glasses, the young Dr. Fox had already etched himself into their memories as equally exuberant about American literature and ambivalent about fashion.

“He was animated and enthusiastic,” remembers Stan Zalesny ’64. “His tie was always askew, and his shirttail was always coming out.”

Fox would go on to earn great respect both as a literary scholar and poet. But to six adventurous Loyola students, he would forever be the professor who inspired an adventure worthy of Twain himself.

“He was very much into the Huck Finn story,” Zalesny recalls. “One day, he was pacing back and forth in class, talking about Huck’s rafting trip down the Mississippi. And he said, ‘I’ve never heard of anybody taking a trip like that. Wouldn’t it be wonderful if somebody did? How many of you would be interested?’ ”

Nearly everyone raised his hand, but in the end, the crowd dwindled to six stalwart sailors who began meeting at Fox’s home three days a week to plan the great escapade they dubbed “Operation Huck Finn.”

“We’d drink sangria and sit there with our maps all spread out, make lists of what we needed, where to get it, how much it would cost, and where we were going to go,” Zalesny says. 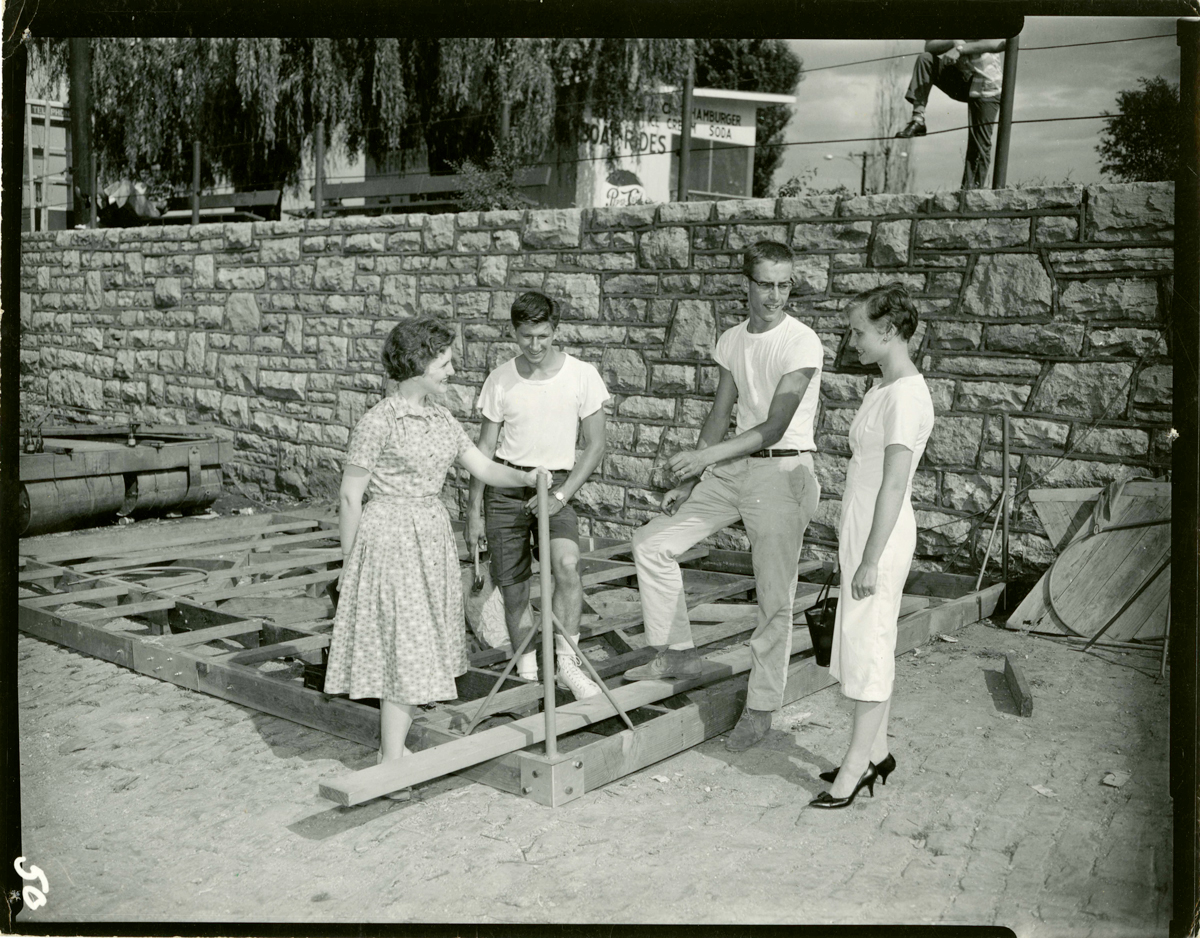 The Road to Hannibal

They called themselves the Mark VI, a takeoff on author Samuel Clemens’ famed pseudonym. Besides Zalesny and Alan Kumamoto ’62, both 19, the group included 18-year-olds Tony Kramer ’62 and Dennis Frawley ’62; Carlos Salazar ’62, 20; and military veteran Corrin McGrath ’59, “the old man” of the bunch at 23. McGrath’s relatively mature presence eased parental fears when, to everyone’s great disappointment, a family emergency forced Fox to pull out of the trip.

After plotting their course with river charts contributed by the Army Corps of Engineers, the six sailors had to design a raft big enough to accommodate them all for 21 days. That’s how long they estimated it would take to float from Hannibal, Mo., to New Orleans, a distance of a thousand miles as the crow flies, not counting bends in the river’s ancient path.

A couple of fathers who worked as engineers at Hughes Aircraft pitched in to help figure it all out. Huck’s fictitious raft was built from “fine pine planks,” a commodity easy to come by in 1884, when Twain’s iconic American novel debuted. Seventy-five years later, Huck’s 20th century counterparts had to settle for milled lumber and 55-gallon oil drums.

They first built a scale model from wood scraps and beer cans, and used that visual aid to solicit donations of construction materials — lumber, barrels, an outboard motor and a big tarp to use as an onboard tent. The project then moved to Santa Monica, where the actual raft took shape in Dennis Frawley’s backyard. As soon as they’d built it, the boys took it apart again and loaded all the pieces onto a 14-foot trailer.

All six of them crammed into Zalesny’s 1953 Mercury, three in the front seat and three in the back, with the overloaded trailer bumping along behind, piled high with empty oil drums and the prefabricated pieces of a 12-by-20-foot wooden platform.

Driving day and night on Highway 66, the young men made it from Santa Monica to Hannibal in only 48 hours. Along the way, they barely escaped death, when both car and trailer twisted and slid sideways for what seemed like forever along a rain-slick Texas highway frequented by long-haul truckers.

Still, they reached Hannibal unscathed and began reassembling the raft in a park at the river’s edge. By the time they shoved off, the Loyola crew had attracted a crowd of enthusiastic onlookers, including local officials and two children dressed as Twain characters Tom Sawyer and Becky Thatcher, who all waved goodbye from the dock as the raft slowly disappeared downstream.

“It would a been a miserable business to have any unfriendliness on the raft; for what you want, above all things, on a raft, is for everybody to be satisfied, and feel right and kind towards the others.” 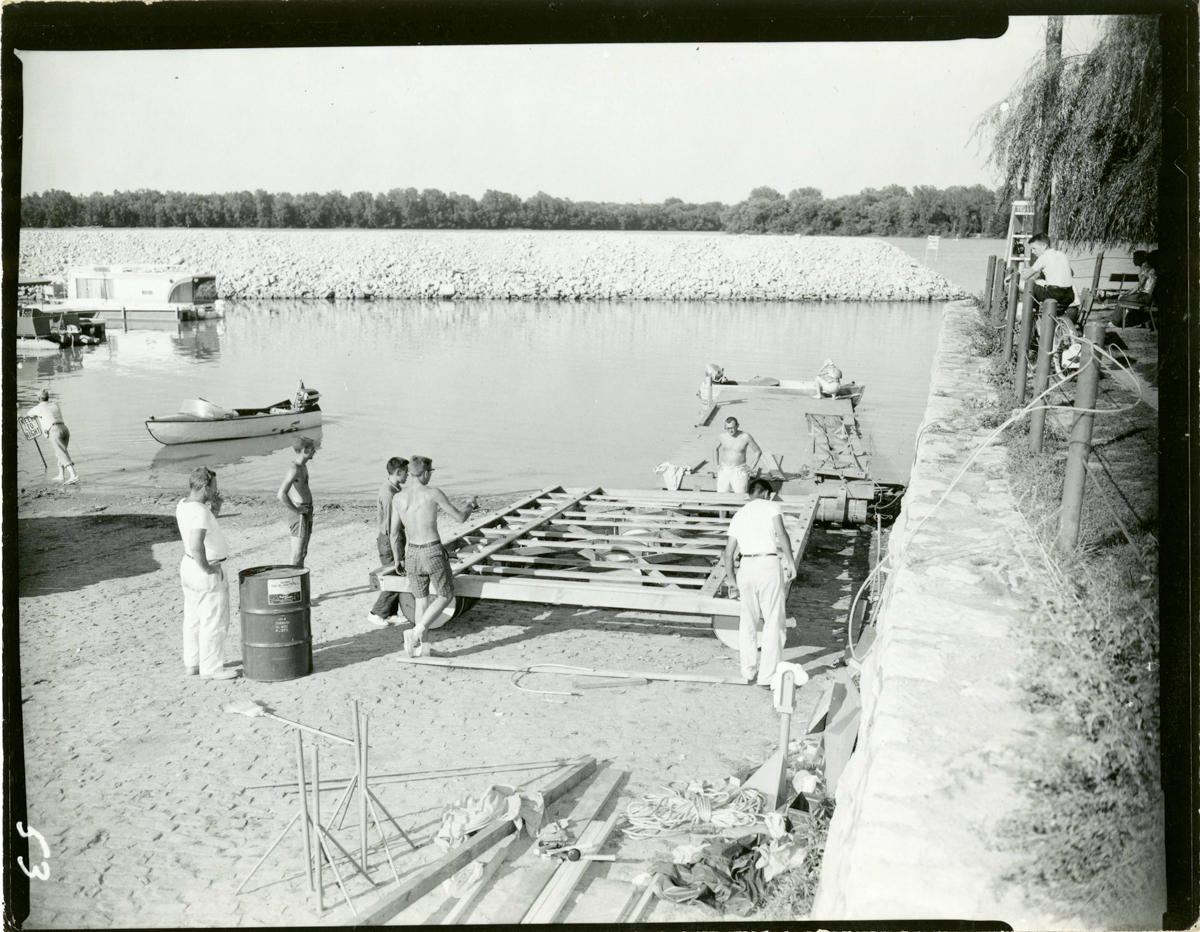 Lessons From the Mississippi

It didn’t take long for the Mark VI team to learn the first of many lessons the river would teach them. “You don’t put six guys on a 12-by-20 raft for that long,” says Kumamoto. “There was barely room to stand in front and back.”

While Huck often went swimming to stretch his legs, pollution dissuaded the Loyola crew from taking the plunge except when the muggy August heat, “mosquitoes the size of hummingbirds” or the stench of their unwashed bodies became unbearable.

To escape the cramped confines, they spent 10 days of their 21-day cruise docked at various riverfront communities — Cairo, Cape Girardeau, New Madrid. Because of Loyola’s media blitz, people along the way anticipated their arrival, and most welcomed them with legendary Southern hospitality.

“We were adopted by the locals, sometimes by youths and sometimes adults,” Kumamoto recalls. “They would pick us up and take us to the malt shop, feed us a meal, or take us in for the night.”

Local teenage guys showed up at the dock with buckets of beer, while giggling, big-eyed girls brought plates of home-baked cookies. “We learned about bridge dancing,” Kumamoto says. “You pull up to a country bridge, leave your headlights on, and dance. Of course, there were a few romantic interludes, and then we’d leave.”

But not everyone who lived along the river proved hospitable. The southern stretches of the Mississippi were a revelation to the visitors from Los Angeles. They floated past tidy villages populated exclusively by whites followed by shantytowns inhabited only by blacks. Salazar drew frequent stares from river folks unused to seeing Hispanic faces, and some restaurants refused to serve the group because of their brown-skinned friend. One surly bartender chased them from his establishment with a sawed-off shotgun.

The boys’ uncertainty about how any given stranger might react to them added an ominous undercurrent to the trip. “You do learn about yourself, what your fears and joys are,” Kumamoto says. “And about people, the others on the trip and those you meet. It was scary walking up some of those country roads and meeting strangers in the middle of nowhere where you can’t run or hide.”

Scariest of all, one steamy Sunday morning on a desolate stretch of water bounded by unbroken woods, the Mark VI team met an aluminum boat filled with uniformed game wardens, all armed with rifles and somber warnings. “Watch out for poachers through here,” one of them said. “They’ll shoot at you.”

“We catched fish, and talked, and we took a swim now and then to keep off sleepiness. … We had mighty good weather, as a general thing, and nothing ever happened to us at all, that night, nor the next, nor the next.” 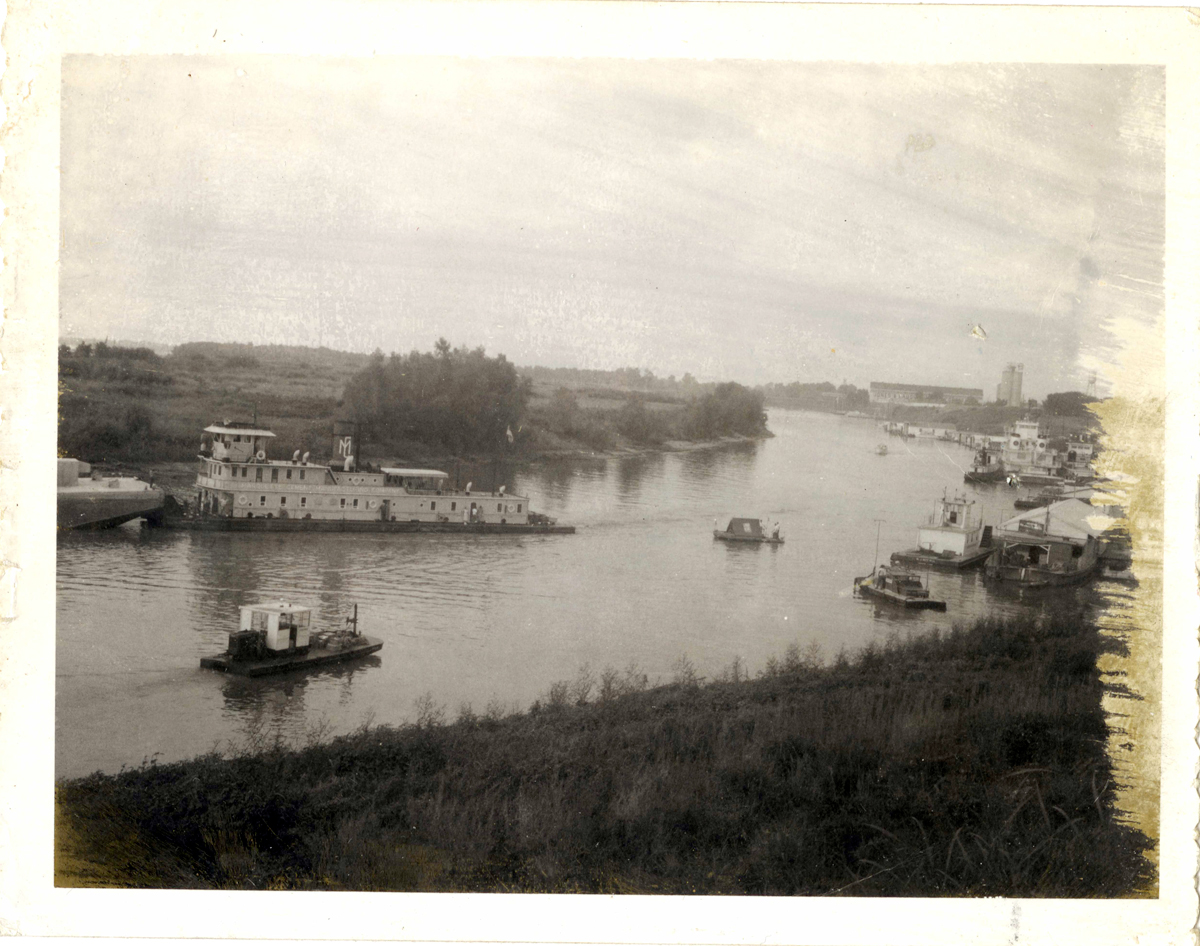 The Loyola boys lucked out. No one took a shot at them. None of the massive commercial barges that also plied the muddy waters ran them over. And they never suffered injuries more serious than bug bites.

By the time the crew pulled into Memphis, halfway to New Orleans, their 21 days had elapsed. It was time to head home for the start of fall semester. They reminded themselves that Huck himself had beached his raft in Memphis, and they declared their grand adventure a success. A physician and his wife who’d adopted the group way back in Hannibal met them at the dock and drove them back to Zalesny’s waiting Mercury.

But what do you do with a river raft after it’s carried you to the farthest corners of your imagination and then some? The Mark VI team sold theirs to locals who planned to use it as a fishing barge, for a while anyway.

“What most people don’t understand,” Zalesny explains, “is when you build a raft, from the day you put it in the water, it starts to deteriorate. Wood absorbs water, so it’s doomed to sink eventually.”

Memories of great adventures, however, whether fiction or reality, float on forever.