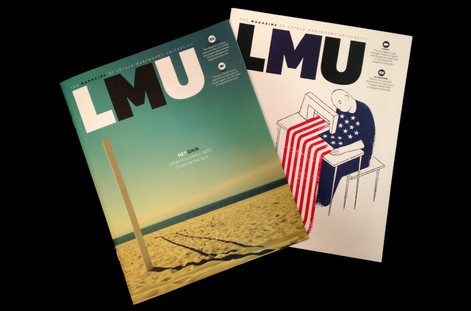 “Humility,” said T.S. Eliot, “is the most difficult of all virtues to achieve; nothing dies harder than the desire to think well of self.”

I think of humility as medication for pride, which is one of the seven deadly sins and maybe the biggest. Pride is a treatable affliction — it can be controlled reasonably well much of the time with humility’s topical ointment. But though humility may be therapeutic when applied to pride, it isn’t an antidote or cure. For most of us, vainglory, as pride is sometimes called, is a chronic, spiritually debilitating condition. What to do? “Exercise your humility regularly and avoid occasions, and near occasions, of tribute (sin)” — it’s easy to imagine a few Sisters of St. Joseph, who taught me in elementary school, admonishing me today with those words.

Despite having said that — Sister St. Dominic, patron saint of my writing career, forgive me for this — let me tell you that LMU Magazine received a bronze award for general excellence earlier this month in a national competition of university magazines. The Circle of Excellence Awards competition is hosted by CASE (Council for the Advancement and Support of Education), a professional association of college and university administrators. Magazines are first sorted by circulation, and our publication competes in the mid-range group — those with a circulation of 30,000–74,999. Judges consider each magazine’s objectives, content, writing, editing, layout and design, print quality, editorial content, photography, illustration, creative story ideas and effectiveness in serving its audience.

We submitted the summer 2014 (“Net Gain”) and winter 2014 (“Intertwined”) issues, and we shared the bronze award with Middlebury Magazine, published by Middlebury College. In their final report, the judges, who are anonymous, said they admired LMU Magazine’s layout, organization and wrap-around covers. Other winners in all three circulation groups included magazines from Johns Hopkins University, Oberlin College, Kenyon College, the University of Richmond, the Rhode Island School of Design and the University of California, Berkeley.

This year’s bronze, combined with last year’s gold in the same competition, marks the second year in a row LMU Magazine has finished in what I’d call a winners’ circle — those given a gold, silver or bronze award. To be so honored has occurred to only a handful of university magazines. That’s recognition our staff is proud of from professional and personal points of view. But I also hope — as a way of moderating my own vainglory — that the LMU community will take appropriate pride in knowing that in any conversation about universities with the best magazine, LMU will be discussed.