As an undergraduate, Effie Brown decided to transfer into the university’s film program. Expecting an argument, she prepared to defend her plan. But Brown was readily accepted. Today, she has more than 50 producing credits to her name in film and TV and is one of the entertainment industry’s leading advocates for diversity of content and talent. We spoke to her about race, gender, money, altruism and films. Brown was interviewed by Charles E. Swanson, professor and chair of the Production Department of the School of Film and Television.

The films you’ve associated yourself with span themes, ethnicity and identity. you’re an African-American who produces films, but it doesn’t seem accurate to say you’re a voice of only the African-American filmmaking community. if schools of thought shape Hollywood, how do you describe the school you’re part of?
I’m a part of the “Other.” I’ve always loved the movies where different types of people get together, even as a kid before I understood racial and gender divisions. I’m a sucker for the ensemble cast — “Alien,” because all of characters were together, “The Adventures of Buckaroo Banzai Across the Eighth Dimension” and “The Breakfast Club,” too. Even though the characters were all white, they were all types of people. I would love to do a “Fast and Furious,” where all different types of people who are culturally specific have to accomplish a common goal. That’s what America means to me: people coming together to overcome an obstacle. That’s my movie. You can call it “Other Filmmaking.” That’s what I’m into.

What movies would people be surprised to hear that you like?
I like ’70s sci-fi. My dirty little secret is I love Charlton Heston. I don’t care what anyone says about him. I have a big poster of him in my house. “Planet of the Apes,” “Soylent Green,” “The Omega Man” — that’s my jam. I love James Caan in “Rollerball.” Those are the movies that I want to make.

If demographics drive decisions about which films have financial potential, will we see more and more Latino-oriented films in the next 30 years because their percentage of the population continues to grow? And what does that imply about films for African-Americans if their percentage of the population doesn’t grow?
I will not pit African-Americans vs. Latinos vs. Asians vs. LGBTQ vs. women. That’s bull. That’s what people who are in control want us to do. When we start getting together and seeing ourselves as being all together, it’ll be a brand-new day. There has been an interesting conversation brought up about reverse racism, whether by promoting inclusivity and diversity we’re excluding white men. I’m not trying to do that; I’m not trying to say that. But you know what? White men, you are killing it right now. You got everything. You’re doing awesome. You guys are OK. You’re more than OK. These cats over here? We’re not OK. We’re not on the same playing field. I’m not trying to exclude you; I’m trying to get us up to the same level.

Is it a question of equity?
This is something we learned in kindergarten. It’s called sharing. There’s room at the table for everybody. I’m not saying get off the bench, just scoot over.

So, what keeps you going?
I did a bit of soul searching and realized that it’s being of service and giving back, no matter what. I think the thing that gives me the tenacity to keep going is that I do think I’m on a mission from God. This is my calling. I have no other choice but to do what I do. Period. Until God puts it in my heart to do something else. And I’m doing it by producing content for film and television because I know that stories are the way that you change the hearts and minds of people. The Bible, the Torah, the Quran — all the religious texts have done it through storytelling. Now I’m going one step further, I’m raising a film fund to make the movies I want to make. I want to promote nondominant voices on and behind the screen — women, people of color, the LGBTQ community, the differently abled community. I want us to have our stories told in front of and behind the camera. I think that we can really change the face of Hollywood. This is what I’m supposed to do. I’ve been doing it for 20 years; I just haven’t put a name to it. 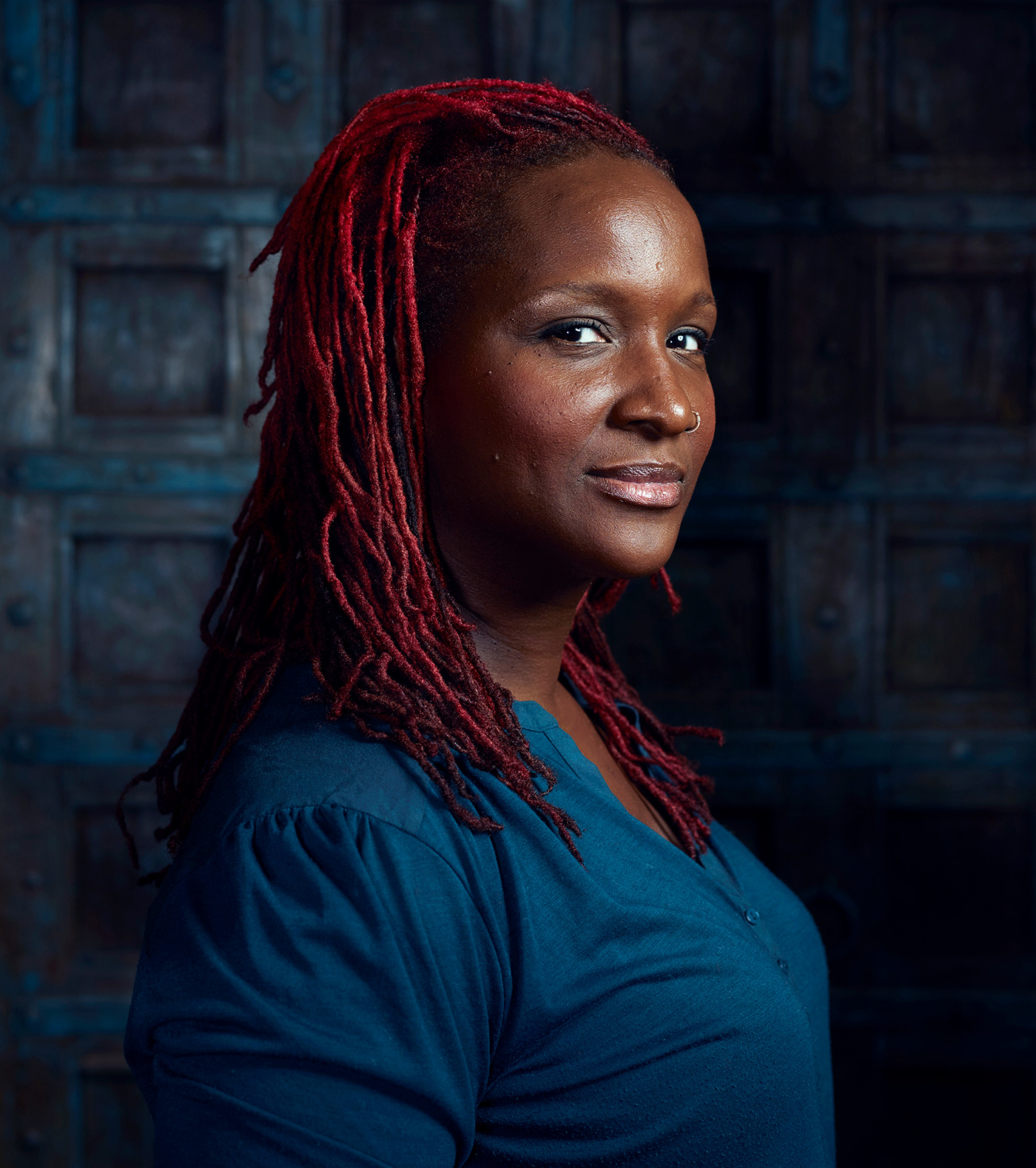 Let me suggest a name: Are you a warrior for untold stories?
For sure, I am a warrior. People see that as violent, but there is also a spiritual warrior. I want to change the game, but I want to do it through genre: thriller, action, sci-fi, horror. Those are the movies that draw a swath of people — people in Middle America, down South, and in the metropolitan cities. It’s not lost on me what happened in Charlottesville this past August, with white men marching with tiki torches and saying, “We will not be forgotten.” They, too, are feeling on the defensive. I feel we can go at it head-to-head and fight, or I can try to get into your heart and mind. Let me understand your story and where you’re coming from, and let me tell you where I’m coming from. But I’m not going to do it with films in which you see black bodies getting hung, by preaching, “White man bad! You did this!” I don’t think that works. If I can get you to see “Fast and Furious,” and you wind up cheering for the person who doesn’t look like you, who is not the same gender as you, I’ve won. Stories humanize. If you’ve liked someone like me, it makes it harder for you to shoot me, to rape me, to steal from me because I’m no longer someone who is apart from you. I’m a part of you. I love America. I’m an Army brat. I’m America do-or-die. I love the fact that we are a melting pot, and I will die for the fact that we are a melting pot. But now it’s time for people of color and women to put our money where our mouth is. So, I’m doing something very specific: I’m looking for money, anywhere from $30 million to $100 million. I say, “Let’s go make a movie that will be entertaining, and we can put the medicine inside the entertainment. We can educate as we entertain.”

Did your experience of LMU’s Jesuit tradition and its commitment to social justice shape your sense of who you are as a media producer and what you want to accomplish?
Absolutely. If you had asked me this when I first graduated, I would’ve had a totally different answer. But now that I have a little distance, my base of spirituality and God is a real big part of what I do and how I do. I really do feel that I’m responding to a calling. It’s also at LMU where I got turned on to Buddhism. What I love about LMU is that it blew my mind open in a lot of ways. I’m not Catholic, by the way. I’m AME — African Methodist Episcopal. But LMU was inclusive. That’s what I really appreciate: LMU instilled in me a spiritual inclusivity and the strength to not be ashamed of saying, “I think I’m on a mission from God.”

You came through the LMU program, so you have familiarity with SFTV. what should we do that we’re not doing?
A producing degree. Directing and writing — those are things you can get at a lot of places. But getting people to realize what producers and executives do — getting people educated on the business side — is how you change the face of a business.

You’ve worked in both film and television. Do films or shows ever get green-lighted because they should for altruistic or socially beneficial reasons?
No. It’s a business. Nobody cares. You can do the most altruistic movie, but nobody is going to give it to you. You can cobble together money from equity sources, or you can cobble it together from grants, but it’s a business. The question is who’s going to want to see this story. Because if you and five others are the only people who want to see this story, then do it on your iPhone.

He says, “Woman, I’m going to give you $1 billion to do with it what you want, but you can’t spend it on yourself.” What would you do?
I’d create my film fund, and I would create a filmmaking entity like Miramax and Good Machine back in the day. It would be a bit of a lie if I said I wouldn’t spend it on myself because my end game is that, on my death bed, I want to be able to look up and see the filmmakers, writers, directors, and content makers who I have ushered through and who have changed the face of culture. I already have a house and a car. I want to be able to leave a legacy. I want to make sure that women, people of color, LGBTQ people, differently abled people — all of us — are able to have our voices heard and to have compelling and entertaining stories. I want to be able to say I was able to help change the game. And then I’d say, “Thank you, sir, for the billion dollars.”