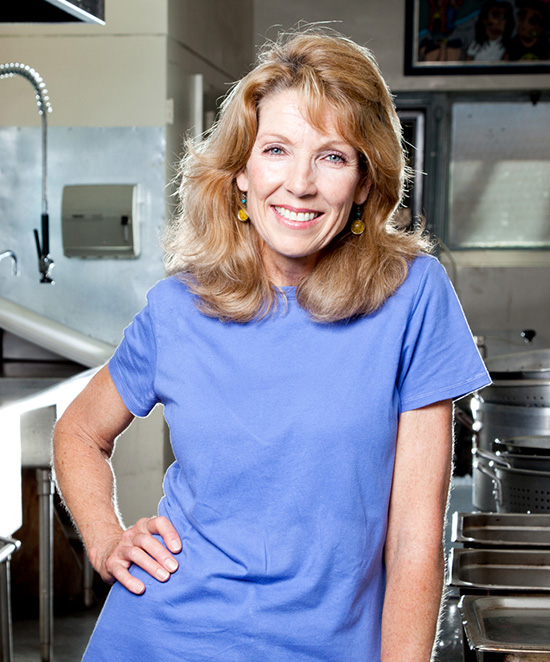 “I have a funny story,” says Maria Dzida about the day she became the first in her big, Irish immigrant family to graduate from college.

“After the ceremony, my grandmother pulled me aside. Her parents had come over from Ireland on a boat. Dirt poor, very simple, no education. And she’d only made it to fifth grade herself.

“So, she gives me this piece of advice: ‘Don’t be thinking you’re upstairs now.’ And I said, ‘Nanny, I promise I’ll never be upstairs.’ Now, as I look back, I realize I’ve kept that promise.”

For nearly 28 years, Dzida’s downstairs life, as volunteer director of the Loaves and Fishes Soup Kitchen at St. Joseph Church in Santa Ana, has brought love, hope and hot meals to thousands living at the margins of society.

Now a grandmother herself, Maria retired in August to embrace a new mission, sharing her faith and social justice values with “four darling grandkids.”

Maria Dzida easily could have chosen an upstairs life of suburban affluence. She married a successful attorney, Steve Dzida ’71, LLS ’74, and left her early career in social service career to stay home with their three young daughters.

But she missed working “close to the earth” with poor people. In 1990, when she heard Loaves and Fishes needed a director, she jumped at the opportunity.

“Without even thinking, I said ‘I’ll do it,’” she remembers. “Two days later, I found out I was pregnant with our son.”

Dzida balanced it all, even as her family grew and the job she’d envisioned as “a few hours a week serving a simple meal to a hundred homeless people” expanded into a major managerial position.

But Dzida has never seen services and programs as the goal. “What’s most important is not our charity but our recognition that we’re kin,” she says. “We’re all brothers and sisters.”

So, she worked to create a “culture of encounter,” bringing together upscale volunteers and inner-city clients, often with life-changing results.

“When affluent people begin to rub shoulders with desperately poor people,” she says, “they begin to learn each other’s names and stories. And suddenly all the walls we build to keep the other out, all the labels we attach, begin to melt away.”

After giving so much to so many, Dzida feels she, too, gained from her years in the Loaves and Fishes community.

“These folks have taught me so much,” she says. “They’ve taught me we humans are all made of the same stuff. And I’ve learned to recognize this downstairs perspective as truly holy ground.”

Sandra Millers Younger is the author of “The Fire Outside My Window: A Survivor Tells the True Story of California’s Epic Cedar Fire.” A frequent contributor to LMU Magazine, her “Operation Huck Finn,” which appeared in the fall 2013 issue of LMU Magazine, won a bronze award for best article in the CASE District VII Circle of Excellence Awards. This story is a slightly longer version of Younger’s profile that originally appeared in the summer 2017 edition of LMU Magazine.