Working with NGOs in Europe helped lead Cynthia Salim ’09 to create a clothing brand of women’s business wear that reflects her commitment to social justice. 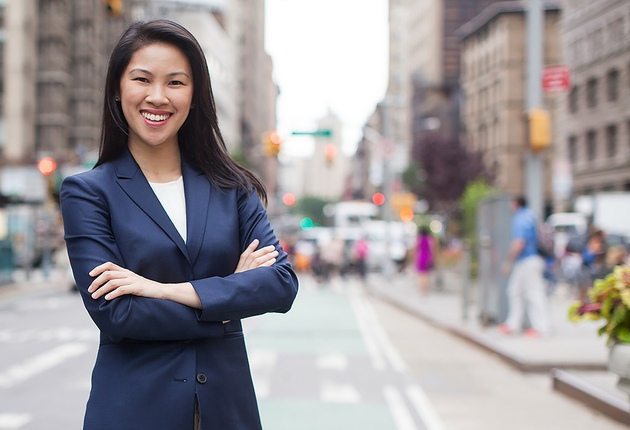 Stefan Slater ’10 is an L.A. writer who covers topics from comic book culture to surfing on the Great Lakes for local lifestyle magazines. He has written previously for LMU Magazine here. Reach him here.

Cynthia Salim ’09 founded a clothing brand, Citizen’s Mark, to produce socially responsible business clothing for young women. But her path, which took her to Europe and work in international social justice circles, was anything but straight or predictable.

Salim left LMU to pursue a master’s degree in human values and contemporary global ethics at King’s College, London. For someone who had majored in political science and worked with Students for Labor and Economic Justice and the Committee on the Status of Women as an undergraduate, her choice of degree made sense — as were her first steps into the world of employment: Salim worked with NGOs and nonprofits in Geneva, Switzerland, including the International Catholic Migration Commission.

That’s when Salim began to look closely at her work wardrobe. The daughter of two entrepreneurs (her father started a dictionary publishing house), Salim understood the importance of dressing professionally — even as a young intern. “I worked a lot on projecting credibility,” she says. Salim made sure to dress as professionally as possible, so much so, in fact, that others mistook her for a lawyer.

“Professional wear for women is designed for an older, more established demographic,” Salim says, “or it’s skewed for younger [women] and it’s made to look sexy.” She noticed that male interns in her field wore suits, but most female interns sported “business casual” looks — this, she noticed, might cause higher ups to assume that the women didn’t take their jobs as seriously as the men. “[Young women] don’t have a suit culture,” she says.

Early in her post-grad school career, Salim spent time hunting for business wear brands that were designed specifically for young women, and found little. “There’s a [fashion] gap for women on the rise — they want to look like a grown up, but they want to look age appropriate too,” Salim says. Following in her parents’ footsteps, Salim developed Citizen’s Mark, a New York City-based clothing brand. But, because of her commitment to social justice, she wanted to ensure that all of the materials used for Citizen’s business wear were responsibly sourced. And her experience and knowledge of Europe helped.

“It helped me to approach social change differently. You don’t have to just be an activist to bring about change—you can be an entrepreneur, too,” she says.

Founding a company with her goals, Salim says, has been exacting. “It’s operationally challenging to create an ethical supply chain. It’s technically challenging to find a good fit for a blazer — it took two and a half years to do both,” she says, adding that she worked full-time managing operations at another company while she was building Citizen’s Mark. But Salim is deeply invested in Citizen’s mission. Her brand, she notes, is promoting the image of the credible young woman — which is something she believes is sorely lacking.

“It’s an incredible feeling to think that, as a brand, you have the ability to portray women in a way that will change how people think of women in the workplace,” she says.