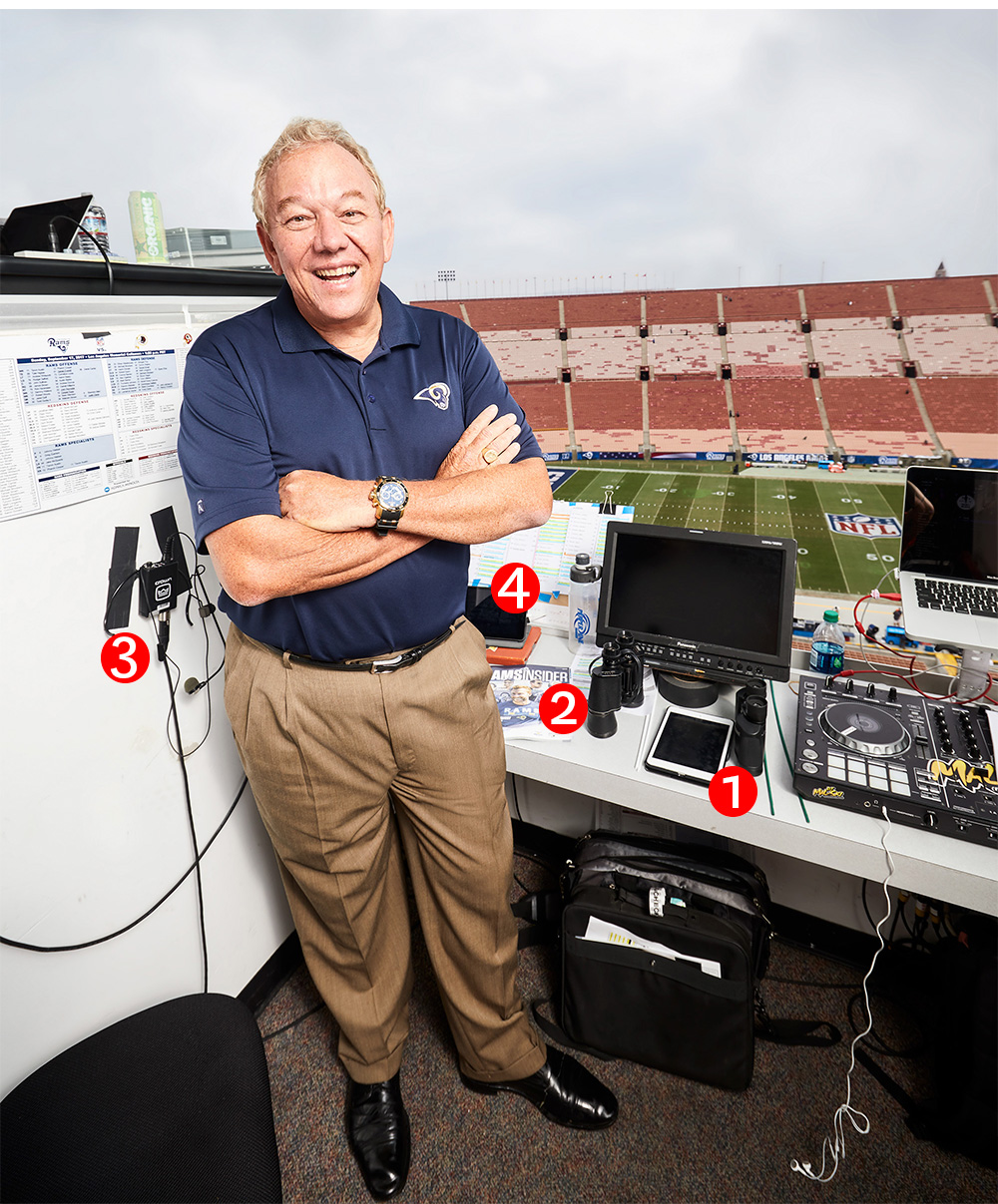 Sam Lagana has been the stadium voice of the NFL Los Angeles Rams in the Coliseum for the past two years, since the team returned to the L.A. area. He has been a Rams fan since childhood, when he attended games with his father. Lagana has spent 20 years announcing sports, including Davis Cup tennis tournaments and beach volleyball competitions. “My greatest satisfaction,” he says, “is seeing a family in the stands enjoying the game.” During the week, Lagana is associate vice chancellor at Pepperdine University. He and his wife, Eileen, a 1987 graduate of LMU, live in Pacific Palisades, California.

1. IPAD
The iPad gives me the “sho-flo.” It’s the producer’s way to communicate with the announcing team during the game. The sho-flo tells me, for example, what we’re going to do during a time-out — thank the grounds crew, do a public announ-cement, or run video on the stadium screens that needs a voice-over.

2. BINOCULARS
My binoculars are essential. In the Coliseum, we’re probably 90 rows up and pretty distant from the action. Some numbers on jerseys can look almost identical from that distance — Nos. 22 and 23, 86 and 88, 96 and 98. The binoculars are old, so they’re heavy. This pair belonged to my father. I used them as a kid when my father took me to Rams games.

3. MICROPHONE
Most essential of all, my mic. I prefer to use a headset rather than a microphone mounted on the table. For one thing, we stand throughout the entire game; there’s no sitting. The body of the mic apparatus is clipped to my belt and has a “trigger,” rather than an on-off switch. I hit the trigger whenever I speak during a game. I have one hand on the trigger at all times, and my other hand is free to make notes, check my board or pick up my binoculars.

4. BOARD
My “board” has rosters for both teams. Preparation takes about six hours per game, and that includes putting the board in numerical order and color-coding the list according to defensive players, offensive players unlikely to touch the ball (guards and tackles), and those who run, pass or catch the ball. I keep the board in front me as I watch the game so I can refer to it quickly.