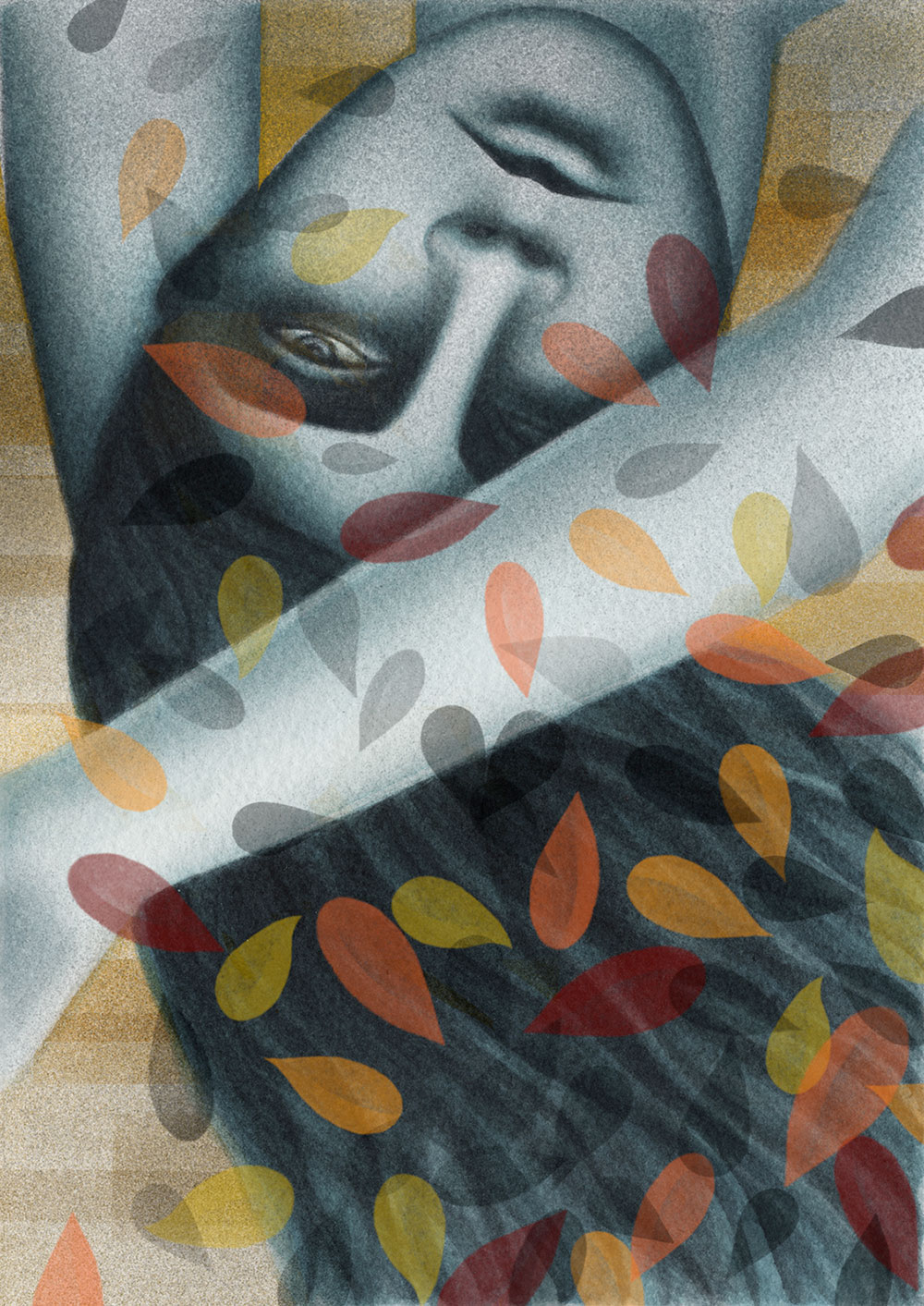 In our feature on The Seven Deadly Sins, novelist Susan Straight writes about sloth.—The Editor

Proverbs 19:15: Slothfulness casts into a deep sleep, and an idle person will suffer hunger.

Since I was not raised in a religious household but by a Swiss mother, from a country famous for perfectionism, where no one would consider working on a vehicle in a front yard strewn with car parts, because that would be illegal, and so as children we raked leaves even while the Santa Ana winds blew them from the branches, the conflicting definitions of sloth have always fascinated me.

Proverbs 6:9–11: How long will you lie there, O sluggard? When will you arise from your sleep? A little sleep, a little slumber, a little folding of the hands to rest, and poverty will come upon you like a vagabond, and want like an armed man.

But Americans are obsessed with work, with time, and so they work even in bed, their screens’ cerulean blue flickering on the sheets and darkened walls of nighttime. They are working too hard, so they order just one more thing online because they do not have time to shop for Clothes Food Jewelry Dogfood Fishfood Couches Books Curtains and again Clothes.

But this is not how America works! Americans are not sleeping. They are anxious, convinced they don’t have the right items that will transform them into happier beings. They don’t even have the right mattress, pajamas or sleep medications, and maybe they should order one more thing, in the dark. Dogfood. Always dogfood. I have a dog. I know.

But I get dogfood at the pet store that has been in my neighborhood for 40 years, near the bank where my mother worked, where I still go, and the grocery store, Staples, my auto repair guy and Goodwill. That is my small orbit, and it seems laughable.

The last time I drove the 55 miles to L.A. to visit my youngest daughter, who is in college, it took two hours. I counted 56 trucks in one minute, heading east, from the ports of L.A. to the rest of the country; I was heading west, among as many trucks that had come from the millions of square feet of fulfillment centers and warehouses, which are the major industries of my county. The trucks carried boxes. Thousands of hands had found mattresses, dogfood, earrings, Nikes in fulfillment centers and put them on the line where other hands plucked them and put them in boxes loaded into trucks lined up like horses in stalls, waiting patiently. Stitch Fix and Blue Apron and Amazon and Walmart and Target. One box may hold one jacket.

Jimmy John’s will deliver one sandwich. One. Parked to wait for my daughter, I counted 14 vehicles, which slid up to the red-curb zone while men leaped out holding phones, texting, looking up, and younger men came out of the locked gate, holding phones, texting, looking up. Then a single bag was handed over. The younger men sometimes bleary-eyed, sometimes wearing pajamas, sometimes wearing fine clothes, but all hungry.

This, then, is not about sloth, or sluggards, or even gluttony or envy. Perhaps it is ants. Proverbs 6:6–8: Go to the ant, O sluggard; consider her ways, and be wise. Without having any chief, officer or ruler, she prepares her food in summer, and gathers her sustenance in harvest. But this is not accurate. She has a queen. We have a queen. She is ensconced in the lush nests of our brains, behind our eyes. We consider the lowly soldier ant, in the mirror, and then glance down at the screen.

Susan Straight is Distinguished Professor of Creative Writing at UC Riverside. The author of eight novels and many essays, Straight is a recipient of the L.A. Times Book Prize’s Robert Kirsch Award for Lifetime Achievement. Her “Highwire Moon” was a 2001 National Book Award finalist.