For a group of LMU students, spring break 2016 was spent speaking with migrant workers forced to cross a border and leave the only place most have ever known as home. In this case, the border was that between the Dominican Republic and Haiti on the Caribbean island of Hispaniola, which those nations share, not the border between the United States and Mexico. 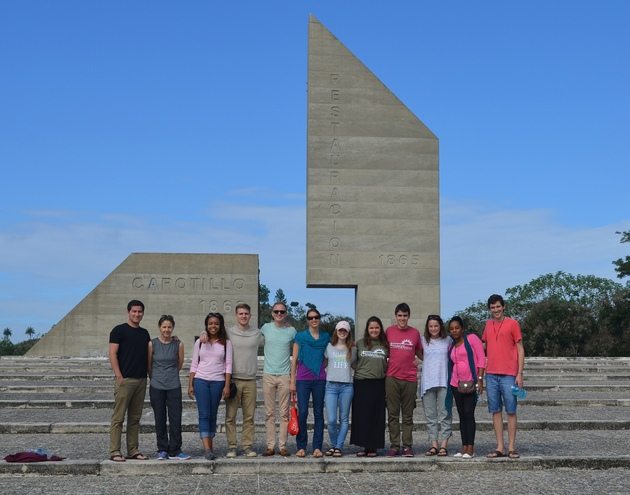 LMU students and faculty visited the Capatillo Monument to Dominican independence in the border city of Dajabon.

Michael Amodei ’79, M.A. ’86 is executive editor of Adolescent Curriculum at Ave Maria Press, a ministry of the Congregation of Holy Cross, located on the campus of the University of Notre Dame. He is the author of “Catholic Essentials: An Overview of the Faith” (Ave Maria Press, 2009) and several other resources for Catholic religious education. He and his wife, Lisa Sosa Amodei ’82, live in South Bend, Indiana. They have four adult children.

From Feb. 26 to March 7, LMU undergraduates examined racism, deportations, binationality and community in the Dominican Republic and Haiti in a faith-based immersion program known as Ignacio Companions. Students heard presentations from local representatives on both sides of the border with Haiti, while living among people who are directly affected by an unstable economy.

Participants also considered the role racism and native origin plays in deportations. The Dominican Republic has been criticized internationally for its deportation policy, particularly with regard to deporting Dominicans of Haitian descent. Haitians tend to be darker skinned than Dominicans. Some are French-speaking (Haiti was originally a French colony) and most speak Haitian Creole, while the native language in the Dominican Republic is Spanish. In addition to being immersed in the area’s political and economic issues, students worked side-by-side with community members and joined in prayer and faith-based reflection.

The Dominican Republic/Haiti IC program was the fourth for LMU senior Joaquin Loustau, one of two student leaders on the trip. A computer science and theological studies double major, Loustau says he has “witnessed fellow students leave the comfort of this green, lush campus and spend a week with those whose stories don’t make the news, with those often forgotten or ignored by society. And because of these encounters, many fellow students have changed their academic paths, their careers and even decided to give the first few years of post-graduate life to service for others.” But the program has changed Loustau himself as well. “Ignacio Companions has opened my heart and made me sensitive to the struggles of people in the world. I am now more in tune to [others’] lives.”

The IC program began at Loyola Marymount in 2010 at the urging of James Erps, S.J., director of Campus Ministry. After returning to LMU in 2009 from a campus ministry assignment at Boston College, Erps saw that the Campus Ministry office was sponsoring a very successful and popular service program, De Colores, that by then had been operating in Tijuana, Mexico, for about 25 years. Erps wanted to extend service immersion programs farther, and he believed the faith element of De Colores also would be essential to new Campus Ministry service immersion opportunities.

“A faith component is important,” Erps says, “because it derives from our Catholic and Jesuit traditions and mission at LMU.” LMU students are able to engage in deep and meaningful ways in the places and with the people they visit, including connecting with their vibrant faith life. The program’s Catholic foundation is embodied in daily prayer and reflection, and Mass is celebrated at least once on each trip. “You don’t have to be Catholic or a person of strong faith to be part of Ignacio Companions, but you have to be open to conversations about faith and the spirituality of the local culture,” says Erps.

Students in the IC program come from various academic majors. Trips begin with an orientation session at LMU. Many students are fluent in Spanish, and once on site they usually stay in or near Jesuit centers in the area. The local Jesuit teams are closely involved with the students’ safety and their outreach in the area. This year, trips are scheduled for Chile, Nicaragua, Jamaica, Ecuador and Belize.

Loustau, who participated in IC trips in Jamaica and El Salvador, says a conversation he had with a man from San Salvador has remained with him ever since. “He told us, ‘We don’t need your labor force. We have plenty of people to do the work. We need you to carry our stories back home.’ By listening to their stories and by sharing them, Ignacio Companions is helping to build a larger community of kinship. Really, Ignacio Companions is the key part of the LMU experience and a very concrete way the university lives out its mission.”