Politics around the world looks increasingly fueled by mobilized hate. 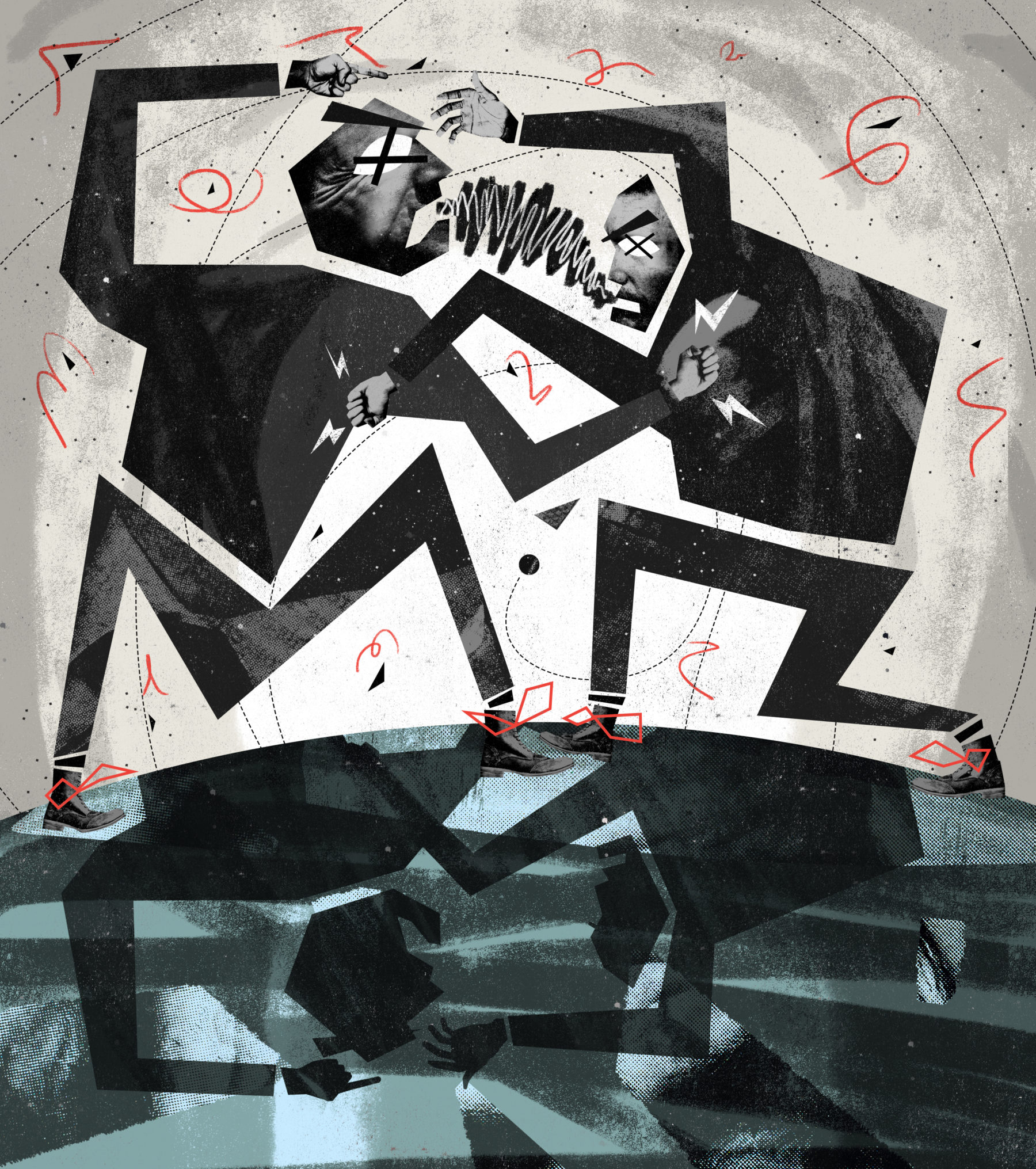 If you’ve been paying attention over the past few years, you might have been alarmed by the cruel spirit that’s taken over politics around the world. It’s not just the usual spectacle of pols denouncing each other in speeches: It’s demagogues targeting refugees in Europe and a ruling political party in India demonizing Muslims. It’s a movement in the U.S. that boasts of racial superiority and marches with torches to assert it.

It’s angry rhetoric from political leaders and unsponsored violence in places designed for solace or recreation: a black church, a gay dance club. It’s massacres at synagogues and a gunman in El Paso who kills 22 people because of what he calls “a Hispanic invasion of Texas.”

It’s not easy to quantify something as abstract as hate. But the FBI has charted a steady rise in hate crimes since 2015. The Southern Poverty Law Center documented 1,020 hate groups in the U.S. in 2018, with 2019 likely to set a new record. Many of us shake our heads, wonder where this has come from and ask how it’s emerged not only in nations with histories of ethnic hatred but in reasonably stable, affluent democracies.

There’s at least one discipline, though, less startled by the current divisiveness. Its practitioners see the same things we do and lament them no less. Talk to social psychologists, and one thing you may hear, again and again, is an utter lack of shock. “As someone who studies these issues,” says Adam Fingerhut, associate professor of psychology in the LMU Bellarmine College of Liberal Arts, “I’m not surprised.”

Most assessments of our angry age consult historians, political scientists or experts in international relations — thinkers who look at how changing borders, political trends or shifts in technology lead some nations, and some eras, to be hotter or cooler than others.

But social psychologists differ from these groups in one important way: What they study — the human mind — has not changed significantly in many thousands of years. What we’re seeing now, they say, has been with us a very long time.

Our brains like shortcuts, especially when we’re overloaded. The idea that an out-group is responsible for all our problems can simplify things for us.

Social psychology looks at the workings of the psyche in relation to other people — groups of friends, family members, co-workers, enemies — rather than in isolation.

Perhaps the key frame these thinkers use is the notion of an in-group vs. an out-group, categories familiar to most non-specialists. Máire Ford, associate professor of psychology in the LMU Bellarmine College of Liberal Arts, says humans have viewed the world that way since the species’ earliest years: “The people in our in-group were safer to us and the most likely to cooperate with us,” she says. The other group was often a threat, a rival for resources.

Millennia have passed since the days when most Homo sapiens lived in tribal bands, but the instinct hasn’t left us. It’s so strong, in fact, that researchers see it when they break a collection of subjects into two groups based on something as arbitrary as a coin toss. “People will start to allocate more resources to their group,” Ford says, “and will even report liking the people in their group better.” Again, these are people who have nothing in common except flipping heads on a quarter.

From this basic setup comes a lot about the way we function socially. Sometimes this arrangement leads to resentment of outsiders, though social psychologists typically don’t use the term “hatred.”

Nora Murphy, associate professor of psychology in the LMU Bellarmine College of Liberal Arts, teaches a class that shows how the in-group/out-group arrangement shows up in the everyday world. The course — “Stereotypes, Prejudice and Discrimination” — applies social science to these familiar categories. A stereotype, Murphy explains, is a belief — “All Muslims are terrorists.” A prejudice is an attitude — “I don’t like Muslims because they are all terrorists.” Discrimination is an action — “We should ban Muslims because they are all terrorists.”

The groups that receive the brunt here — Irish immigrants, black people, single women — change over time. But our tendencies to feel, think and act this way live inside us, whether we like it or not. “This happens at a group level,” Murphy argues. “We’re not saying that people are conscious of them happening — we still react to those societal messages.” This is termed implicit bias. “People don’t like to hear that they are hostage to forces they can’t control or don’t approve of.” Approve or not, when a sense of threat or hostile social norms surround us, these tendencies express themselves in fiercer-than-usual form.

Social identity theory, Ford says, can help make sense of what’s happening in the world these days. Group identity can be fairly benign, and nearly everyone has some connection to a subculture or community. But this sense of belonging can also cause us to lash out at others. Sometimes it leads to dehumanization — describing immigrants as rapists, for example, or gang members as animals. “Once you dehumanize them, you decrease empathy,” Ford says. “There’s less reason to treat them like fellow humans. So, you get people feeling comfortable being blatantly racist.”
Scapegoating — “more likely to happen when you have a shortage of resources or a threat to your identity,” Ford says — works the same way: Our brains like shortcuts, especially when we’re overloaded. The idea that an out-group is responsible for all our problems can simplify things for us — and send us in unpleasant directions.

The human mind can be tipped into rage, hatred and stereotyping fairly easily.

“Social dominance theory,” Fingerhut says, “suggests that pretty much every society in history has existed with some kind of hierarchy.” People at the top work to keep themselves there. “And when the status quo is threatened, they resort to prejudice to justify their place at the top.” This also leads to “legitimizing myths” — notions that blend true and false but are designed to keep things from changing.

We saw this process at work, he says, with the backlash around same-sex marriage: The move toward marriage equality provoked hostility as well as the Defense of Marriage Act, as if gays and lesbians were attacking a vulnerable institution rather than trying to be included within it.

Social dominance and prejudice cross all political affiliations, Fingerhut says. “This is not just the Right: This is a human phenomenon, that we want to protect our identities, that our sense of self-worth is tied up in them. We become irrational in this sense.”

Of course, all of these human tendencies express themselves differently depending on conditions in the outside world, and that’s where a historian’s perspective proves useful. What we’re seeing now, says Elizabeth Drummond, associate professor and chair of the Department of History in the LMU Bellarmine College of Liberal Arts, is a convergence of several trends, some of which take human nature and bend it into especially ugly shapes. “There are particular political contexts,” she says, “where hate is mobilized.”

Drummond, who teaches a course on Nazi Germany, knows all too well how political rhetoric, economic uncertainty and other forces can push people to act more harshly. We are not seeing a reprise of 20th century fascism today, she cautions, but this is a period of instability for a lot of people. The refugee crisis in Europe, the shock of a black U.S. president, a global recession that left permanent wounds and changing demographics have all raised temperatures. Throw in politicians who know how to engage anger, social media that thrives on nastiness, and the ability of extremists to meet and collaborate on white supremacist and hate-driven websites, and the fervor is amplified.

We are also, Drummond says, emerging from a pause, a relaxation of aggressions, that was historically specific: After the Holocaust and World War II, both Axis and Allied nations committed themselves to a period of healing. It has become clear where ethnic hatred could lead. But despite an official rhetoric of tolerance and cooperation, the resentful side of human nature didn’t disappear.

The human mind, then, can be tipped into rage, hatred and stereotyping fairly easily, especially when the right conditions are met. In the totalitarian world of George Orwell’s “1984,” some characters practice what is called Two Minutes Hate, a daily period of outrage aimed at various enemies, some of whom may be imaginary. This — or the rage and stylized hatred we see at a professional sporting event — may seem like a slide down the evolutionary ladder. But it’s actually sapiens at their most human.

Hatred, luckily, is not all the mind does: There are ways to soften our harshest instincts even if we cannot eradicate them completely.

“Intergroup contact tends to bust the prejudice, reduce the sense of us vs. them,” Murphy says. A meeting of, say, Israeli and Palestinian teenagers can ease tensions, but it has to be done right, with a sense of a shared goal and two sides coming together on equal footing.

It also helps to be aware of our prejudices and to become self-critical. “We need to have cognitive space to do it,” Murphy says. “It’s like a muscle you need to work.”

Similar exercises can enhance our sense of empathy. Studying the social sciences — which are about reason and discerning credible from uncredible sources — can undercut tendencies to intolerance.

None of it is easy, Fingerhut says. “These phenomena, from a social-psychological perspective, are hard-wired into our brains even if the categories — the in-groups and out-groups — change.” As for the larger dynamic, he concludes, “That ain’t going anywhere.”

Scott Timberg, a frequent contributor to LMU Magazine, passed away Dec. 10, 2019. A highly regarded commentator on arts and culture, he was the author of “Culture Crash: The Killing of the Creative Class.” His work appeared in many media outlets and publications, including The New York Times, Los Angeles Times, The Guardian, and Los Angeles magazine.