The Freedom Ride From L.A. to Jackson

In July 1961, Helen Singleton M.A. ’85 joined the Freedom Rides and took a train trip that started in Los Angeles and ended in a Mississippi prison. 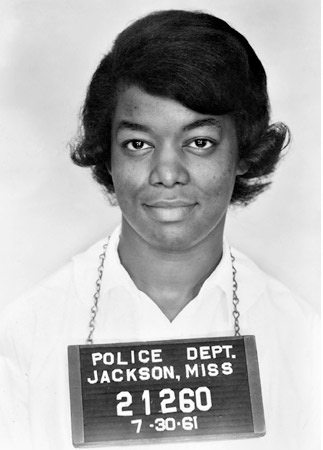 Helen Singleton was held in Parchman State Penitentiary in Mississippi as a member of the Freedom Riders in July 1961.

In the spring and summer of 1961, hundreds of Americans, known as Freedom Riders, from cities and towns across the United States traveled to Alabama and Mississippi to defy state laws and end the segregation of public transit. Despite U.S. Supreme Court decisions that ruled segregated interstate travel and facilities unconstitutional, the practice endured. Freedom Riders were beaten, arrested and jailed for their nonviolent protests, and in Mississippi hundreds ended up in Parchman State Penitentiary, the state’s most notorious prison. Helen Singleton ’85, who then was a student at Santa Monica City College and later earned a graduate degree at Loyola Marymount University, was one of a contingent of students and civil rights workers from Los Angeles who traveled by train to Jackson, Miss. Singleton was arrested there, along with her husband, Robert Singleton, a UCLA student at the time and now associate professor of economics at LMU. She was interviewed, via e-mail, by Editor Joseph Wakelee-Lynch.

Were you involved in civil rights activities prior to going on your July 1961 trip?
We were involved in civil rights activities prior to our July 1961 Freedom Ride activism. We had organized picketing activities in front of F. W. Woolworth stores in Santa Monica in sympathy with the sit-ins that were taking place in Greensboro, N.C., and other parts of the south. We had also organized activities against segregated housing in Los Angeles’ west side. Bob had been involved in integrating the barber shops in Westwood so that African American students could get their hair cut, just as white students could.

By the time you started your trip, you knew other Freedom Riders had placed their lives in jeopardy. Did you understand that you could die?
Yes, I understood the risk.

Where did the courage come from to accept that risk? Your faith? Your determination to fight for freedom? Something else?
The courage came from a lifetime of experiencing efforts of white supremacists to demean my personhood and control my existence. Most of these experiences occurred when I visited my grandmother in Lawrenceville, Va.

What was the most frightening part of the experience? The confrontations and arrest? Or being taken to prison?
I was not frightened in the true sense. I was wary. Through CORE training and orientation sessions, we had been informed of what could happen. I felt that I could handle whatever came.

You were placed in Parchman State Penitentiary. Was the prison as frightening as its reputation?
Again, it was not “frightening,” but something to be endured. We were placed in Parchman’s Maximum Security Unit (we would sing “All Hail to MSU” when new Freedom Riders came in). The gas chamber was in full view at the end of the corridor. We received “prison treatment” with a bit of an edge since the wardens and trustees held us in contempt. They would threaten to take away our privileges if we sang. We had nothing that we considered privileges, so we sang at will.

Your husband said, at an on-campus screening of the new documentary “Freedom Riders” last week, that after your group was arrested you were separated by race and gender, leaving you, the only African American woman, alone in a cell. What was that experience like?
I was first put in a cell with other women who had been arrested for various reasons. The second night, after our “trial,” I was separated from the others until we were driven to Parchman on the third day. I coped with just a pallet on the concrete floor and a rat that I managed to outsmart.

You were unusual in that your husband was also going with you as a Freedom Rider. Did you worry about his dying in this effort, and how did you deal with it?
I went with him.

Did the two of you ever say to yourselves, “One of us should do this, but we shouldn’t both take this risk”?
No.

How did your family feel about your decision to be a Freedom Rider?
Our families were supportive, but very concerned. We did not have to ask for their permission to go as other students did. We were both over 21. We called to inform them the night before we left.

It’s easy for me to conclude that this was a kind of “top of the mountain” experience for everyone involved, and it was for many. But did you find that being a Freedom Rider prepared you for something else later in life?
Yes. It informed my actions from then on. I had a sense of efficacy that I did not previously have.

What do you think is the lasting legacy of the Freedom Riders?
The Freedom Rides showed that African Americans were no longer afraid and were willing to force an issue, in this case, the two Supreme Court decisions that the U.S. Department of Justice was not enforcing. The Freedom Rides also revealed the ugliness of white supremacy to the world. Most people were horrified by the violence. They also created the new reality that violence could no longer squelch civil rights activism.

Have you ever found a good way to describe what it’s like to live your life in the movement?
No.

This interview was first posted at LMU Magazine Online in March 2011. Photo courtesy of Eric Etheridge, author of “Breach of Peace: Portraits of the 1961 Freedom Riders.”