1789 – The U.S. Constitution
Article I, Section 2 establishes that voting eligibility for the House of Representatives will be set by each individual state rather than the federal government. This approach created a patchwork of voting rights that continues to this day. Many states limited the franchise to white, property-owning males, although some, such as New Jersey, allowed women and free blacks to vote.

1870 – 15th Amendment
The 15th Amendment prohibited states and the federal government from denying the right to vote based on “race, color, or previous condition of servitude.” Combined with the efforts of Reconstruction, it resulted in the first black elected officials in Congress. After the amendment’s passage, some states added poll taxes, literacy tests and grandfather clauses to exclude blacks from the franchise. In 1944, the Supreme Court ruled in Smith v. Allwright that states could not allow parties to conduct primary elections that permitted only whites to participate.

1920 – 19th Amendment
This amendment prohibited the states and federal government from denying the right to vote based on sex, extending the franchise to women. The Supreme Court earlier had rejected efforts to claim that the 14th and 15th Amendments protected women’s right to vote. 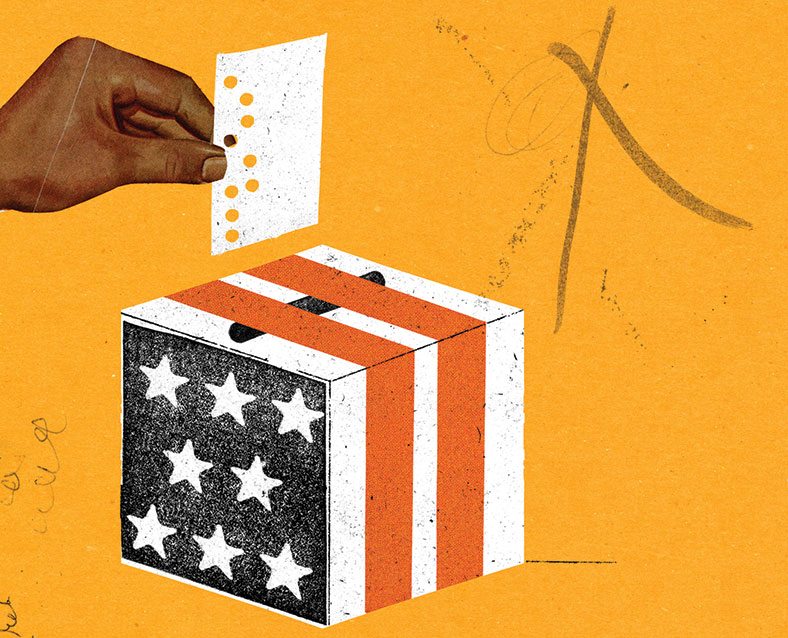 1998 – Oregon’s Vote-by-Mail
Oregon became the first state to adopt a vote-by-mail system in an effort to increase voter turnout. Registered voters receive their ballot by mail and can either return it through the mail or at designated drop-boxes up to election day. Research shows that decreasing the cost of voting can increase overall turnout.

2002 – Help America Vote Act
In the wake of voting controversies in the 2000 presidential election, Congress passed the Help America Vote Act. This act provided funds to the states to update old voting equipment, such as punch-card systems, mandated the availability of accessible voting equipment for disabled Americans, and established more uniform election administration standards across the states.

2008 – Crawford v. Marion County Election Board
Beginning in 2002, some states began adopting laws requiring voters to present ID to vote. Indiana and Georgia enacted a strict, photo-required voter ID law in 2005. This was upheld by the Supreme Court in 2008, leading 20 more states to increase their voter ID requirements. The impact of this legislation is unclear. Much of the evidence of negative impact on minority and youth turnout is statistically insignificant, and instances of voter fraud of this type are virtually nonexistent.

2013 – Shelby County v. Holder
In Shelby County, the Supreme Court struck down a Voting Rights Act provision that allowed the federal government to continue monitoring elections in states that discriminated on the basis of race in the 1960s. The court concluded that enough time had passed and that Congress needed to change its formula in order to respect the “equal sovereignty of the states.” The repercussions are still being worked out, but the ruling does significantly increase the risk of decreasing minority participation.

2015 – New Motor Voter Act
In October, California passed legislation to automatically register eligible voters when they receive or renew their driver’s license. As with early voting and election-day registration, this legislation is intended to lower the costs of voting in order to increase voter participation. But actual turnout is highly dependent on candidates and parties mobilizing voters to show up at the polls.