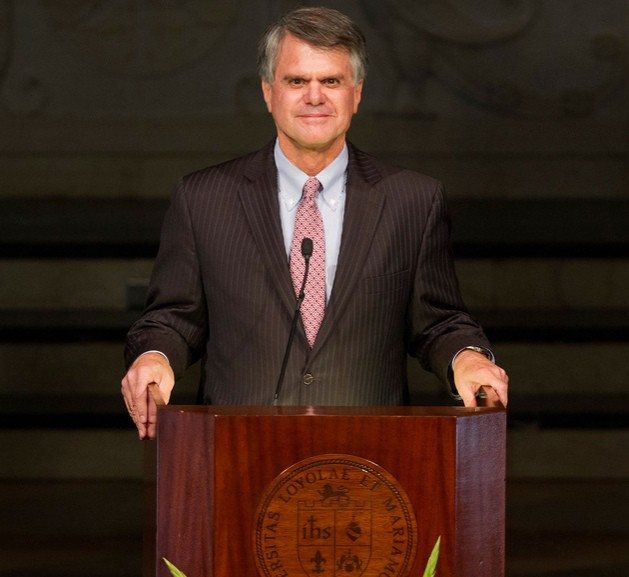 Burcham, 63, became the university’s 15th president in October of 2010, after serving as provost, executive vice president, dean of Loyola Law School and a professor of constitutional law. In all, he will have spent 24 years at the university when he leaves office on May 31, 2015.

“My years as president have been a highlight in my professional life, and I thank each of you for your commitment to LMU and its mission, and for carrying on the work of this noble profession,” Burcham said in a letter to the university community. “We have much to accomplish this year, and I look forward to our efforts together as we strive to continually improve our university.”

During his tenure as president of LMU, Burcham oversaw the completion of the $400 million “Right Place. Right Time. The Campaign for LMU” fundraising campaign and the launch of a $100 million Scholarship Initiative, with the goal of increasing student financial aid. Under Burcham’s leadership, the university kept tuition increases below nationwide averages while setting records for the number of student applications.

Kathleen Aikenhead, chair of LMU’s Board of Trustees, praised Burcham’s accomplishments as LMU’s president and said the board reluctantly accepted his decision to resign.

“President Burcham has been an exceptional leader for LMU,” she said. “On a personal level, many of you have gotten to know David Burcham and have witnessed firsthand the qualities that motivate him to bring out the best in all of us. He is a man of integrity and fairness, and he is always true to his values. No matter what, he places what’s best for the university above all else.”

Burcham graduated first in his class from Loyola Law School in 1984. He clerked at the U.S. Supreme Court for Justice Byron White (1986-87) and the U.S. Court of Appeals for the 3rd Circuit for Chief Judge Ruggero J. Aldisert (1984-86). He worked in private practice at Gibson, Dunn & Crutcher from 1987 to 1991. A native of Southern California, Burcham earned a B.A. in political science from Occidental College in 1973, and a M.A. in education administration from Cal State Long Beach in 1978. He was a teacher and administrator in the Long Beach Unified School District.