It’s a steamy August morning at the Kenneth Hahn State Recreation Area fishing pond off La Cienega. The park is scarcely populated, and the catfish appear to be outsmarting the few sullen-looking fishermen standing by. The only movement is on a rolling hill west of the pond. Silhouetted against the skyline, a rusty oil rig bobs rhythmically. Eventually, the sounds of clanking metal and rumbling trucks fill the air, and one is reminded that man and nature continually struggle to find some sort of tolerable equilibrium.

The adjacent Inglewood Oil Field is the largest urban oil field in the nation, producing nearly 400 million barrels since 1924. As much as 50 percent of the field’s reserves remain, according to its operator. However, the Inglewood field is often cited in the contentious debate over the benefits and harms of hydraulic fracturing, or fracking. Pitting the desire for energy to keep homes lit and cars fueled against the fears of contaminated water and destabilized earth, fracking is an issue that engenders strong opinions.

“This has to do with jobs, the economy, global warming, the environment and social justice,” says Stephen Randtke ’72, professor of civil engineering at the University of Kansas. “Who is getting the benefits here and how do we all get a piece? It ties into many concerns.”

Fracking is not new. For many decades, oil companies have pumped large quantities of pressurized water, sand and chemical additives into shale, tight sands or coal seam gas rock to coax oil and gas out of the fissures. Most wells are drilled vertically. But in recent years, engineers have begun drilling horizontally, often for thousands of feet. The combination of fracking and horizontal drilling permits extraction of oil and gas in areas that might have otherwise remained inaccessible. 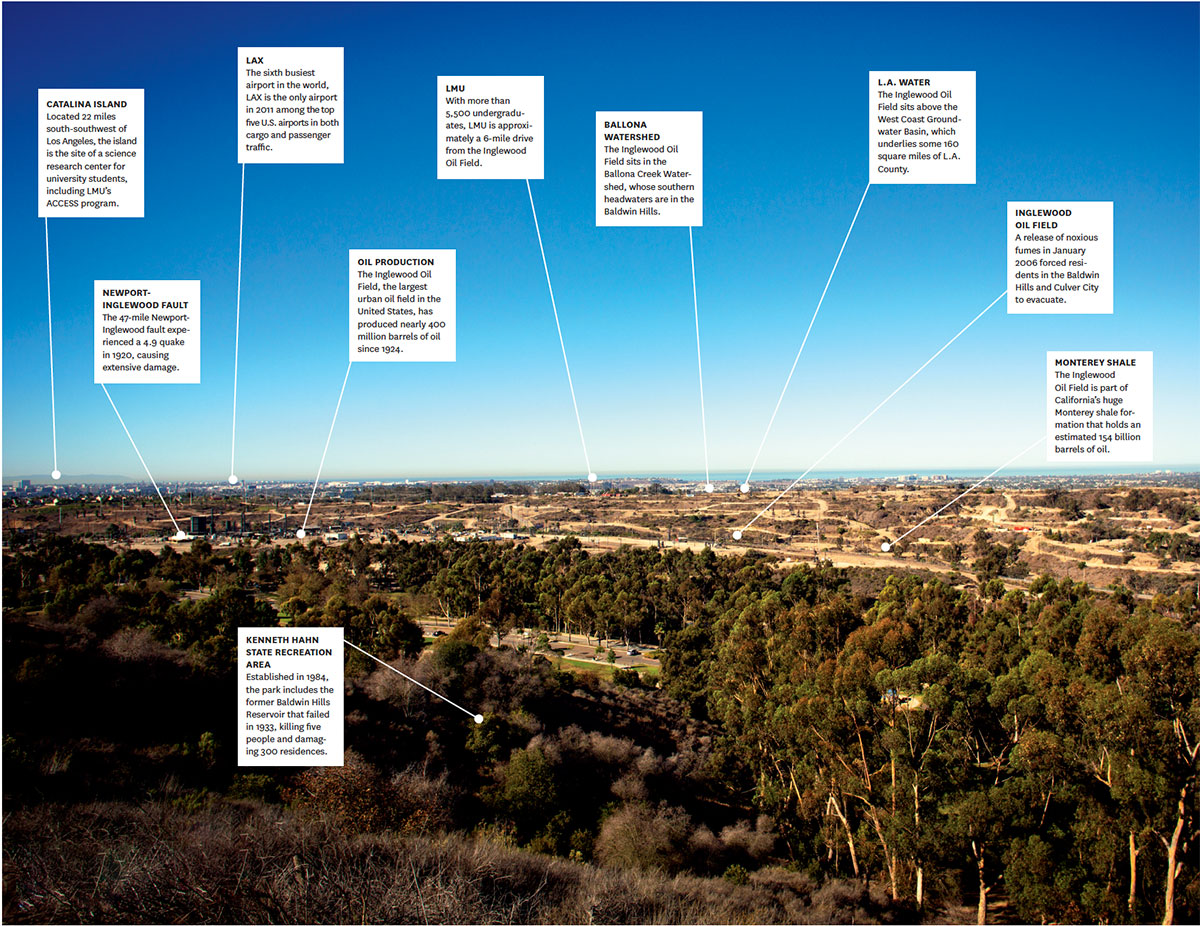 After many decades of use, operators thought any remaining oil from the 1,000-acre Inglewood field was inaccessible. However, Plains Exploration & Production Co. reactivated the field almost a decade ago, much to the concern of area residents. Shortly after the Los Angeles County Board of Supervisors certified an environmental impact report on the oil field in 2008, Culver City officials and several community and environmental organizations filed a lawsuit challenging the report.

Many environmental questions surround fracking. Some people worry the practice may cause earthquakes by causing miniscule seismic events that could trigger a chain reaction leading to significant movement. Fracking also produces wastewater, which must be safely diverted. Another concern is that sloppy drilling practices could allow methane, the central component of natural gas, to seep into the atmosphere.

“Methane, if it escapes, has 25 times the impact on global warming that carbon dioxide has,” says Randtke, who sits on the Fracking Research Advisory Panel of the U.S. Environmental Protection Agency Science Advisory Board. “How much methane do you lose when it’s coming out of the well? Right now, we’re trying to quantify that.”

The most contentious issue, however, is whether aquifers could become spoiled by the chemicals in fracking fluids. Some scientists say the distance between groundwater and where the fracking fluids are injected is sufficient to prevent contamination.

“We’ve been injecting water underground ever since oil has been produced; that’s one of the ways to get it out,” says Joe Reichenberger, professor of civil engineering and environmental science in the Frank R. Seaver College of Science and Engineering. “It depends on the geology, but drinking water contamination shouldn’t be a concern around the Baldwin Hills because the drinking water in this area comes from somewhere else.”

Much also depends on the company directing the drilling, says Brian Burnap ’12, who earned bachelor’s degrees in civil engineering and math at LMU.

“If the company is doing the well casing correctly, then the aquifer shouldn’t be impacted. But what if it doesn’t do it correctly?” says Burnap, a Houston-based consultant. “Does the company have a vested interest in the community? If it does, you get a company willing to spend the extra money to make sure the wells are cased properly so there is no seepage into groundwater. … So much depends on the situation. It depends on the company. It depends on who’s mitigating it.”

As a result of the lawsuit filed by Culver City and environmental groups, Plains Exploration & Production Co. conducted a study on safety issues surrounding fracking. Released in 2012, the report concluded that its fracking methods did not harm the environment or threaten people living nearby.

“The study has been very successful in meeting its primary goal of providing the public with scientifically based findings in a localized setting,” says a representative for Freeport-McMoRan Oil & Gas, in a statement to LMU Magazine. (Plains Exploration and Production Co. merged with Freeport-McMoRan earlier this year.) “We were sensitive to citizen concerns and sought their input before we began this comprehensive study.”

However, critics say the report is tainted because it was peer-reviewed by firms with oil-industry ties. Recently, L.A. City Council members Paul Koretz and Mike Bonin filed a motion requesting a halt to fracking in the county “until it can be assured that it’s safe for our water supply and our neighborhoods,” says David Graham-Caso, communications director and environmental policy adviser to Bonin.

“We have no appreciable regulations on fracking in our state right now,” Graham-Caso explains. “There are a tremendous number of oil wells doing traditional drilling, and every single well, we assume, has the potential to be fracked in the future. The idea of fracking is to try to bleed every drop out of the field.” 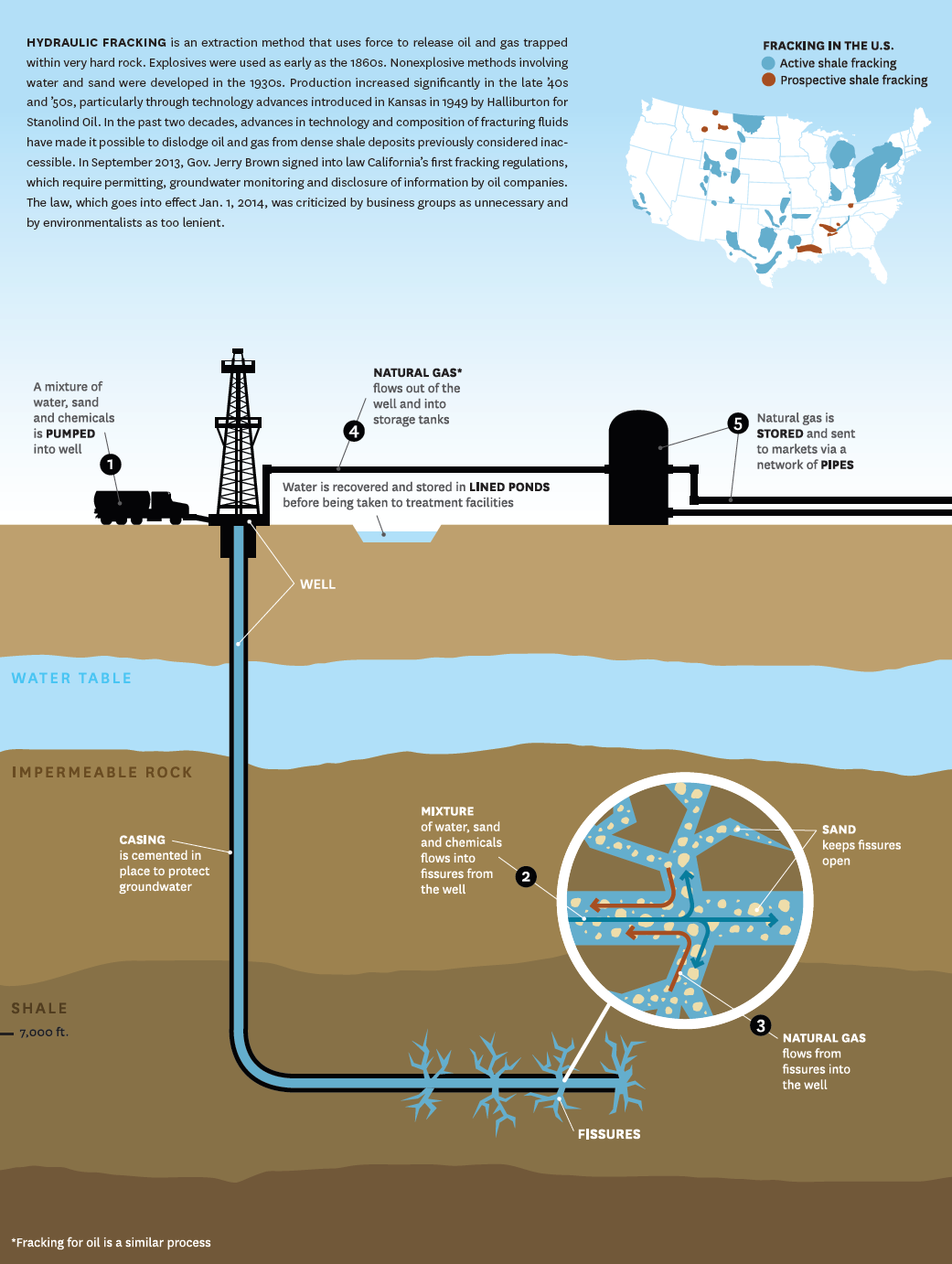 The neighbors surrounding an oil field are stakeholders and should think critically about the impact of projects that carry potential environmental risks, says Philip Chmielewski, S.J., who holds the Sir Thomas More Chair in Engineering Ethics in Seaver College.

“Has that report been assessed by competent professionals? Is there transparency?” he says. “My suggestion is for scientific truth-telling. You always check your results. Yes or no? If no, then let’s get it done.”

But the onus is on oil and gas companies to address concerns, Chmielewski argues. “Trust has to be earned,” he says. “It’s very hard for business people and professional people to earn trust, and it should be hard because they have special knowledge that’s hard to communicate to the public. But that’s their duty.”

It’s far less helpful when emotions flare between disagreeing parties, Chmielewski adds. Randtke, who lived near the Inglewood field as an undergraduate and recalls “running fraternity pledges” around its dusty trails, agrees. Some of the emotional response around fracking has to do with who is profiting, he suggests.

“A lot of this has to do with economics,” Randtke says. “If a property owner accommodates drilling and gets a check for $1 million a year, and I’m across the street with trucks going by and I’m not getting a check, I may be upset.”

During his senior year at LMU, Burnap participated in a research project studying the surface impact of fracking. That meant understanding everything from the amount of forest cleared for the wellhead to the fuel needed by trucks removing wastewater.

The study was an attempt to consider the impact of fracking aside from the narrower concerns of water contamination, methane seepage and land destabilization.

“A lot of people are focused now on water. But in order to make an educated decision, you have to look at fracking holistically,” Burnap says. “We call it cradle-to-grave impact. It’s the impact above ground and below ground and the impact away from location.”

Such a framework could be used to assess other consequences related to fracking — or any practice that has the potential to harm people or the environment, Burnap says. The conclusions of the study? The surface impact of fracking was not as severe as many environmentalists suggested and worse than many oil and gas companies contended. “We were treading the line between the environmental and oil groups,” he says. “We were able to say to both camps ‘You’re both off.’ Now we can put the results forth in the public realm for the debate to happen. This provides information to the public so it can make an informed decision.”

But the young engineer doubts that many people are interested in such a neutral, thorough and, yes, rational assessment.

“It’s the kind of framework that should at least be considered,” he says. “The trick is the competing interests. You have to find someone [to do the research] who doesn’t have vested interests — which is really hard to do.”