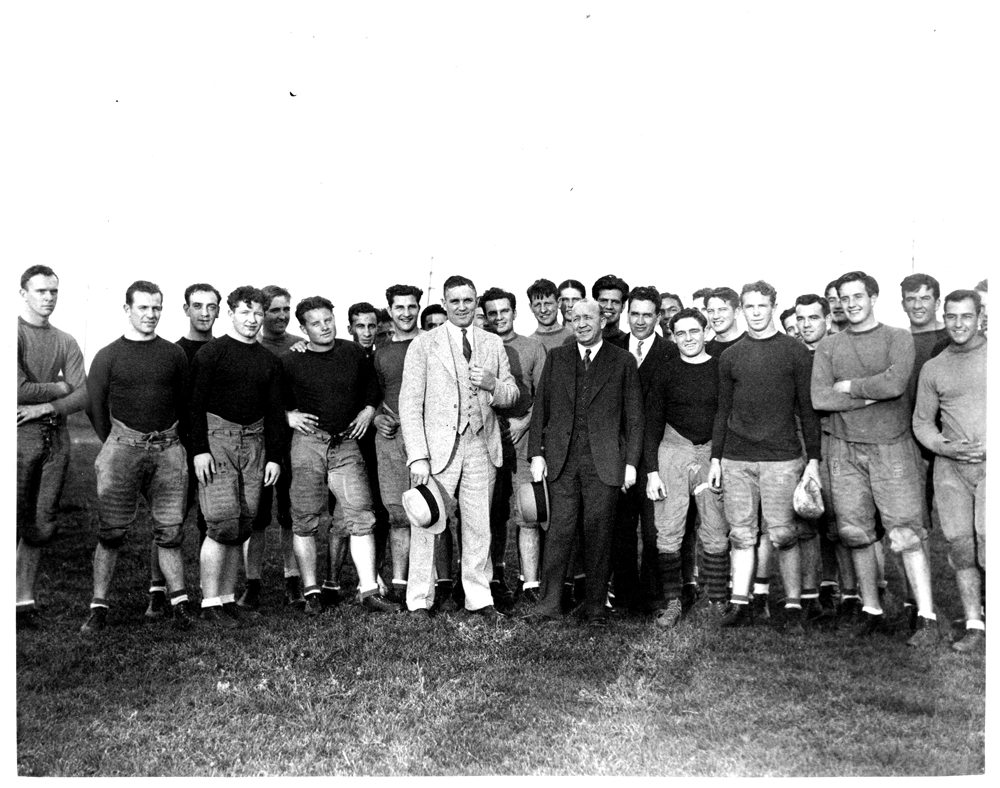 There were neighborhoods in this country in the ’50s and ’60s where no one’s kids went to Notre Dame University, yet, it seemed, everybody rooted for the Irish. Mine was one.

In my Irish Catholic Philadelphia parish, you’d think we had produced more Domers than priests. But here’s the score on that point, as best as I recall: Priests-4, ND alums-0. That may have been the only Irish loss that didn’t stick in the craw of my aunts, uncles and friends at St. Anne’s.

I’m not sure things have changed much in some Catholic circles. My brothers and sisters, for example, proudly carry the ND flag. Notre Dame still is the elephant in the sanctuary — the loudest Irishman in the pub, perhaps — and that goes far beyond athletics. Notre Dame has become one of the nation’s top-flight universities. As recently as 1960, perhaps no Catholic college could make that claim. I’m not the only education professional who confronts a problem and thinks, “I wonder how they deal with this at Notre Dame?” And as editor of LMU Magazine, I’ll confess that I read ND’s university magazine not to learn what my peer, Kerry Temple, is doing but simply because I like it.

I no longer live in my Irish Catholic shtetl. Here in Westchester, I’ve been intrigued to see connections between Notre Dame and LMU, not least because they involve the legendary Knute Rockne. The Rock went to college — Notre Dame, of course — with one of our own legendary football coaches, Tom Lieb. Later, Lieb became Rockne’s assistant coach. Knute also visited our campus and was photographed at Sullivan Field (Rockne is in the dark suit in the photo above, with Lieb in the light suit). In 1931, scenes from “The Spirit of Notre Dame,” the first Knute Rockne film, were shot on Sullivan Field. Last, Rockne himself was once offered the title Head Football Coach, Loyola University. He turned it down.

In a few days — Sunday, Sept. 12, at 11 a.m. — Notre Dame and LMU paths will cross again. They also crossed memorably last December when our men’s basketball came home from South Bend with an 87-85 victory at the Joyce Center (just thought that was worth mentioning). This time, Notre Dame’s women’s soccer team will arrive at fabled Sullivan Field to play our women’s team. Last year, the Irish advanced to the NCAA semi-finals, losing 1-0 to the eventual champion, North Carolina. They’re an excellent team this year, too, one well worth seeing.

But sometimes a line must be drawn. When one of your “cousins” goes up against an outsider, you get behind your cousin, no questions asked. When your cousin comes to your house, or field — well, choices must be made. In fact, that’s what I plan to tell my four nephews and one niece who are Fighting Irish alumni. They didn’t grow up in the old neighborhood, so they may not know the rules. And I have no choice but to tell it to my own sister, who just happens to work at Notre Dame University and who just happens to be a nun. She knows the rules.

My relatives can’t make the game (“We will fight in every game,” green blood in the veins — I’m a little disappointed; I’m just sayin’ …). But you can bet there will be a lot of people wearing green and making noise in the Sullivan Field stands that day. In fact, the Notre Dame Club of Los Angeles has sent an e-mail blast to its membership encouraging them to support their team — yes, I’ve seen the e-mail. Let’s make the visitors feel welcome, truly welcome. But let’s remind them: We’re welcoming them to the Lion’s Den.

If you know about other LMU-Notre Dame connections, please share them in the Comments section below.