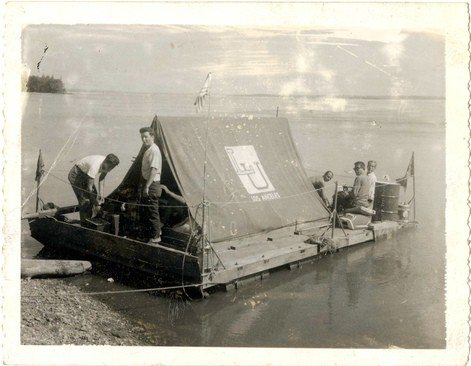 We learned this week that freelance writer Sandra Millers Younger hauled in an award for LMU Magazine on the strength of her writing. Younger wrote “Operation Huck Finn,” a feature in our fall 2013 issue about a group of students who in 1959 reenacted Huck Finn’s fictional trip down the Mississippi River in Mark Twain’s “The Adventures of Huckleberry Finn.”

Younger received the bronze award for Best Article of the Year in the 2015 CASE District VII Circle of Excellence Awards. CASE (Council for the Advancement and Support of Education) is an international association of educational institutions. District VII is the region that includes institutions from Arizona, California, Guam, Hawaii, Nevada, the Northern Mariana Islands, and Utah.

Part of the story’s attraction, simply as an idea, was the familiarity of its subject matter: Alumni who studied American literature at any point in the past six decades probably read the novel. If they hadn’t, then they probably did in high school. Also, there’s something impulsive about the trip, which likely arose out of the same spirit that makes it hard to resist perfect pranks. Combine that with the students’ meticulous commitment to detail needed to actually plan and organize the trip, and you have a story with timeless appeal and several very sharp hooks.

Younger’s treatment impressed me as soon as I read her draft. Its tone was comfortably both light-hearted and serious, a balance I find very difficult to achieve. She captured the students’ adventurousness: A charismatic professor sought volunteers for a ludicrous idea, and six students raised their hands. How many parents lost sleep during that journey? Also, the group included a Mexican American, Carlos Salazar, and a Japanese American, Alan Kumamoto, both in the class of 1962, and Younger conveyed the undertone of racial tension that they sensed while traveling through some parts of Missouri. Best of all, she introduced into her text short segments of Twain’s novel — Huck’s comments — that helped frame the August 1959 journey. Here’s my favorite:

“It would a been a miserable business to have any unfriendliness on the raft; for what you want, above all things, on a raft, is for everybody to be satisfied, and feel right and kind towards the others.”

I thought that was brilliantly used. Thanks, and congratulations, to Sandra Millers Younger.