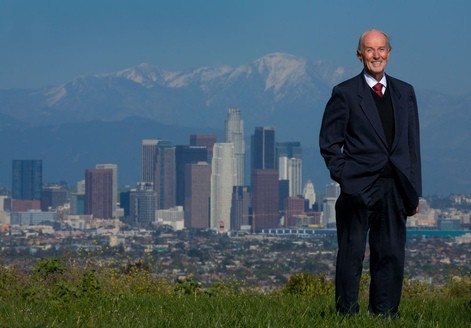 Today marked the passing of one of the most gracious public figures I have ever met: Stan Chambers. Over the course of six decades, Chambers become a symbol of the news business at its best as well as one of its most admired reporters.

Chambers attended Loyola University for three years and was part of the Air Force ROTC detachment before being instructed to transfer to USC for special courses. In 2008, after his book, “KTLA’s News at 10,” was published, I interviewed Chambers for the summer 2008 issue of the university’s magazine, then known as Vistas. I don’t think I have ever interviewed a more gracious and welcoming person. I met him in the KTLA studios, and he made me feel like I was an honored guest that day. Few people had Stan’s generosity of spirit.

When Maureen Pacino ’93, Glenn Cratty, then the university photographer, and I sat down to conceptualize a photo, we knew we wanted to avoid the predictable environs of a TV studio. Glenn said, “I know just the place: Kenneth Hahn State Recreation Area. There’s a great view of the skyline from there.” We asked, “How do you know?” Glenn, who now shoots in Colorado, used to scout L.A. in his free time, to build up in his brain a collection of visual backdrops for occasions like this. So we asked Stan to meet us there.

On a blustery afternoon, Stan drove up with his wife, Gege. We asked him to pose in the grass, near the edge of a hillside. The winds were strong enough that all four of us grew colder as the shoot wore on. As you may expect, Stan never complained, though I believe he felt the coldest of all. The shot we came away with is here. What you cannot see is that just to Stan’s left is Maureen on a small ladder directing a portable light on Stan. I’m a foot or two from her, chatting with Stan and trying my best to make the afternoon somewhat pleasurable for him. And Glenn is sprawled on his belly in the grass, some 70 feet away, with a telephoto lens, yelling his instructions to all in a voice loud enough to be heard above the wind. Gege wisely and warmly stayed in the car.

Stan later said that he liked the interview and especially loved the photo. He particularly appreciated that Glenn positioned him so that the tower of City Hall appears just by his right elbow. One of his strongest memories of the L.A. skyline is of how it looked before skyscrapers defined it. City Hall had always been an iconic symbol of Los Angeles to Stan Chambers.