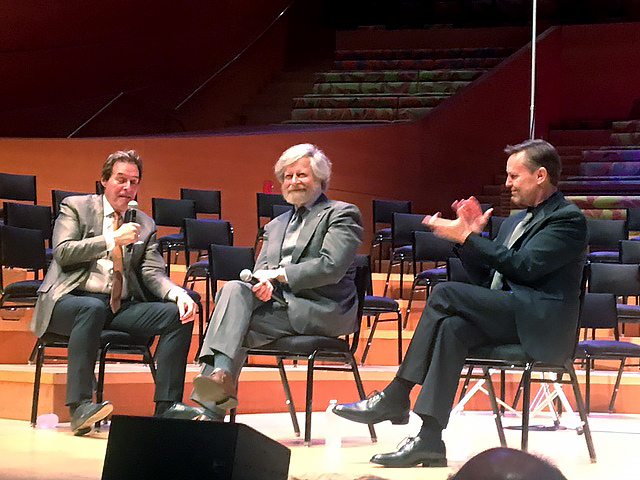 KUSC classical music DJ Alan Chapman, Morten Lauridsen and Los Angeles Master Chorale Artistic Director and Conductor Grant Gershon discuss Lauridsen’s landmark choral piece “Lux Aeterna,” as well as Paul Salamunovich’s role in the development of the composition, at the 20th anniversary celebration of the work at Walt Disney Concert Hall June 17, 2017.
Twenty years ago, Morten Lauridsen premiered his “Lux Aeterna,” a choral piece that was performed by the Los Angeles Master Chorale under the direction of Paul Salamunovich, who was also professor and director of choral activities at LMU. The event is looked upon as a landmark in choral music, as is the composition. The piece is performed all over the world, and Lauridsen himself is known around the globe for this and other works. About 10 days ago, Lauridsen joined the chorale at the Walt Disney Concert Hall as part of a weeklong celebration of his masterwork. The chorale’s recording of “Lux Aeterna” further cemented the group’s stature on the global map of choral music, and it’s safe to say that in the singers’ eyes and those of many others, the L.A. Master Chorale “owns” that piece of music. So the excitement of the day was almost palpable: Together in one place were the piece, the composer, and the chorale. The last link in this momentous chain was the audience, who were gathered not because they had nothing to do on that Saturday afternoon or showed up simply to fill the seats they’d purchased in their season ticket package; no, they had come to Disney Hall because they knew the work and were present to hear exactly that. The atmosphere also was charged because on the program were two world premieres — “In Gratitude,” by Los Angles jazz and classical composer Billy Childs and “Time in Our Voices,” by Moira Smiley — as well as a West Coast premiere of Eric Whitacre’s “I Fall.” Work by Childs, Whitacre and Smiley was especially appropriate because they had befriended or studied with Lauridsen. It seemed to me that this day, too, would go down in the history book of L.A.’s choral music tradition. One of the “extras” of the day was a pre-concert conversation that took place with Grant Gershon, artistic director of the chorale, Alan Chapman, a DJ with KUSC, and the composer himself. Lauridsen spoke at length about his close collaboration with Salamunovich. In his 2015 article for LMU Magazine, Lauridsen described his weekly meetings with Salamunovich to go over compositions. They worked on several pieces together including Lauridsen’s “O Magnum Mysterium.” Paul was expert in sacred Latin liturgy, and Lauridsen composed “Lux Aeterna” inspired by the idea of light—illumination. His mother was dying at the time, he told the Disney Hall audience, and he wanted to compose a piece that would be a source of consolation to himself and others. Consisting of five movements, the piece is, in part, a collection of prayers. Some years later, Lauridsen told the Disney Hall audience, he visited Salamunovich when the conductor was on his deathbed. He softly sang the melody to his friend, who, although mostly motionless, moved his hand in time with the music, perhaps conducting “Lux Aeterna” for the final time. I attended the event, you could say, because in 2008 I wrote a story about Donald Nores ’52, a businessman and entrepreneur in the Los Angeles area who passed away in June 2016. Nores was a great lover of choral music. Near the end of our phone conversation, I asked, “I’m interested in choral music, but I know nothing about it. Where should I start?” He replied, “Go get the L.A. Master Chorale’s recording of Morten Lauridsen’s ‘Lux Aeterna’ conducted by LMU’s own Paul Salamunovich.” I did so, and I continue to dive down into choral music. Nores was a member of the Board of Directors of the master chorale, and he supported several LMU programs, including the College of Communication and Fine Arts choral music program. He also was a donor to the Paul Salamunovich and Nanette Salamunovich Goodman Choral Music Scholarship, which continues to benefit students in LMU’s choral music program. Salamunovich’s legacy, then, lives on at LMU. In an odd and wonderful way, I can say that I’m a beneficiary, too.