Detained then turned away at the New York Harbor, a Jewish farming family later slips across the U.S.-Canada border and gives life to five generations of Americans. 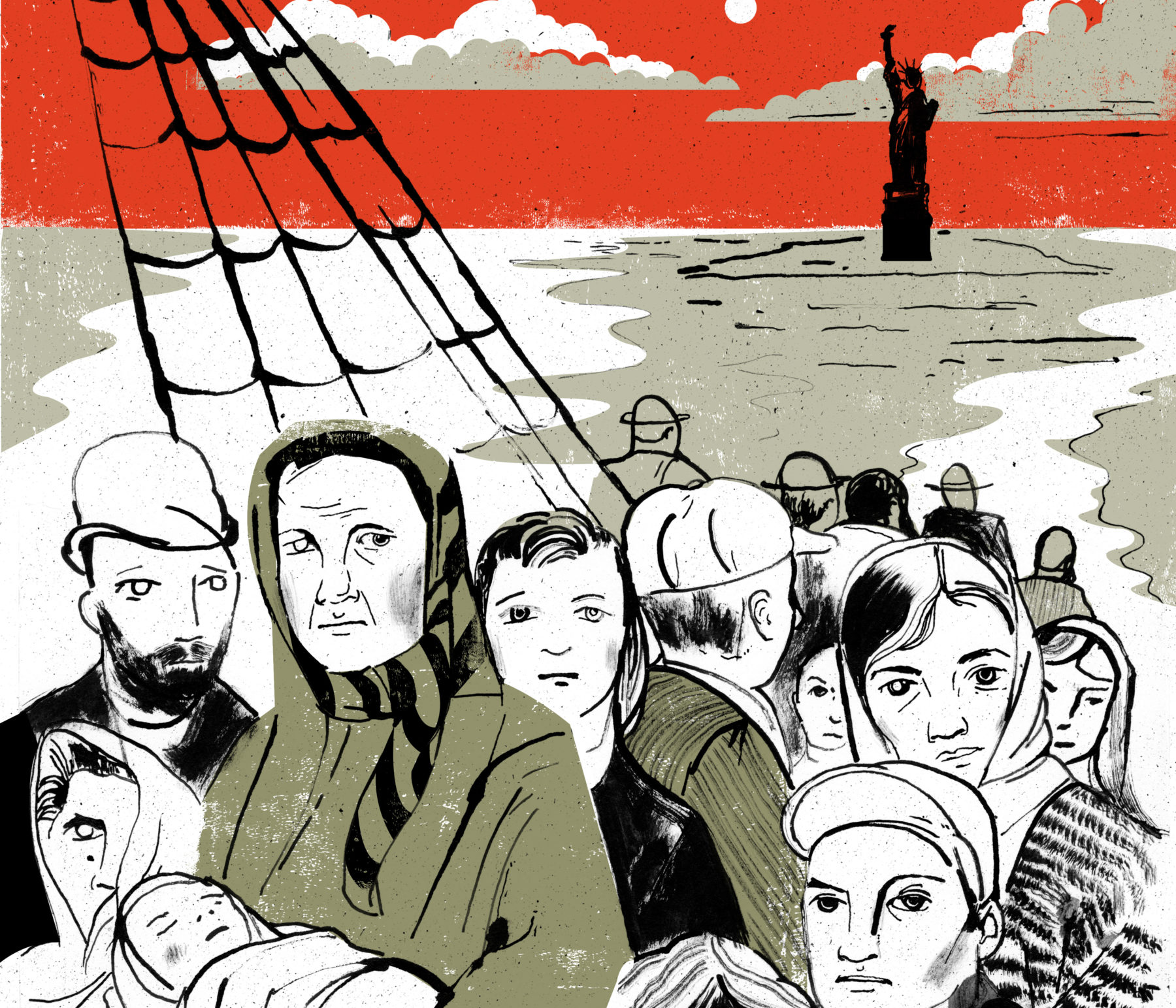 My Grandma Ruth was born at the turn of the last century, somewhere along the border between Austria-Hungary and Romania. She couldn’t, however, be certain which side. In her words, “Depended which way that day the wind was blowing.”

What is certain is that my great grandparents, Moses and Sarah Abromowitz, like all new parents, dreamed that their child would go farther, accomplish more and do better in the world than they had. Theirs was not an easy life. Not a prosperous one. They were farmers, living off the land.

And anti-Semitism was rearing its ugly head all around them.

In Romania, legislation depriving Jewish children of their right to attend public schools was amended in 1889 to exclude Jews from secondary schools and universities. In Austria-Hungary, the powerful Catholic People’s Party declared liberalism and socialism destructive to Christian values, pinpointing Jewish journalists and intellectuals as the primary culprits. In both countries, propagandists promoted conspiracy theories alleging that Jewish bankers controlled the economy and thus were responsible for oppression of the working class and uneducated. Violence against Jews escalated in the cities, and proposed laws gained traction restricting Jews from owning land. Throughout Eastern Europe, pogroms were on the rise, Jewish-owned businesses and properties destroyed, death tolls mounting.

It was time for Moses and Sarah to leave the encroaching darkness, find a safer place to live, thrive and worship, a more welcoming place to raise little Ruth and, God willing, siblings yet to be conceived.

I have often imagined how arduous the journey must have been: carrying a whiny toddler in arms; carting bags filled with personal belongings and family heirlooms; trekking through Austria-Hungary, Germany and the Netherlands; boarding a ship packed with refugees in Rotterdam to cross the stormy Atlantic. Yet, they were driven by great expectations, as much as by hardship.

Only to discover the doorway to the American dream closed to them.

Due to shallow waters surrounding Ellis Island, transatlantic ships docked at the ports of lower Manhattan. After brief inspections, refugees with sponsors, work credentials or enough currency to bribe corrupt officials were given entry. Not so for steerage passengers, the Abromowitz family among them. Herded onto ferries, shuttled to the island, funneled into the Great Hall for further processing, their already grueling voyage took an unexpected turn for the worse.

Herded onto ferries, shuttled to the island, funneled into the Great Hall for further processing, their already grueling voyage took an unexpected turn for the worse.

Having sustained themselves by farming, they were, by most definitions in the old country, peasants. Coupled with the lack of sponsorship and depleted funds, they had no obvious marketable skills for employment in America’s eastern cities, where the waves of new immigrants were clustering in ghettos. Adding to the dilemma was that they spoke only Yiddish and were unable to pass even the most elementary of English language literacy tests. Marked with chalk, Moses, Sarah and Ruth were labeled “paupers,” burdens to society, and sent to a detention center with the other undesirables awaiting deportation back to Europe.

Their dream had become a nightmare.

Our northern neighbor’s border was open to refugees with agricultural backgrounds. It wasn’t because Canada was more progressive or empathetic. Rather, Canada was looking to populate its vast interior with refugees, despite the fact that Native peoples were already living there. Immigrants refused entry by U.S. Customs could apply for transport to Canada, and the United States complied. It was, after all, a lot more cost-efficient than shipping so-called vagabonds across the Atlantic and back to Europe. Not everyone was happy with this arrangement. According to the House of Representatives’ Select Committee on Immigration, the grants weren’t well regulated, and Canada had become “the back door for illegal entry into our country.”

Removal from detention and passage to Canada went relatively smoothly, as did their relocation to Manitoba. But the American ideal still loomed in their minds, and there was talk among fellow travelers that a Lithuanian rabbi, having immigrated to North Dakota, had set up a shul in a town called Grand Forks, 80 miles south of the Canadian border. With seed money from a benefactor, land was acquired for Jewish homesteaders to plant roots, free of charge.

As part of a cooperative 60 or so members strong, Moses and Sarah farmed, traded with nearby tribes, sold goods at local markets, worshipped, learned English and had two more babies. They were productive. Contributed to the fabric of society. Became American citizens.

But while appreciative of their freedom, they found that the opportunities they dreamed of for their children were limited. So, they moved again. This time for the last time, 300 miles away, to a burgeoning city with a vibrant Jewish population. To Minneapolis, Minnesota.

You see, that’s the thing about immigration: It’s not just about those who’ve taken the journey, profoundly crucial as it may be. It’s what it begats.

If Moses’, Sarah’s and Ruth’s rejection at the U.S. border and involuntary relocation back to Eastern Europe had gone through, and if they had managed to survive World War I, they would have surely perished just years later with the 6 million Jews murdered in the Holocaust. My grandmother Ruth would never have met my grandfather, Nathan Menins, in Minneapolis and given birth to my mother, Nancy, who would never have met Howard Schwartz, my father, after he returned home from World War II.

Simply put, I would not exist. Nor would the three remarkable children I raised with my beautiful wife. Or my brother and his two adult children. Or many of my aunts, uncles, cousins.

And unwritten and unread would be my chapter in this never-ending story.

Mark Evan Schwartz is associate professor of screenwriting in the LMU School of Film and Television. An award-winning screenwriter, he has credits on more than a dozen produced feature films, television shows and television movies.