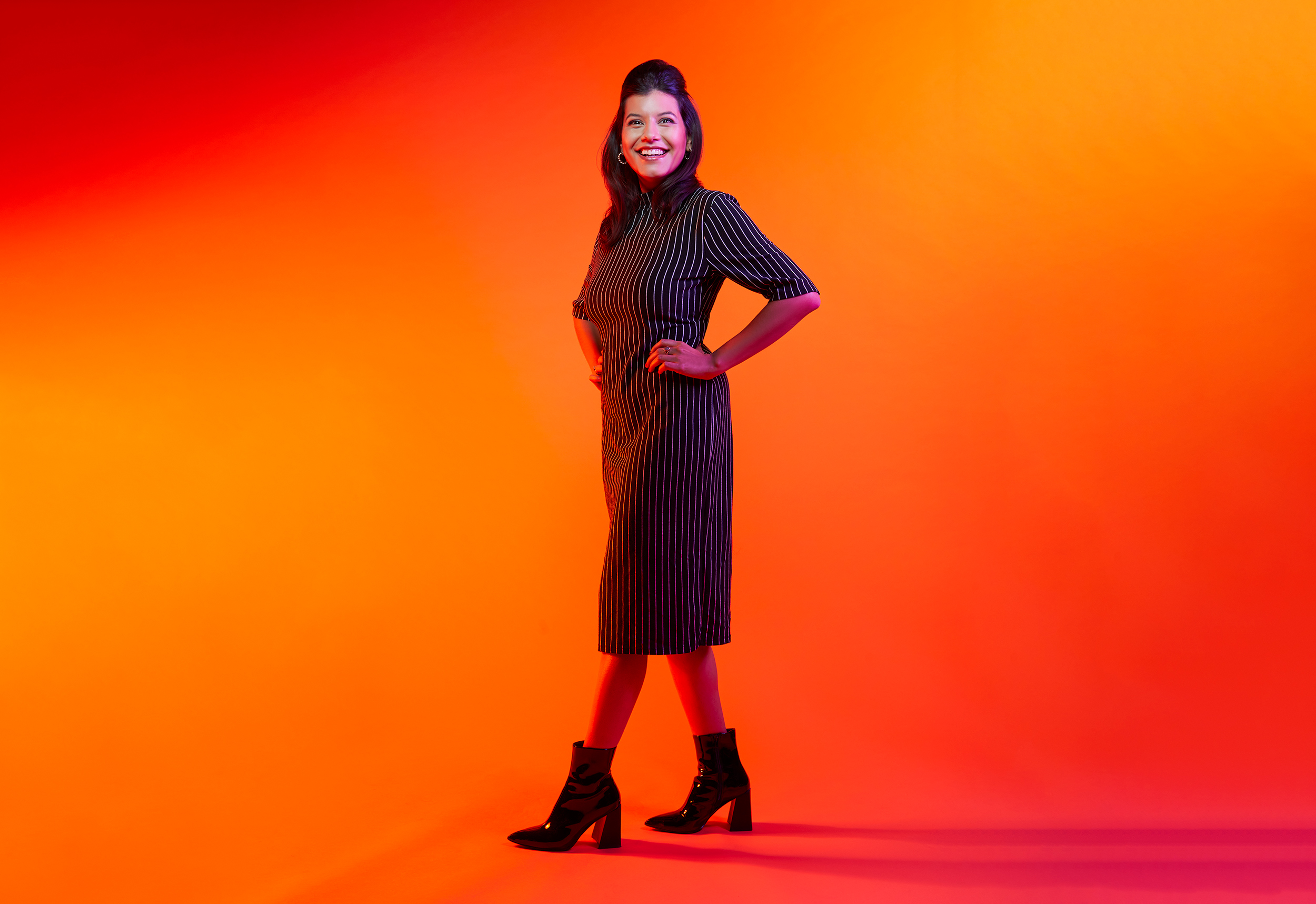 The second thing Mukta Mohan applied for at LMU was a show at KXLU. The first, her admission application, got her accepted. Once on campus, she dove deep in the station’s music vault, becoming program director, and also learned politics through campus activism and working with the Thomas and Dorothy Leavey Center for the Study of Los Angeles. Now, Mohan has joined her devotion to audio media and her commitment to politics. She’s vice president at Higher Ground Audio, the podcast division of Higher Ground Productions, a media company founded by former President Barack Obama and Michelle Obama. Mohan was the executive producer for “Renegades: Born in the USA,” a podcast featuring a series of conversations between President Obama and Bruce Springsteen. Along the way she developed news shows and executive produced podcasts, for MTV News and Crooked Media. Mohan was interviewed by Evelyn McDonnell, professor of journalism and new media and author of “Women Who Rock: Bessie to Beyonce. Girl Groups to Riot Grrrl.”

What was your role in “Renegades: Born in the USA”?

We’re a small team at Higher Ground Audio. There are four of us, but we worked with a great independent podcast production company called Dustlight. Together, we narrowed down topics and conversation themes that we thought would be interesting to flesh out over the course of eight episodes. President Obama actually chose Bruce Springsteen as his conversation partner because of the friendship they have. We filtered through hours and hours of tape, picking out the moments that we felt listeners would connect with the most. Then, we figured out the sonic landscape that all of this lives in — layering in music. There were hours and hours of listening to rounds of edits, finally landing on the finished product.

I feel they both said things that I’ve never heard either of them say. Obama pushed Springsteen on race in a way that no one has.

It was incredible to hear both of them press each other and open up. They were able to challenge each other in a way that only genuine friends can, because there’s no judgment there. I felt Bruce’s vulnerability got the president to open up in a way that we haven’t seen since his memoir, “Dreams From My Father.”

What’s so interesting about podcasts is their intimacy. They’re conversations, even though they are edited.

The intimacy of podcasting is my favorite part of the medium. It’s almost as if you have friends in the room, people who are sparking ideas and inspiring you to question your own ideas.

What is the goal of Higher Ground Productions? Is there something that they and you feel is needed in the podcast world?

President Obama and Michelle Obama started Higher Ground Productions as an extension of their own set of values. They are storytellers, and it was a natural next step for them to release film, TV and now podcasts as a way to continue amplifying the stories that deserve to be told and listened to. Everything that we do aligns with the Obamas’ value set, which is taking the long view of history, taking the high road, being hopeful and optimistic, engaging with your community, and amplifying diverse stories.

Is all of that close to your heart?

Absolutely, this is a dream. Ten years ago, I could have never imagined that this would even be a job to aspire to. The fact that there can be mission-driven work within it is the perfect mix of everything that I value and love.

Can you describe the grounding that led you to this point?

I grew up in Orange County, California, and my parents are both immigrants. My dad came from India. My mom came from Mexico. Both landed here in the ’80s and met because they were neighbors in Santa Ana. My mom was a preschool teacher’s assistant. That was her way of ensuring that I could get a private school education. I think my dad offered my mom a ride to work one day, and it went from there. So, I come from an immigrant household with two completely different languages, different foods, different cultures. The Orange County that I’m from is not the OC that most people are familiar with. I grew up right next to Little Saigon, near Westminster. There was a fusion of cultures.

What languages were spoken in your house growing up?

Mostly English and Spanish, a little bit of Hindi. My mom only speaks to me in Spanish still.

It definitely was a fusion. At Thanksgiving dinners, we’d have Mexican food, Indian food and a turkey. It’s funny: Now I’m grateful for that, but I remember being sad as a kid that I didn’t have all American kinds of traditional food.

Did you experience racism?

I definitely was well aware of that. Microaggressions were common.

When did you start getting into music?

When I was a little kid, I loved the Beatles, the Beach Boys and ’60s girl groups. I still love girl groups. As I got to middle school, my tastes changed, and I started listening to KROQ. But it was really when I was 14 that I started discovering independent music that was made by people my age or slightly older than me in my own neighborhoods. I had a friend who was a student at the University of California, Irvine, and she had a radio show on KUCI. She invited me to be a guest DJ. It was the most exciting feeling ever to be on the radio. That was the moment I decided I wanted to do college radio. KXLU was actually a pretty big decision factor for wanting to go to LMU. I already loved listening to the station; it was the coolest station. I remember getting my acceptance letter and the next day emailing the general manager of KXLU and asking, “I’m an incoming freshman, how can I have a radio show?”

I’m noticing a trend here, that when you want something, you don’t hesitate: You send an email. Is that how you got the Higher Ground job and the Crooked Media job?

It’s very serendipitous how everything panned out. I got my job at Higher Ground Audio because my boss and I had worked together previously at MTV News. When he got the job as head of Higher Ground Audio, he called me up because he was building out a team. My experience at Crooked Media had given me all the skills that I needed to be able to take this on. I was developing new shows, executive producing podcasts and thinking holistically about building a network. Those were the kinds of skills that I needed at Higher Ground.

When I was at LMU, I didn’t realize that I was building that foundation. I was at KXLU, and I also worked at the Center for the Study of Los Angeles, working on research around local elections, learning a lot about local policy, being around conversations about politics, leadership, how change happens and how people engage in their communities. At the time, I thought it was one or the other: work in music and radio, or work in politics. I didn’t see a way for all of my interests to connect.

Working for women has also been very important in your work and activism, and, of course, now you’re working with Michelle Obama, and that is a very woman-powered podcast.

That’s a common thread in my life. I like to be inspired by hearing about how other women live and make their lives. Something that’s really important to us at Higher Ground is providing opportunities and bringing other people up. For Mrs. Obama’s podcast, every single episode started with an up-and-coming female artist.

Do you have any podcasts that you’re trying to develop?

I have a lot. I’m just not allowed to talk about them. I’m working on many things that I’m very excited about right now, that reflect the values of the company and tell stories that I really believe in and have been wanting to tell for many years.

What advice do you have for students who are graduating now?

My advice would be to follow your enthusiasm and to find the things that really awaken you and make you excited. Do whatever you can to get involved in those spaces, whether that’s volunteering doing internships or not being afraid to start in entry-level positions. Collaborate with friends and do the things that make you feel alive and give you a sense of fulfillment. The perfect dream job may not exist yet, but as long as you’re following your passions and are working on the things that inspire you, I do believe that everything will fall into place. I had no roadmap. I just followed the things that made me excited.

On Being with Krista Tippett

This gentle and thought-provoking podcast sits at the intersection of spiritual inquiry, science, social healing and the arts. The show explores the meaning of life with some of the leading thinkers of our time.

This daily podcast offers a much-needed spark of curiosity and wonder as every episode takes listeners on a journey to explore the world’s most unexpected and surprising places.

It’s hard to keep up with the news when there’s so much going on! The Daily from The New York Times makes it easy by going deep on one of the biggest news items of each day. The show is accessible and short, and keeps listeners informed.

Jenna Wortham and Wesley Morris discuss and analyze culture in the broadest sense. They have great chemistry and offer thoughtful and engaging commentary on everything from celebrity apologies to confronting the use of the N-word in entertainment.

Conversations about money can get messy! Hosted by Reema Khrais, This is Uncomfortable, from Marketplace, digs into the ways that money affects relationships and shapes identities, highlighting individual stories of people dealing with impacts and repercussions of having or not having money.

After being cooped up inside for so long, we can all use a little bit of an escape. Far Flung journeys across the globe and brings the ideas that shape each location to life through reported pieces from local journalists and creators.

Best friends Aminatou Sow and Ann Friedman live on opposite sides of the country but the distance doesn’t keep them apart. Each week, they call each other to discuss current events, culture and what’s on their minds.

Host Mike Duncan goes deep, like 50 episodes deep, on the revolutions that defined society and altered the course of history. This no-frills, direct-to-listener podcast is perfect for history buffs. Bonus: Before this, Mike started out with the 179-episode podcast “The History of Rome,” which covers exactly what you think it does

This radio play from the Public Theater and WNYC is a Baz Luhrmann-style adaptation of Romeo and Juliet performed entirely in Spanglish. Alternating seamlessly between English and Spanish, this podcast offers a fun and modern take on a classic. To top it off, Julieta is played by Lupita N’yongo.

Walter Thompson-Hernández grew up in Los Angeles, and this podcast is his love letter to California. In each episode, he explores a key part of his hometown through conversations with friends, family and his community. This show is gorgeous and carries a strong sense of place that anyone who loves the city can appreciate.