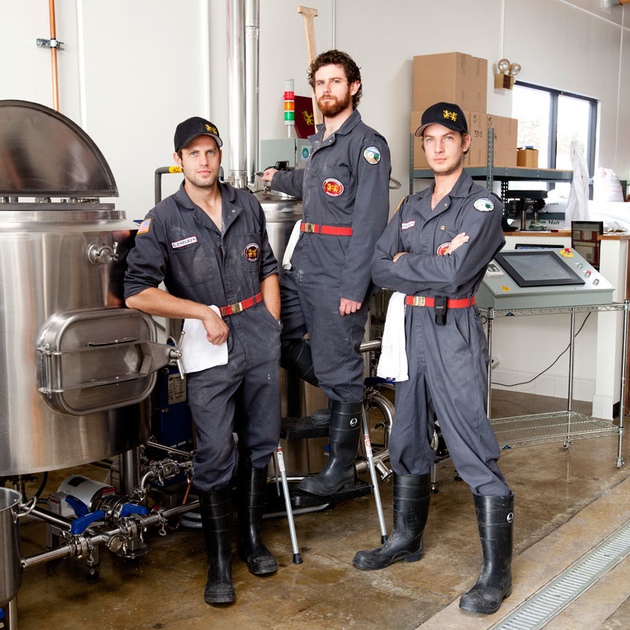 When did you make your first brew?
The first time was in the Loyola Apartments during my sophomore year. One of my friends had a little stovetop. We bought a kit and fermented it there. The following year, I moved off campus, and we set it up in the garage. Matt started at LMU that year, so we started brewing more and more on the weekends. The next year I moved into a condo, and we had to move the brewery. So Joe, who I played lacrosse with, said we could put it in the garage at his place. It was a little 10-gallon setup, and every weekend we were at Joe’s, brewing.

Was the first batch any good?
We made an amber beer, and it was really watered down.

So how did you get the taste right?
It’s a huge learning process. After we got more experience with brewing, we automated a lot of the process. We knew our beer wasn’t that great, so we entered home-brewing contests, and we’d get full write-ups from the judges. They would say, ‘This beer has this flavor, this flaw, and so on,’ and we’d look at those comments and see what we could fix by changing the process or the ingredients. We’d redo our batches and submit them again. In college our success rate was about 50 percent; soon we were getting every batch to come out like the recipe called for.

When did you realize it could be a business?
That was when we started doing seasonal parties in our backyard, and we did one at LMU in The Loft. We’d plan out a flight of beers — a pilsner, a brown ale, etc. — from lightest to darkest. One night, while getting ready for one of these parties, Matt and I were sitting the kitchen with 50 gallons of beer kegged up, and I was freaking out that we didn’t have enough. And we’re sitting there worrying about the details, and we said to each other, “What are we doing? Maybe we should start thinking about a business.”

What beers are you making?
We’re making two kinds: an altbier, which means old-style beer in German, and an IPA, or India pale ale. Matt and I went to Germany and tried a lot of the beers, then came back and decided to try to adapt that style and make a California alt-style beer. Our India pale ale is an imperial style, a little bumped up in alcohol content. We wanted to have a ‘hoppy beer’ and a ‘malty beer.’ We want to get a third beer in here, too.

Do you think the microbrewery business is saturated?
As more breweries come into an area, the craft beer scene grows with it. And as it grows, you get more people. I wouldn’t say the market is saturated. Up here [in Ventura County], there are only a couple of breweries that are selling to bars, so this area is wide open.

Is there a secret to your recipe?
I have to say the uniforms, our “brewniforms.”

I guess the secret is cleanliness and having control over every single step in the process. All the recipes we’re making now are home-brew recipes that we’ve brewed over and over again. We’re using top-of-the-line ingredients and not using fillers like big breweries do — straight-up honest ingredients, high in quality, every step of the way.

What role do each of you play in the process?
I’m the “captain of operations,” which would translate into president or CEO. Matt is “commander of finance” — basically the CFO and the accountant. He takes care of all the money, invoices, sales, etc. Joe handles our marketing. Aside from that, his title is “brew chief.” We each have a different expertise, even different majors — engineering, accounting and finance, and marketing. You really can’t get a better business crew than that.

Where does the two-griffin logo come from?
I have always liked those old, medieval shields with the beasts on them, and I’m a big fan of that classic-style art. I wanted that antiquity look. Then we saw that there are two symbols of hard work: a high-five and the toast “cheers.” We wanted the beer to symbolize a reward and something special. So we came up with the griffins doing a high-five and a toast.

Is there anything else you want to say about the beer or the process?
Just, let’s try one.