At twelve o’clock the campus mall began
to fill with students freed from morning class,
now looking for some shade, a bite to eat
and, with some luck, a date for Friday night.
The crowd, all dressed in summer styles, at first
ignored, but couldn’t miss, the bundled man
who wandered past. He pulled his ski cap tight
over his ears, and kept his coat, complete
with gloves, clutched round him. From his collar burst
a turtleneck. His eyes, like blue stained glass,
pierced sadly from a face mime-painted white.
A show! Folks watched in obvious delight.

Some thirty yards down-mall across the grass,
a second “mime” (though he could speak) let out
a cry, “The North Wind and the Sun!”
The “Wind” and “Sun” approached (more mimes): the Wind
in blue coat and bright yellow muffler, graced
each side by “breezes”—girls with icy sass
and pale blue capes, whose flowing hair was pinned
behind in scarves; and seemingly more fun,
the Sun in shorts, Hawaiian shirt, smile braced
by bright-orange beard and hair, and ringed about
by “sunbeams”—each a beach-clad lad or lass,
blowing kisses as kids moved to let them pass.

“I’m stronger,” cried the Wind. He tossed his head
and threw his muffler back with reckless charm.
“You’re not,” the Sun retorted. “You’re plain nuts!
Of course, I mean that in the nicest way.”
He broadly smiled. “Well, I propose a test.
You see that traveler there?” He waved an arm
to designate the bundled man. “Instead
of pointless boasting, let’s prove what we say.
Whoever strips the coat off of his chest
is stronger.” “I’ll win; no ifs, ands or buts,”
the Wind proclaimed. “Go, hotshot, get your rest.
You’ve got no chance; I’ll show you who is best.”

The crowd began to whoop and cheer, as each
observer picked a side. The Wind drew back,
then doubled forward, blowing with all his might,
then blew again. His “breezes” hurried up
and yanked and tugged the traveler’s clothes, but he
just clenched them tighter, struggling to wrench free,
and finally pulled away. The Wind went slack,
stepped back and gasped for air. He tried to cup
his hands to blow some more, but couldn’t reach
the traveler with his breath. “All right, all right!”
the Sun called out. “You’re done. Hup, one, two, three!
Back to your quarters! Leave this job to me.”

The Sun looked at the traveler and smiled,
then lobbed at him a bright orange tennis ball,
and then one more, and then another one,
then three at once, … then kicked into high gear.
Two lovely “sunbeams” teased the man and fanned
him with beach towels, then got a little wild
as they undid each button. You could hear
the crowd chant, “Take it off!” in rowdy fun—
coat, sweater, shirt—until he’d stripped them all.
The Sun bowed low. The troupe left hand in hand.
One turned and cried, “You know the point, of course—
that warm persuasion wins you more than force.”

And that was it: some drama students’ tricks
played out, unscheduled, forty years ago,
saying what we forgot, but need to know
in love and loss, in war, in politics.
In class I heard deep thoughts expounded well;
what I recall, though, is their show-and-tell. 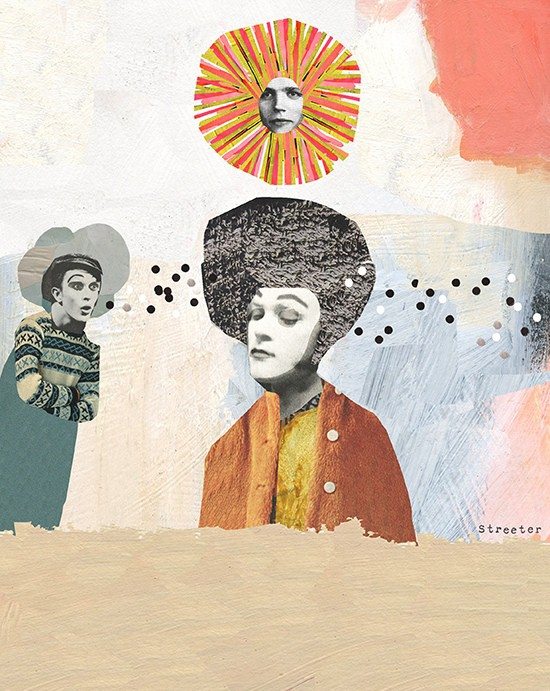 Bruce McBirney recalls the spring afternoon when he and classmates performed their show in front of Foley Pond. Pat Rude ’76 and Steve Diamond ’76 were the ringleaders, says McBirney. The troupe waited until about noon, when students were leaving their last morning class. Then, like a flashmob today, McBirney says, the players began their five-minute, spontaneous play.

Steve Diamond ’76, who has worked in theater in the United Kingdom since moving there in 1978, recalls forming an “underground organization” with Pat Rude called “The Clufton Bay Bridge Sub-Committee.” The dramatization of Aesop’s fable was one of their productions. “ ‘The North Wind and the Sun’ — ah, yes! Our chosen venue was outside Foley Pond, because we had a captive audience of everyone who was sitting on the lawns. … Our motivation was probably quite shallow, but it didn’t stop us from approaching this with a sense of style and adventure! I suspect people thought we were a little bit crazy, but that wasn’t a bad thing.”

Charles Carlstroem ’76, now a psychiatrist in Long Beach, says the troupe, a “motley crew,” liked the spontaneity of the production. Yet, they had a smattering of purpose: “to wake people up through a common experience, even if it was a common experience of puzzlement. It was a comical project to keep them from being self-absorbed.”