I Learned This From Paul 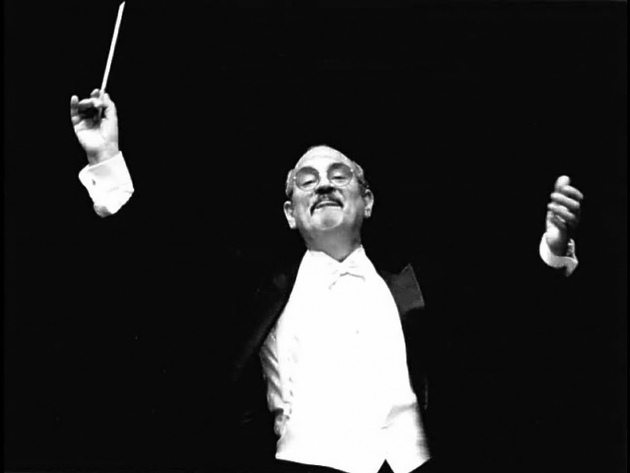 As a young child growing up in a musical family in Redondo Beach, I enjoyed occasional Sunday drives to North Hollywood to hear the choir at St. Charles Borromeo Church. After Mass, my parents would usually visit with the young conductor, Paul Salamunovich, who was gaining notoriety around the Los Angeles archdiocese as well as around the country.

A few years later — I was probably 12— the choir board at my home parish invited this noted conductor to come to Redondo for a series of choral workshops. Since I was a budding musician and my parents were choir members, I sat in on the workshops. I remember watching this dynamic conductor and hearing him rehearse the choir on works I would sing years later under his leadership.

Although I didn’t realize it at the time, a seed was being planted that would be important to my career. I remember him scolding the tenors to not sing as if this were “Celeste Aida,” but, rather, as if praying through the music. Basses were cautioned not to sound so angry, altos to sound like tenors in falsetto and sopranos not to wobble! As he did throughout his 60-year career, he molded a group of singers into his own with the sound that would eventually be his hallmark. No matter where he was or the make-up of the group he led, for that moment they would experience the unmistakable “Salamunovich sound.”

My most important and long-term association with Paul began in 1970, when I returned to Los Angeles from studies in Germany and to complete my undergraduate music degree at Mount St. Mary’s University. In addition to singing in the Mount Chorus and the Mount Singers (joining with men from Loyola), I also had the privilege of serving as Paul’s rehearsal accompanist at both the Mount and Loyola/LMU for the next nine years — this is where I learned to think as a conductor. Hearing the master teacher draw exquisite sounds from singers, very few of whom were music majors, was thrilling and enriching. Watching his hands sculpt raw sounds into flowing phrases, rich harmonies and a full dynamic spectrum — a Michelangelo-like musical sculpture — was the best education one could imagine.

When I trained young singers as I began my teaching career, I could imagine only one way of approaching choral singing. I wanted to start passing on to them what I had learned from Paul. I still work that way, ever influenced by those magical moments I encountered singing in the college choirs and, later, his church choirs. I got spoiled with the Salamunovich sound and always return to the beauty with which he inspired so many singers and conductors.

I often recall Paul’s nonacademic approach to music making. So many of his methods had developed out of his own experiences as a singer, experiences encompassing so many styles of singing from Gregorian chant to the great choral-orchestral works to soloing for Igor Stravinsky and singing jazz with Stan Kenton. He brought all of this to his teaching. Purely technical directions were so often transformed into beautiful life experiences, both simple and deeply emotional. And thus the music was always alive.

The Salamunovich sound was built around a certain richness of the vowel sounds. That approach ensures the beauty in the singing but also instills a level of intensity without anything being forced — “intensity but with restraint” as he described it. Rather than allowing a choir to just sing the notes on the page, Paul’s approach assures the reflection of the emotion of both music and text. When I begin each school year with singers new to this concept, I initially work to establish the absolute tone softly. Once that is achieved, volume can be added without losing the beauty, richness or intensity. I learned this from Paul.

Another aspect I remember so vividly from my work with Paul is the constant sense of motion within the musical phrase, as it begins and as it progresses. Nothing is ever static in the music; long, held notes must stay alive. Even how one breathes in the music must ensure a sense of forward motion. With the addition of intensity in the singing, one always feels that the phrase is going to continue, that the choir has something more to sing. The inevitability of the musical phrase is something I learned from Paul.

Over the years, I marveled at Paul’s mastery of concert programming. When picking repertoire, whether for a Christmas concert with the LMU choirs, a 30-minute appearance with the LMU Men’s Chorus at a national choral conference, or simply a 10-minute entry with the Consort Singers at the annual intercollegiate choral festival, he filled each presentation with cohesive yet contrasting selections.

These works might represent different historical periods, or draw from strikingly different performance styles, or, more specifically, move from Gregorian chant to Brahms or Verdi to an arrangement of “Shenandoah” or a rousing medley of cowboy songs. How thrilling it was to journey through a virtual travelogue of musical characteristics and colors. No two pieces ever sounded alike! The fact that the singers were performing contrasting styles was not the most cogent issue, but, rather, how they exhibited these distinctions through varying gradations in tone quality. In so many settings — from his own home concerts with the collegiates, the church choir, festival or workshop choirs, or professional singers — Paul’s mantra was always “make the tone fit the style.” I learned that from Paul.

Now, as I conduct concerts in Sacred Heart Chapel where the beautiful sounds he created still seem to echo, I am constantly aware of the gifts he shared. I learned so much from Paul.