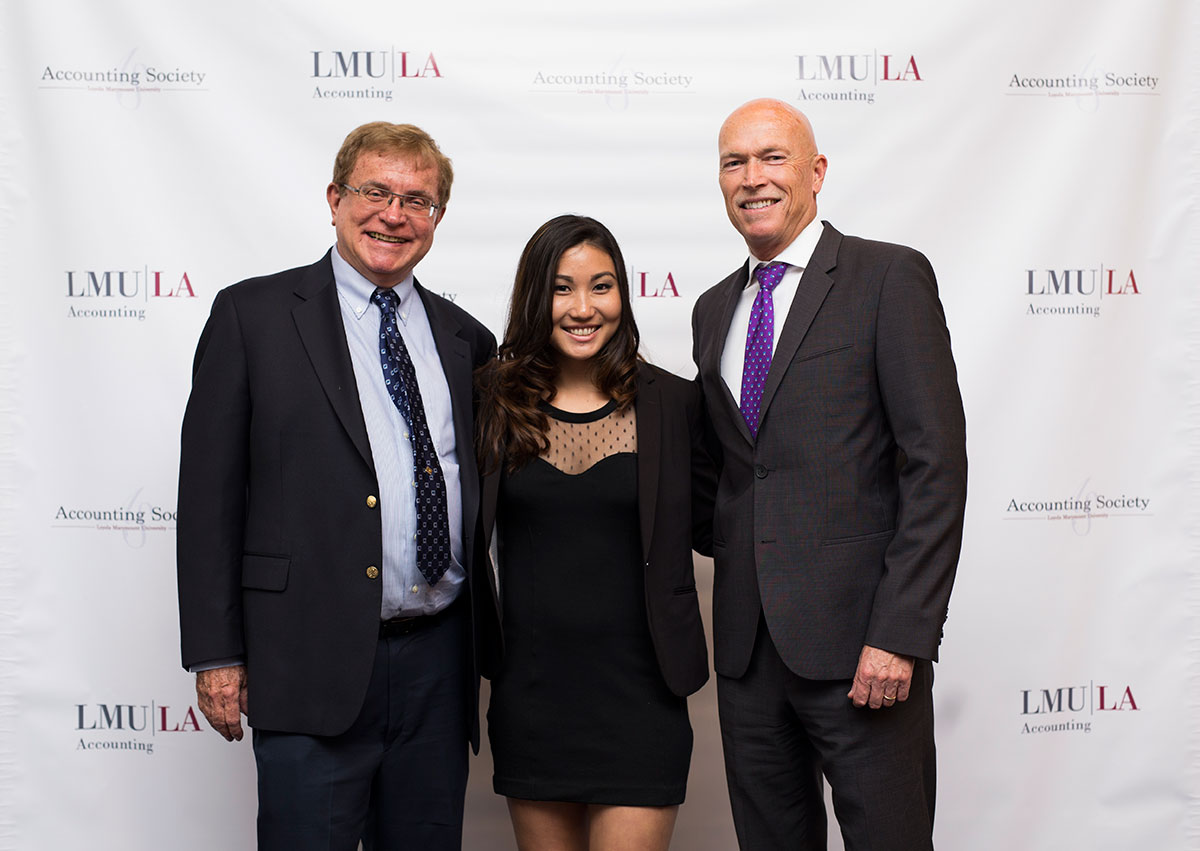 Hindman had taken Falcon’s two introduction to accounting courses in the College of Business Administration more than three decades ago, when Hindman was an LMU sophomore.

During the years since, Hindman built an extraordinary career that culminated with him serving as executive vice president for finance and business development and chief financial officer of Allergan, the pharmaceutical giant. Hindman was also president of the philanthropic Allergan Foundation.

“I sent him an email,” Hindman recalled. “I said, ‘Professor Falcon, I really appreciate that you introduced me to accounting, and everything you did. It sparked an interest with me and led to a career.’ ”

Falcon replied, assuring Hindman that he remembered him. Falcon soon invited Hindman to join the CBA Accounting Advisory Board, and Hindman said yes.

“It was very touching to be able to reconnect with a professor who meant so much to me,” Hindman said.

That initial correspondence led to further LMU involvement. Hindman became chair of the Accounting Advisory Board. He visited campus to speak to students about the profession. He donated to the Accounting Alumni Scholarship and to LMU’s Greatest Needs fund. He came to know Falcon’s two sons, who hold LMU accounting degrees.

In 2013, after 34 years on the bluff, Professor Falcon retired. He went out in style, having been named Accounting Professor of the Year in 2012. The university and Hindman wanted to do something to further honor the former faculty member. So, two-and-a-half years later, Hindman funded the Alan H. Falcon Endowed Scholarship in Accounting. The first scholarship was awarded at a banquet this spring. Hindman and Falcon sat together and met the student who received the gift. “It was good to see someone receiving the benefit of the scholarship,” Hindman said.

Hindman — who worked in the U.K., New York and California during his celebrated career — knows how much he benefited from Falcon’s teaching. “He just was an excellent professor. He not only explained things very thoroughly, he was logical. He took an interest in the students. He was very available for any help you might need,” Hindman said. “He also had a way of talking about how accounting was the language of business.”