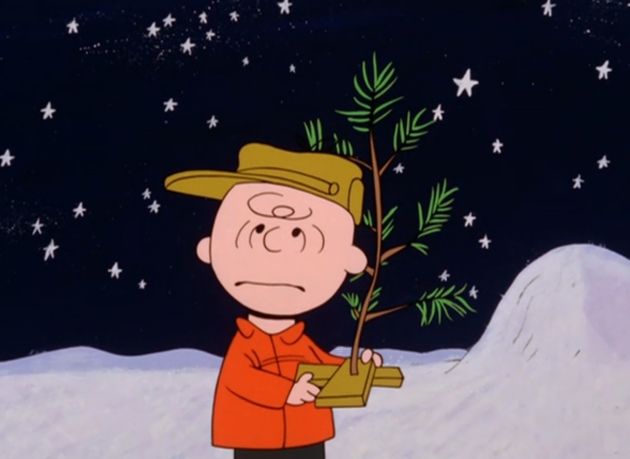 Mere hours, it seemed, after Thanksgiving cleared out and parking-lot pumpkin patches gave way to Winter Wonderlands, one of my neighborhood tree lots decided to bypass those ceiling-scraping Douglas Firs as its seasonal showcase out front. In their stead stood a spindly, listing underdog — a clever interpretation of that imperfect, evocative yuletide symbol — the modest little tree made famous in “A Charlie Brown Christmas.”

For late-boomers and early Gen-Xers, it might come as a sobering shock that “A Charlie Brown Christmas” is sliding into its 50th year — as for most of us the first experience of the simplicity of that story feels at turns like forever ago and yesterday.

While the show is not the first animated Christmas special, (“Mister Magoo’s Christmas Carol,” in 1962, would claim that spot), it set a distinct tone and carried a contemplative message underscoring the true meaning of Christmas — the miracle birth of the baby Jesus.

Centered around Charles M. Schulz’s indelible “Peanuts” comic strip characters and the travails of making a Christmas pageant, Schulz figured going in that it was a gamble — with a solidly religious focus and its arty piano-trio jazz score that swirled like drifting snow. But the Charlie Brown tree, the Vince Guaraldi jazz score and Linus’s earnest Luke 2:8-14 recitation are now instantly recognizable touchstones.

At what point does a custom become tradition? Or, for that matter, when does an old-standby evolve into a classic?

For a show with such an enduring legacy and out-of-the-gate audience embrace, the special’s beginnings were far from auspicious, says Tom Klein, associate professor and chair of the Animation program in LMU’s School of Film and Television. As the story goes, “Time” magazine showcased the Peanuts characters as their cover feature in April 1965, which served as the impetus for a holiday television special that Coca-Cola might sponsor. Schulz was told midweek that the pitch would need to land in time for a Monday review. He hit the deadline, and the Coca-Cola reps bought in. With little-to-no lead-time, the show went into production with animator Bill Melendez as director and Lee Mendelson as producer, debuting Dec. 9, 1965. “Basically,” says Klein, “that enduring classic would come together overnight.”

In coming years, however, as the business of television would change, bits and pieces of the special were being elided to make room for more commercials. First seconds, removed surgically, then minutes, as if by machete, until in later years entire scenes and songs were missing. “It’s just ironic,” says Klein, “that the very message that is central to the story — the commercialization of Christmas — was the very thing eating away at the episode itself.”

By 2002, restoring the special became a bit of a balancing act, since television time-frames had become so different. With commercials, the episode ran closer to 45 minutes. Melendez, who approved scripts after Schultz’s death in 2000, was called in to work on the 2002 version. He created the Peanuts show that includes the vignettes, known as “Charlie Brown’s Christmas Tales.” (ABC will air “A Charlie Brown Christmas” and “Charlie Brown’s Christmas Tales” on Tuesday, Dec. 16.)

In digging into this story, Klein wandered into two serendipitous connections that now loop LMU into the Charlie Brown legacy — and animation history. In “Charlie Brown’s Christmas Tales,” Charlie Brown is lying in bed and tacked on his wall is an LMU pennant. While there has been speculation about the why, there’s no obvious explanation. Later, in 2005, Melendez, approached the university to donate a piece of equipment. Not just any hand-me-down, but the very camera that shot the beloved Christmas special. Why the gift was made to LMU, to Klein’s knowledge, also is a mystery (Melendez died in 2008).

“In our school, we emphasize classical traditional animation techniques in the first year,” Klein explains, “and it culminates with filming in the traditional manner on this camera, the same camera that not only shot the Christmas special but every special after it.”

With this year’s escalating controversy over Black Friday shopping edging into the very heart of Thanksgiving Day, the special’s simple message, it seems, couldn’t feel more prescient. Klein agrees: “As more and more retailers made people work the holiday, I think the special — with its quiet stance, slow earnest pace — is a reminder. It’s still a potent comment against consumerism.”