Thirty years ago, Philippa Drennan joined her colleague John Waggoner in a study of Joshua trees in the Mojave Desert. His initial research that concerned the distribution of Joshua trees within a range of altitudes in the remote desert became long-term monitoring of new growth and flowering of specific trees. Changes in climate and environment have affected the trees, and Drennan describes here what they have observed through their research in the Mojave National Preserve. 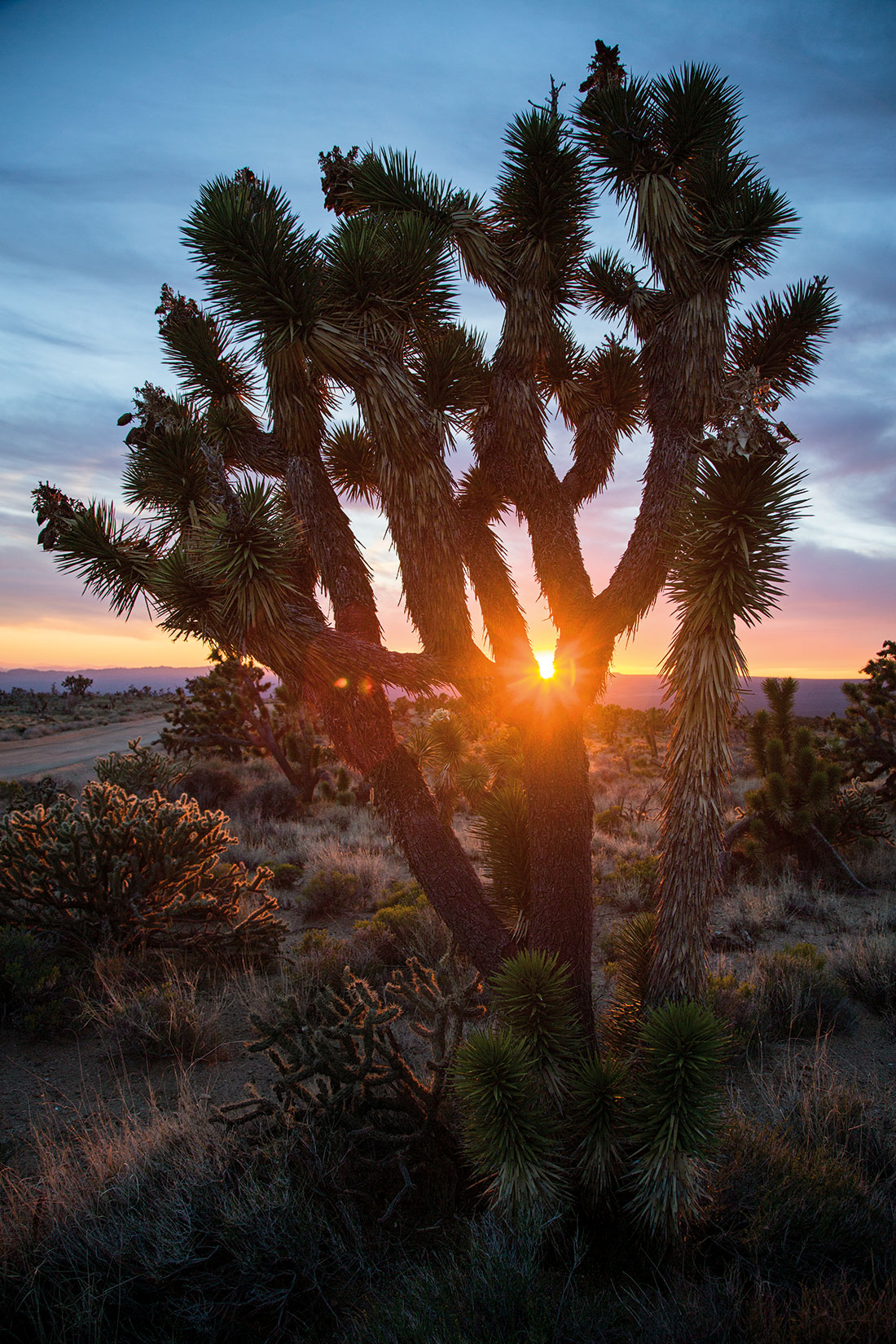 Phlippa Drennan is a professor in the Department of Biology in the Frank R. Seaver College of Science and Engineering, where she teaches plant biology and ecology. Drennan grew up in South Africa and earned her Ph.D. from the University of KwaZulu-Natal with a specialty in mangrove and estuarine biology. She has been a member of the board of Friends of the Ballona Wetlands since 2001.

Click here to see a slideshow of some of the spectacular scenes in and around the Mojave National Preserve.

The Joshua trees of the Mojave Desert would not exist without the help of a single kind of tiny moth, and vice versa.

These two species, one that lives for hundreds of years, the other for only a few weeks as adults, are linked together biologically. Yucca brevifolia, the scientific name for the Joshua tree, must have its flowers pollinated by the yucca moth, Tegeticula synthetica, and no other. The moth pollinates only Joshua trees and is dependent on the seeds of the tree to feed its larvae. If either species should become extinct, particularly over a short period of time — in scientific terms, a few hundred years — the chances are that the other one will also cease to exist.

The moths, which have spent a year or more as pupae hidden in the ground, come out as adults annually from mid-March through mid-April. The Joshua trees are in bloom only for that short period as well. At night, the moths find each other inside the Joshua tree blossoms; mating presumably occurs there, and the female flies off to lay her eggs in and pollinate several flowers on different trees. After each event, she picks up new pollen from the flower before flying to the next plant. Some years nearly every Joshua tree blooms; but in some very dry years, no trees provide blossoms. Yucca moths coming out of pupation then do not produce young.

The individual trees that John Waggoner and I study are found in the Mojave National Preserve at a site some 20 miles east of Kelso, Calif., and 100 miles from Barstow. At first, we studied five populations of Joshua trees found along a gradient of increasing altitude from the lowest location, in the warm valley basin where Joshua trees occur mixed with creosote bushes, to the uppermost locations, where Joshua trees transition to a pinyon-juniper woodland.

Joshua trees are seen as an indicator species for the Mojave Desert. After three decades of counting the branches and the flowers of the individual trees, we have come to know them by sight, and we have seen a number of changes. Some of our observations are to be expected, and some are indicative of the changes that are affecting the area. Flowering and successful reproduction occur more frequently in the cooler and moister conditions of the upper elevations of the gradient as well as in wetter years. At the warmer, drier, low elevations, Joshua trees are dying at a rate that exceeds replacement. Stressed trees have fewer leaves per branch, and the branches are no longer held upright. This is especially poignant given that the Joshua trees were so named by Mormon settlers who saw them and were reminded of the biblical story of Joshua reaching his hands to the sky in prayer. Branches are lost in increasing number, and eventually the entire tree falls to the ground, remaining there for many years before being completely broken down. Thus, the range for the Joshua trees is contracting, an outcome that has been modeled by other ecologists and is observed in the fossil record associated with a sudden warming event 12,000 years ago.

Some changes have natural causes. Two upper populations of trees that we were monitoring were lost unexpectedly when they were burned in the lightning-caused Hackberry Fire of June 2005. The fire, which burned for four days, was so intense that the mortality of the trees was greater than 90 percent. Our comparison of photographs of the site from 1986 to those taken in 2005 suggest the underbrush was more extensive at the time of the fire. Although the fire did induce resprouting of the Joshua trees, almost all sprouts were dead within three years following the fire.

Thus, population renewal will require input of seed from surviving Joshua trees and their interaction with the tiny yucca moth. However, stresses in the form of higher temperatures and reduced water availability at lower desert altitudes will move upward in the desert as the predicted climate changes for the Southwestern United States are realized. The desert does not have unlimited higher altitude acreage, so the future habitat availability for Joshua trees does not look secure. And the future for the moth?