When Priscilla Ocen heard about handcuffs and chains being applied to pregnant prisoners being taken to and from hospitals, or in the process of giving birth, she couldn’t believe it. “It seemed so shocking that this was happening,” recalls Ocen, who was a civil rights lawyer in San Francisco at the time. “I spoke to some colleagues, who said, ‘This is standard practice.’ ”

Ocen, now a professor at Loyola Law School, was launched on a mission to draw attention to shackling and send it to the dustbin of history. In a paper for the California Law Review, she quoted James Baldwin writing of his hopes that “the very sight of chains on Black flesh, or the very sight of chains, would be so intolerable a sight for the American people.” But it has taken state legislation and legal challenges — typically turning on an interpretation of the Eighth Amendment prohibition of “cruel and unusual punishment” — to combat the practice, which has been outlawed in California but still exists elsewhere.

Shackling may involve the use of handcuffs, waist chains or leg irons. The practice, says Ocen, exerts a number of effects on women who experience it. “The profound sense of shame and humiliation and trauma follows women through their entire lives,” she says. “And there are significant risks of injury.” Women have suffered damaged nerves in their backs and injured hips, and falls can imperil both mother and child. Childbirth is for many women a mix of the intensely vulnerable and the almost sacred; for a woman who’s chained down, it becomes something very uncomfortable to recall. 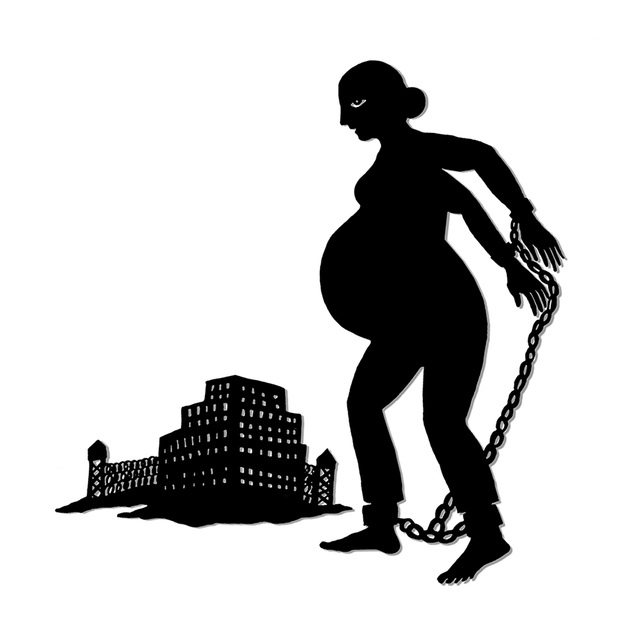 As damaging as shackling can be, no federal law forbids it. Rules and regulations tend to vary by state or by specific facilities. In some 30 states, the issue is left up to the prison to decide on its use or there is no policy at all. Even in states where the practice is forbidden, Ocen says, the practice still occurs.

“The other challenging thing about prisons,” she explains, “is that we don’t know what’s happening.” What goes on in a jail, prison or detention center is hard to figure out. The incarceration system may be as opaque as any institution in a democratic society (hence our fascination with shows like “Orange is the New Black.”) “The only people who see what’s happening on a day-to-day basis are the people who are incarcerated, and the people who work there.” Legal groups and victims-rights advocates come in with good intentions, but the events of daily life on the inside can remain obscure.

While women are shackled regardless of race and gender, Ocen sees the problem as having a special resonance for black women: The practice, she says, exists in a continuum that includes slavery, chain gangs and Jim Crow laws. And since black women are imprisoned far out of proportion to white women — the rate per capita is close to three times, nationally — shackling becomes, she says, a racial issue.

Ocen’s interest in racial justice goes back to childhood. “I’ve wanted to be a civil rights lawyer since I was in third grade,” she recalls. Her eyes were opened when she wrote a book report on Thurgood Marshall that looked at his work arguing against school segregation in Brown v. Board of Education as chief counsel for the NAACP. “I saw the transformative effect an attorney could have on the country.” Her mother’s memories of attending an integrated school in Washington, D.C., — not long after the Court’s 1954 ruling — made the issue personal.

Decades later, Ocen still sees everything through the lens of history, and she says the law is impossible to understand without a firm sense of the past. Taking the long view of the issues of shackling, as well as racial justice in general, she says, leaves her both heartened and frustrated.

“My students and I are reading about the post-Reconstruction era,” she says. “You had thousands of people being freed, African Americans being recognized as citizens, all of this progress. But we had chain gangs, and Black Codes,” which limited the rights of freed blacks. “You often see what my [UCLA] colleague Kimberlé Crenshaw calls reform and retrenchment. I’m optimistic about out capacity to change, but our institutions tend to be entrenched and difficult to move.”