For more than three decades, DDT was produced at the Montrose chemical plant in Torrance and dumped into Palos Verdes’ coastal waters. In 1996, the offshore site, considered by some the largest deposit of DDT in the world, was added to the EPA list of Superfund sites. Over the years, DDT spread to the Santa Monica Bay, where the accurate measurement of the pesticide’s presence — the focus of Rachel Adams’ research — will be crucial for assessing water quality in the bay.—The Editor

From time to time, Rachel Adams heads to Home Depot to stock up on thin plastic sheeting. She and her students clean the plastic with a solvent and then set dozens of strips of it in Santa Monica Bay for a month. When they retrieve them, the sheeting will have absorbed toxic DDT left from one of the worst toxic waste disasters in U.S. history.

Adams’ research aims to improve our ability to measure certain kinds of toxic waste in the environment. Her goal is to help prevent future environmental calamities.

“From our experience with things like DDT, we can create models to make decisions about the chemicals we plan to use to control pests or for other industrial uses,” says Adams, associate professor of civil engineering and environmental science in the Frank R. Seaver College of Science and Engineering. “We can use these models to predict how much will end up in the environment. And we can estimate the exposure for organisms living in the bay.”

These concerns weren’t even on the horizon when the Montrose Chemical Corp. plant near Torrance, California, jumped on the DDT production bandwagon in 1947. Montrose dumped its DDT waste into the local sewer system run by the Los Angeles County Sanitation Districts, Adams says. The sanitation districts in turn released it into the ocean at the Palos Verdes Shelf off the coast. From there, currents carried some DDT northward to the nearby Santa Monica Bay, she says. Montrose Chemical and other area companies disposed of some 1,700 tons of waste from the late 1950s to the early 1970s, according to federal regulators.

The DDT on the Palos Verdes Shelf constituted an environmental nightmare. Decades ago, when federal regulators surveyed the damage, they found that it had spread out and embedded itself in more than 17 square miles of ocean floor, an area larger than 8,000 football fields.

Many chemicals dumped in the ocean would simply degrade. Not DDT. “It’s hydrophobic,” says Adams. That means it is repelled by water. So the dumped DDT worked its way into the ocean sediment and sat there. But enough has escaped from the sediment over time to unleash havoc on some fish and bird species, including the Bald Eagle. It is this DDT that Adams measures.

It is tricky work because environmental changes — a rise or fall in water temperature or changes in the water current — can influence the results. These factors must be taken into account to get an accurate reading.

The amounts of DDT Adams detects in the Santa Monica Bay appear miniscule — one trillionth of a gram per liter. “But the problem is that DDT accumulates in fatty tissues of fish and other food animals, then ends up in the highest level of the food chain — people and birds of prey,” Adams says. 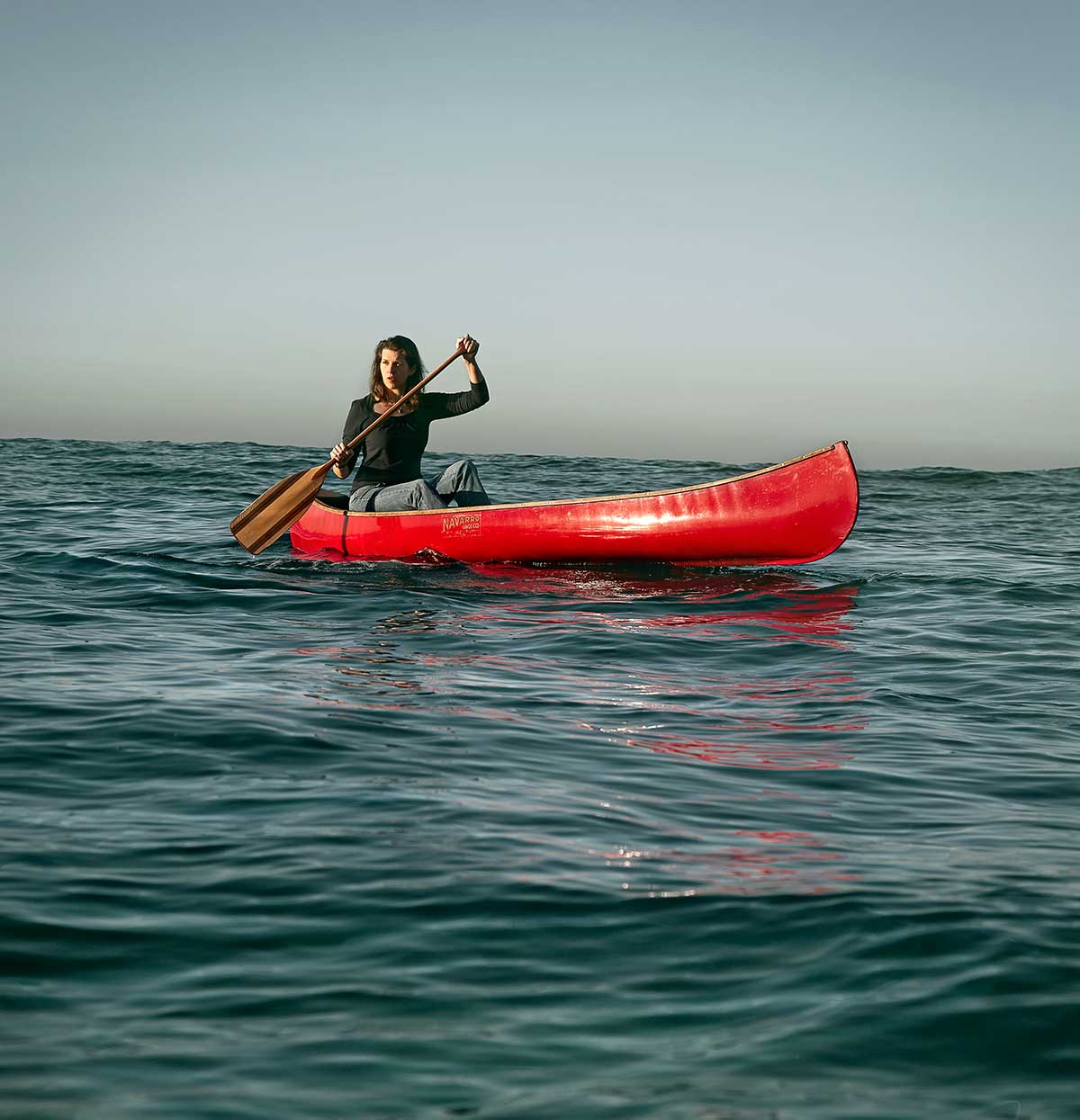 This story really begins with an age-old conflict — man vs. insects. Insects spread devastating diseases such as malaria and destroy untold quantities of crops. In 1939, Swiss chemist Paul Müller tried out DDT on insects. It killed them quite effectively, and the world embraced it. Cases of malaria fell sharply. Crop yields rose. Better yet, DDT was thought to be completely harmless to humans. Müller won the 1948 Nobel Prize in Physiology or Medicine.

But before that, seeds of doubt appeared. In 1945, the U.S. Fish and Wildlife Service warned that birds were dying. So were fish. “It kills useful as well as harmful organisms,” the wildlife service warned. “Its unrestricted use could conceivably do more damage than good.”

These concerns came to the forefront with Rachel Carson’s “Silent Spring,” the 1962 book that ignited the environmental movement and helped bring about a ban on domestic use of DDT in 1972. (The pesticide continued to be produced for export until the mid-’80s.) By then, DDT was nearly everywhere and was regularly ingested in tiny quantities by people in their food.

Although the pesticide was first thought harmless to humans, studies have documented a variety of human ills tied to DDT exposure. For instance, Adams says, they “found a link between DDT and lower cognitive abilities in children.” Other studies have linked it to premature births and to breast cancer in women.

For these reasons, regulators want to limit human exposure to the pesticide. Even today, that remains an enormous task. In 2002, federal officials reported DDT had been found in more than one quarter of the more than 1,600 toxic waste sites on the government’s priorities list of polluted sites.

But DDT can turn up almost anywhere, not just in toxic waste dump sites. It was widely used in U.S. agriculture on food crops. It was sprayed in cities, Los Angeles among them. Wind, rivers and ocean currents often carried it far from where it was used or dumped, even to the Arctic. And it can take hundreds of years for DDT to break down into harmless constituents.

In 1995, federal regulators came up with three options to clean up the Palos Verdes Shelf — dredge the polluted areas; cap, or cover, the pollution with a layer of sand; or do nothing. All options had their drawbacks.

Dredging could stir up the DDT and put some of it back in the water, Adams says. She saw the same conundrum earlier in her career, when her research took her to New York’s Hudson River, where General Electric had dumped huge amounts of toxic PCB (polychlorinated biphenyl). Capping the ocean floor at the Palos Verdes Shelf with sand could seal it off while the DDT slowly degrades; however, placing sand accurately on a contamination site is difficult when the there may be 30 or more meters of water between the surface and the floor of the bay. The third option was to do nothing and let time take care of it. In that case, Adams says: “The sediment would be a sort of perpetual source of DDT until it’s all gone. DDT is broken down by microorganisms, but it’s a really slow process.”

In 1995, when the U.S. Army Corps of Engineers estimated the cost of Options 1 and 2, sticker shock set in. Dredging could cost upward of $1 billion and would leave the government with mountains of toxic sediment. The cost to incinerate the sediment could run billions more, according to a Los Angeles Times study. Option 2 — covering polluted sediment with sand — could run a cheaper $550 million. “Short of the Exxon Valdez [oil spill in Alaska], there has never been a cleanup costing that much,” one expert told the Times at the time.

It was a choice of questionable options — do nothing or spend a lot of money. So the U.S. Environmental Protection Agency studied the matter for another 18 years. Then, in a 2014 report, the EPA announced that vast amounts of toxic waste had simply disappeared, so much so that the goal might have been achieved through limited capping already completed. The EPA is now double-checking its findings.

But for the moment, ample amounts of DDT remain on the sea floor. It’s too early to tell whether things are getting better or worse in the bay, Adams says. Only recently has the combination of improved sheeting methods and advanced instrumentation allowed researchers to measure DDT at the trillionth-of-a-liter scale. Adams has been working with plastic sheeting detectors since the late 1990s when she was in graduate school. And though great strides have been made in using this low-cost toxin detector, she believes researchers can learn to use it in ways that yield even more accurate measurements. Toward this end, Adams and her students are collaborating with researchers at the Southern California Coastal Water Research Project and USC.

Adams’ research has a broader goal than simply measuring the fallout from one toxic catastrophe. She hopes the technology can be used to help create models of how toxins move after they have been introduced into the environment.

Movement is an important area of research because toxins often travel far from where they’ve been used or dumped. Understanding this movement may help prevent future environmental disasters, she says.

Doug McInnis is a freelance writer in Casper, Wyoming, who writes frequently for LMU Magazine. He has written for The New York Times, Popular Science and other publications.