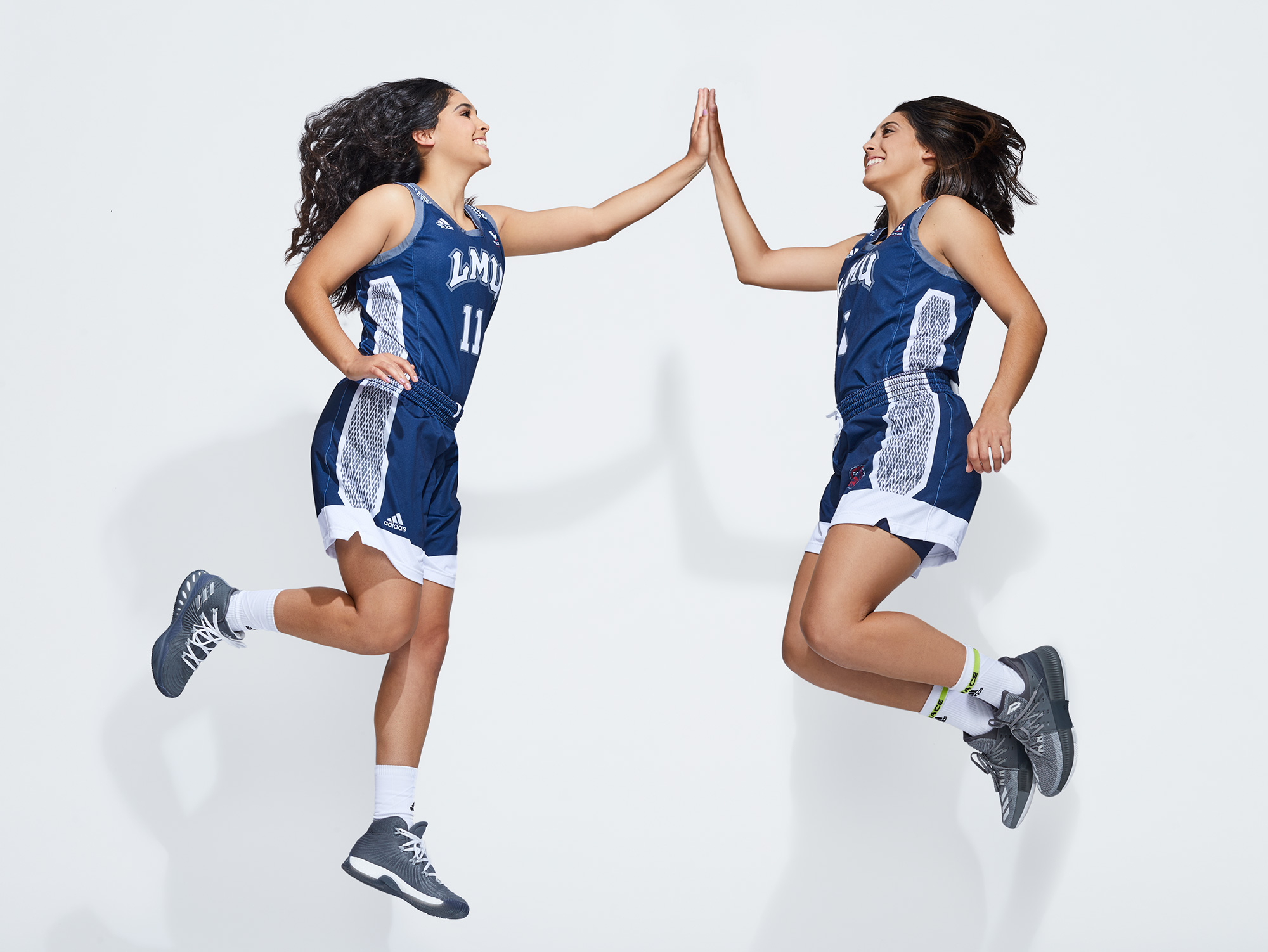 Juniors Andee, left, and Bianca, right, Velasco are sisters and guards on the LMU women’s basketball team. Both players had an immediate impact on the women’s program when they arrived together, Andee appearing in all 31 games in her freshman year and Bianca in 30. They are entrepreneurship majors in the College of Business Administration. They were interviewed by Editor Joseph Wakelee-Lynch.

You both play the guard position and are often on the court at the same time, each getting significant minutes. Are you roommates, too?
BIANCA: We’re living in an off-campus apartment with a teammate, and this is the first time that we’ve had our own room in our entire life, including the past two years in a dorm room. It’s nice to have privacy, but oftentimes we find ourselves yelling at each other to get the other one to come to our room.
ANDEE: We just sleep in separate rooms, but other than that we’re always in the same room together.

So, now you have an opportunity to finally be alone and you’re just wasting it?
BIANCA: Yeah, we don’t like to be away from each other too long.

Was there a time when you were both younger when one of you had to accept that the other was better?
BIANCA: Definitely. Andee was really a prodigy. She was tinier, half the size of everyone, but so good at basketball. For me, it was a completely different story. I was six inches taller, and I wanted to do ballet and cheerleading. Basketball was hard for me to pick up. But I hit an age in middle school when I really fell in love with the game and started taking it seriously. Even in high school, Andee had a burning passion for the game. Then I learned, and I soon got that passion.
ANDEE: I’m 14 months older, and at that age, 14 months is a big difference. Then, Bianca did not like basketball. She was a goofball — always laughing. She was funny and really sweet. But when she hit middle school, she started to love it and work at it. She started to get better, and she’s definitely proven herself as a D-I athlete.

Bianca, when you knew you wanted to be better, did you say to yourself, “I have to be as good as Andee?”
BIANCA: Andee was definitely the measuring stick, especially considering all the accolades she had: “Andee is the best point guard in the nation.” “Andee is the best point guard in California.” And I agree: Andee is the best point guard. I remember the day when I sat down and wrote down everything I was good at, what I needed to get better at, what Andee was good at, and how I could push her. I didn’t want for the rest of my life to give half of my effort. Once I gave it my all, I realized I could be just as good as her in some categories if I wanted to be. Andee really pushes me, and I really push her.

Athletes live with competition all the time but have you as sisters dampened its effect in your relationship?
ANDEE: When we were younger, we had a lot of sibling rivalry. But as time has gone on, we’ve grown closer. Competition will always be there, and we’ll always push each other. We keep each other accountable.

Once the game starts and you’re both playing, each of you is one of five teammates, not one of two sisters. Is being on the court the one place in your lives when you feel that you’re not sisters?
ANDEE: Bianca and I share a very special bond as sisters. On the court, I know she’s my teammate, but I have three other teammates. I see Bianca as my teammate and my sister, but I don’t let those two things collide in any way.
BIANCA: The sister thing doesn’t disappear. We can read each other really nicely on the court. But we’re very good at being teammates. We’re on the basketball team with 13 other girls trying to get to the same goal: to win.

This interview appeared in the winter 2017 issue of LMU Magazine.