A Conversation With Saeri Cho Dobson

Saeri Cho Dobson, associate professor of graphic design, talks about design as an expression of social justice and her work with students involved with community organizations. She was interviewed by Editor Joseph Wakelee-Lynch. 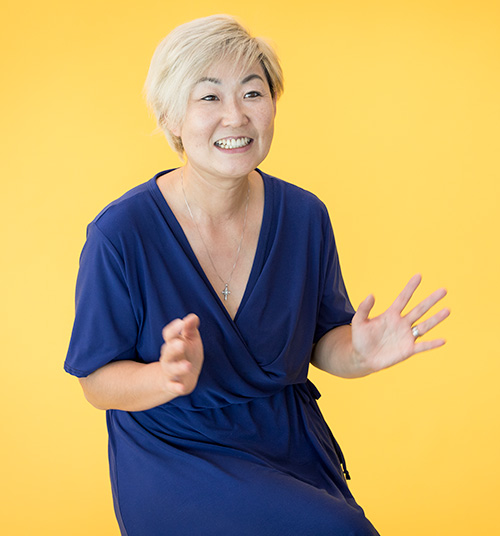 Saeri Cho Dobson is an associate professor of graphic design in the studio arts program of the College of Communication and Fine Arts. Her experimental art and design works have been exhibited in New Zealand, Mexico, South Korea and Los Angeles. She received an Artist-in-Residence grant from the Los Angeles Department of Cultural Affairs, and she works with adults with intellectual disabilities as a focus of her human-centered design philosophy.

How does a commitment to promoting social justice, which is part of the LMU (and Jesuit) mission, play out in design education?
Graphic design is not just the making of brochures or a newspaper. It’s a discipline of using word and image to persuade others. Before I was at LMU, I was a commercial graphic designer. My purpose was to make products stand out, through aesthetic appeal and typography. When I came to LMU, I realized design has a power to persuade through word and image.

Engineers are the architects of our built environment. Do designers, in a similar way, see themselves as builders of our visual environment?
They should. It’s very important. A graphic designer is an information designer. Information is a very important part of our life, and a designer has a big responsibility. There’s a lot of noise in the world. If you put some-thing out there, it must be important. A visual hierarchy is the most important thing I teach students. Certain information has to be seen first, and people can learn more about the deeper issues. So, a designer who designs something without any hierarchy, that’s just noise. You have to know how to block the noise and prioritize. That’s why education is very important for a designer.

You created a course in design entrepreneurship for design majors but other students as well. What is unusual about that course?
The design entrepreneurship class is conducted with the Center for Service and Action and involves nonprofits in Los Angeles. After students go there, they create a project. A group of my students worked with the Lamp Community in downtown Los Angeles, which has art and music programs for homeless people. The students developed a project to design a portable, solar-powered cell-phone charger for homeless people, who aren’t always welcome in cafes or restaurants as a place to charge their phones.

You lived your first 20 years of life in South Korea. Does a Korean aesthetic shape your own design?
I learned design after coming to America. My design is more westernized. When I first came here as an international student, I didn’t know that what I had was very valuable. LMU taught me that finding my own heritage, such as learning stories about Korean-Americans, would make my work more interesting.

Is there a difference in design standards between the U.S. and South Korea?
I think standards are different. If I were hired by leaders at a Korean company, they probably wouldn’t like my design. If they want me to bring a western atmosphere to a design, they’d probably love it. But a traditional Korean company is not going to hire me to do design. The visual has its own language, so I don’t speak their visual grammar.

Has the technology revolution of the past 25 years changed the way designers think about their work?
Yes and no. Milton Glaser, a famous designer, said, “Computers are to design as microwaves are to cooking.” A computer makes things faster, but you still have to think, you have to train your brain. In that sense, technology hasn’t influenced concepts. But technology gives you different platforms to present visual information. I have three children. My oldest, who is 17, still enjoys paper books, but the middle son has e-textbooks in middle school. Everything is on computer. My youngest is 3. What will it be like in 15 years? How will we teach? We don’t know what will change. It will be different, but there are certain things that do not change.